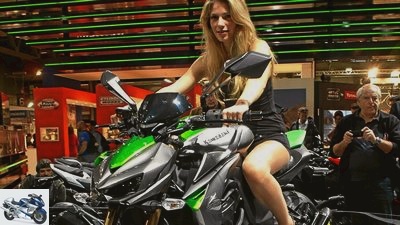 The year 2014 begins with the Eicma. At least if you think in terms of motorcycles. And there was a whole range of new models on display.

The Japanese manufacturers in particular had a clear message.

The Yamaha Motor Company’s president Hiroyuki Yanagi came to Milan especially. And his message was clear: the procrastination has come to an end, the gas is finally going again. Kawasaki only tried the European boss for the same message, but he also blew the same horn when he called the new one Z 1000 revealed: “There’s a lot more to come”. Although Kawasaki of the Japanese manufacturers mastered the crisis year 2009 best in terms of development, the first sight of the Z 1000 sprayed above all that brazen design and brave restraint are no longer so much part of Kawa’s credo.

The expectations of an ultra-hot naked bike based on the world champion motorcycle ZX-10R with its frame and engine remained unfulfilled. But what was clearly more spartan than before and with a really aggressive snout in front of the journalists was an exclamation point behind the message. Kawasaki calls it “Sugomi”, which translates as “strong aura”, and that is true.

The engine is well known and has already fired several Z 1000 generations. This year it has increased by three horsepower, got tamer control times for more pulling power and has a shorter gear ratio. According to Kawasaki, the 111 Newton meters are now at 7300 rpm and thus 500 revs earlier. The weight unfortunately remained at the level of its predecessor at 221 kilos. In the next PS we can already say more about the performance of the Z 1000 after we have ridden the bike. The Z press presentation will take place at the end of November.

BMW relies on the naked

As far as the highlight of the BMW appearance in Milan is concerned, we can already say a lot more in PS 1/2014, because the first driving test of the naked S 1000 R is also due at the end of November. But in view of the long waiting time and the many rumors about the naked bike, the Eicma was a revelation here too. The S 1000 R deletes an R from the name, but otherwise has retained a lot of the superbike genes. Apart from the pulpit with the demonstratively upright planted dashboard and the tubular handlebar, the R looks confusingly similar to the athlete.

In terms of data, however, something has clearly changed, because the Naked “only” pushes 160 hp. With such a capped peak performance, you can look forward to a big punch in the middle speed range. According to product manager Sepp Machler, BMW tickled out ten additional Newton meters below 7500 rpm. So the S 1000 R should really mill the road. At a basic price of 12,800 euros with the basic ASC electronics (prevents too much slippage), one can speak of a competitive price in addition to street fighter optics. If you want to spend more, you can order the traction control familiar from the superbike, the electronic chassis or even the sports package with Quickshifter.

Although it was already presented at the 90th anniversary celebration, there were of course a lot of eyes in Milan now
R nineT. The roadster with the boxer caused a sensation three years ago as a spartan and extremely variable design drawing. Some of this has been preserved, even if approval regulations and “common sense”, as is so often the case, had a clear influence. Nevertheless, with this motorcycle, BMW now has a cafe racer with rich retro elements and conversion potential in the product range and will thus attract new groups of buyers.

Ducati with a dream Panigale

Ducati boss Claudio Domenicali demonstratively juggled the tank cap in the Museum of Technology in Milan. It was a symbol of the attention to detail with which the engineers went about the superbike 1199 Panigale and transformed into the special model “Superleggera”. Of course, 65,000 euros is a proud price. But there are only 500 pieces, some of which have already been sold. If you get hold of another, you can look forward to top values. Bologna promises over 200 hp for the twin, which, together with the rest of the motorcycle, should weigh a maximum of 177 kilos when fully fueled. The magnesium monocoque and the carbon rear frame as well as the cladding made of the same material naturally play a huge part in this.

But even such little things as the titanium fuel filler cap in Domenicali’s hand add a lot of grams here and there that have been saved. For the fat increase in performance compared to the not weak-chested series Panigale, the valves were also made of titanium. Special pistons and a finely balanced crankshaft do the rest. This means that, after the Desmosedici replica, a real dream Ducati is coming onto the market again, and PS will be presenting it exclusively in the next edition.

We have to wait a little longer for the Monster 1200. The motorcycle, now equipped with the water-cooled Testastretta-Twin, takes the necessary step to keep up with the competition. In terms of style, it remains true to itself, as shown by the characteristic tank, which, however, no longer forces the driver far back as before. During the seat test, the 1200 looks much more modern and sporty, which is also supported by the performance data.

With 147 hp and a torque of 125 Nm at 7250 rpm and a mass of just 209 kilograms, the big Monster S will in future dance along with the super sporty Nakeds such as the Aprilia Tuono or the new BMW. When it comes to electronics, too, she is fully in the juice, has the extensive Ducati Safety pack with traction control and ABS that can be switched off on board. In February we will know how the whole thing is going, because only then will Ducati grant us a test date.

With the MT-09 has Yamaha finally independence again, but above all courage and innovative strength demonstrated. And that determination was also on display in Milan. Jorge Lorenzo and Valentino Rossi were picked up on top of that-
offered to convince the assembled pack of journalists of this. The two drove the new models into the factory hall that Yamaha had loaded for the start of the trade fair. Rossi himself not only presented the MT-09 Street Rally. No, he even drove her himself on his own dirt track around the corner for a promo video.

With wider handlebars, protruding footrests that are jagged for a good stand, and a flatter and harder seat, the Street Rally promises a lot of fun. In addition, the significantly wilder look and the strong three-cylinder are just right. If the price of the targeted 8500 euros can be maintained, we predict increased sales potential.

We speak that too MT-07 to. With it comes a powerful two-cylinder bike that, with 75 hp, should also find fans among experienced motorcyclists. Low weight (182 kg with ABS), good equipment and the powerful twin represent a very good basis for a top seller. Especially since the price should be less than 6000 euros according to Yamaha.

As with the brand’s third new motorcycle, which also evokes the good old days. With its air-cooled single cylinder, injection, kick starter and retro design, the SR 400 cites the successful SR 500 and makes it easy, especially for those who are fanatics to convert it into a tracker or cafe racer.

The sports fans at Honda made long faces. The new Fireblade is anything but a “fire blade”. Anyone who expected a visible and tangible step in Superbike was disappointed and here and there one was even told that the largest motorcycle manufacturer in the world and MotoGP world champion will no longer rely on great sport for customers like you and me.

This is the only way to explain why the CBR 1000 RR still has no spark of electronics – not even a modern ride-by-wire motor control. 181 instead of the previous 178 hp and the smallest interventions, Fireblade fans have to suffice as a reason to buy a 2014 version. If you have a few more bills left, you can order an SP version. It has an Ohlins chassis as well as a single bench seat and is 0.7 kilos lighter than the standard Fireblade. From a sporting point of view, it was Honda, because the numerous new models otherwise all belong to the middle class or completely different segments.

the CBR 650 F and the new VFR 800 F stand out a little. As the model name already suggests, the soft athlete CBR 650 F has been given a drilled out four-cylinder, which now delivers 87 hp and is structurally identical to the naked Hornet, which is now called the CB 650 F and has been completely redesigned. She now has a steel bridge frame opposite the Hornet’s backbone frame. Despite major changes, the weight remained the same, and still weighs 208 kilograms.

Incidentally, the NC models also got more cubic capacity. Instead of 700 it is now 750 cubic. The VFR 800 F is new and reminiscent of the success story of the legendary 750. The moderate athlete, who is particularly suitable for touring, has been freed from unnecessary ballast. The bulky twin exhaust system under the seat on the last VFR gave way to a single muffler on the lower right. However, the VFR has lost performance, even if only three hp (106 instead of 109 hp).
The front view is very successful, otherwise the motorcycle looked rather massive at the exhibition in Milan, its weight of 239 kilograms confirms the visual impression.

KTM stays on the ball

With the 1290 Super Duke R, the Austrians have just hit a really big nail for experienced and sporty motorcyclists, when the successful brand from Mattighofen lets little athletes loose on the youth at the Eicma. Perfectly conceived according to the modular principle, benefits KTM from an early strategy with Bajaj in India, where the single-cylinder Duke engines are built.

These are now appearing again in racers like the RC 125 and the RC 390 of which the latter will be used as a real racing version in the ADAC Junior Cup from 2014 onwards. KTM cannot be blamed for using the excellent image of the brand from the Moto3 class for marketing, just as it cannot be blamed for the lack of love for the design of the little athletes who will hopefully recruit youngsters for the sports class with their sharp looks.

Thanks to new investors from the real estate sector Bimota present a new model in Milan. With the BB3, the noble forge from Rimini presented a magically beautiful motorcycle with Bimota-typical milled parts, lots of carbon and the engine from the BMW S 1000 RR. It should produce 197 hp and be significantly lighter than the BMW superbike.

But more about the Bimota BB3 in the next issue, which brings us to the end of the tour of the Milan exhibition halls. The Eicma exuded a spirit of optimism among the Japanese – oh wait, there are still Suzuki too. But unfortunately there was really nothing new to see apart from the already introduced V-Strom. Hopefully that will change soon. Because the colleagues from Japan are fully on the ball and so are the European competition. We’ll see what’s new in 2014 – at Intermot from October 1st to 5th in Cologne.