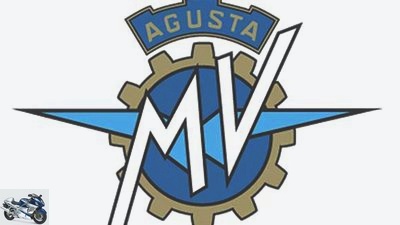 For the 105th company anniversary, the successful series of Harley-Davidson was stopped by the financial crisis. Declining sales depressed profits, the share price lost more than 70 percent, and the financing of ongoing business stumbled.

Sustained good sales in Europe stand in the way of the downturn and entice people to become more involved. MOTORRAD is investigating what role the newly acquired MV Agusta Group should play in this.

There is at least one trend in Harley-Davidson’s business statistics that has survived 2008 unbroken, if not unabated: In Europe, sales have increased as in the previous ten years. Although production was cut back by 18,500 units in 2007 and by 27,200 to 303,500 units in 2008, the traditional brand was able to sell 38,742 and 41020 motorcycles in Europe during these years. The small subsidiary Buell is even more dependent on its European customers with sales of 4,589 and 4,195 motorcycles and an annual production of around 11,000 units. Because of the currency relation between the dollar and the euro and the generally higher price level in the euro zone, the financial significance of this market is even greater. A Harley or Buell that is sold in Europe brings significantly more profit than in the USA.

as Harley-Davidson in the autumn of last year the MV-Agusta group with the brands MV Agusta and Cagiva must have been other than short-term financial considerations at play. Because the Italians can only benefit from the strong euro if they buy material or parts in countries with a weaker currency. In addition, the company is a very small manufacturer with an annual production of around 5000 motorcycles, its model range consists exclusively of super sporty motorcycles, the development and further development of which devours huge sums and is often overdue. The relationship between effort and expected profit does not seem too favorable. At least this calf has to be nursed for a long time before it can grow into a cash cow.

On the plus side and at the top there is what MV Agusta and Harley-Davidson have in common despite all the differences in company history and motorcycle culture: a name with a sound like Donnerhall. A myth, an aura, a reputation associated with the expression “strong brand” is only weakly described. They have sufficiently proven that the bosses at Harley combine dedication and economic sense in the maintenance and use of such a brand. The Harley managers want to apply the recipe, which is successful in this case, to MV in the long term, with adapted resources and development focuses, knowing that it will be just as impossible to reconcile supersport motorcycles with Harley-Davidson as MV Agusta with Cruising, you don’t even think about creating a company structure that brings the two brands into an obvious connection (see interview on page 12). At most, non-public synergies are conceivable, for example a common spare parts system within Europe. The question of how Harley and MV fit together is easy and quick to answer: not at all, and that’s a good thing.

Nevertheless, Harley-Davidson has had such a strong influence on MV Agusta like no other company that has been involved there so far. The new MV managing director, Mathew Levatich, speaks in favor of this. The 44-year-old previously held various positions at Harley-Davidson for 14 years. Since he started his job in Varese, there has been ?? that may be seen as an outward sign of the new epoch ?? instead of the earlier talkativeness about new developments, Harley-typical silence; the previous owner Claudio Castiglioni has not appeared in public anymore. He is still one of the directors of MV. His friend Massimo Tamburini, who uncompromisingly and ingeniously created dream motorcycles from motorcycle dreams, apparently did not want to face the foreign influence; he left MV at the end of 2008. Anyone who has followed the history of his previous creations from the Bimota YB 4 to the Ducati 916, MV Agusta F4 to the MV Agusta Brutale will not consider the rumor that he has resigned because he did not want to accept any specific deadlines to be entirely unlikely. 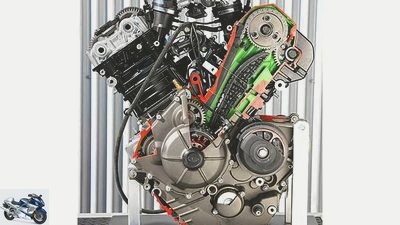 In the hottest version, the Buell Rotax-Twin makes 148 hp.

An important part of the legend of MV Agusta is missing, and Mathew Levatich cannot hide a certain embarrassment about the successor to Tambourini. Otherwise he wouldn’t say the? Tradition of outstanding products? to its quasi-successor. The vacancy in the management of the CRC (Cagiva Research Center) development department does not seem to bother at the moment. Former MV President Castiglioni pointed out the reason for this several times last year: Under Massimo Tamburini’s leadership, the CRC has launched three larger projects, which will be presented successively. By 2014 it will be clear what will be presented and when. The still raw prototype of a super moto single cylinder was shown under a Husqvarna emblem at the motorcycle fair in Milan in 2006; the author of this story saw the finished model for the series machine himself during a visit to Varese in summer 2008. Unfortunately, he was prevented from using his camera phone. The Supermoto MV is primarily intended to attract young customers, who can use it not only to buy a comparatively inexpensive motorcycle, but also to raise awareness of being a customer of a legendary brand. Your single-cylinder engine has typical MV features such as a lower exhaust camshaft and radially arranged valves. Since various prototypes with four-stroke engines appeared in the Cagiva-Mito chassis over the years, this engine could also serve as a drive for a street athlete.

A 675 with a three-cylinder engine developed in-house has not yet developed that far. After all, Castiglioni showed this engine to some of his friends in the summer of 2008; the colleagues from Motociclismo even used a photo of the real engine for their computer retouching of the 675s. So in this area the vision is authentic. The successor to the F4 is fully developed, but it was consistently kept secret even by the old MV government, because any speculation about a model change could affect sales of the F4, which is still MV’s most important source of revenue. Major changes to the technical basis are not to be expected, but refinements, a more modern appearance and revised ergonomics are. The most important thing about all three projects mentioned: According to insider information, the new management has given them all the green light.

And another new development was launched. Apparently work has started on a successor to the Cagiva Elefant 900. Designed as a motorcycle for desert rallies, the series-produced offshoot found a loyal fan base in the 1990s as the sportiest of all large enduro bikes. Many elephants are still lovingly cared for and driven with enthusiasm. Harley-Davidson has the right engine: the V2 of the Buell 1125 R, which was developed together with Rotax. The light and powerful engine is ideal for use in an Elefant 2. By the way, Cagiva is currently doing a survey of fans of the brand on the Internet. The acceptance of the model name “Mython” is tested. One can only hope that it is not intended for the Elefant successor. 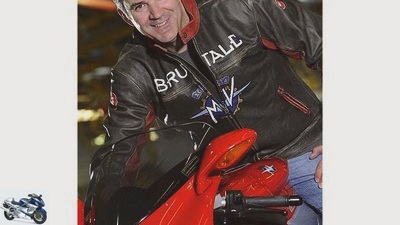 Mathew S. Levatich, 44, was managing director of MV Agusta until April 2009. He has been working for Harley-Davidson since 1994, most recently where he was responsible for accessories and accessory parts as well as for the in-house tuning manufacturer CVO.

? Shortly after Harley-Davidson bought MV Agusta, Harley’s profits plummeted due to the economic crisis. How does this affect the development of new MV models such as the single-cylinder engine, the 675 three-cylinder engine and the successor to the F4?
! Development is the engine of growth for motorcycle manufacturers. Certainly the current market situation makes the business more challenging than before, but one of the greatest advantages of being part of Harley-Davidson for MV is that Harley is not just any financial investor, but understands the importance of new products for business success. So product development remains the top priority, and this work is being driven on many different fronts. Much has been reported about future MVs, and the decisive reasons for buying the brand were the inventiveness and creative power of their development department. Harley, meanwhile, has long stuck to the practice of not saying a word about future products until they are ready for the market. MV has adopted this practice and will not talk about future plans, even if the related issues are derived from previous pronouncements.

? How many motorcycles will MV produce per year once the new models that have not been commented on are presented?
! We want to grow profitably. New products are just the beginning and production figures are only part of the strategy required for this. It is important to offer amazing products in a way that makes it easier for our customers to buy them and then enjoy good service afterwards. The value that the customer can derive from it must be higher than the costs, and many factors are decisive for this. We have to work on all of these factors.

? What plans does Harley have with MV in the USA?
! The US market offers great earning potential, but MV has so far only sold little there. There are many reasons for this, and all of them are gradually being eliminated. When we do that, everyone will be happy: customers, dealers and the company.

? What would you think if Harley and MV shared the same distribution system??
! In general, we don’t see a lot of overlap with customers of both brands and not many dealerships who can represent Harley and MV equally well. That’s even one of the reasons why buying MV makes sense: We can attract new customers who may not be interested in a Harley at all. When it comes to creating value for customers, the retailer plays a major role; he has to stand for his brand with everything he has. For the sake of some nice synergies, we will not accept any compromises.

? What other synergetic effects could arise from purchasing MV??
! There are many opportunities for Harley and MV to benefit from each other, but our goal is to only use those that benefit the customer.

? What will happen to Cagiva? It was rumored that a successor to the Elefant with the Rotax engine of the Buell 1125 was being developed. Particularly bold speculations even speak of a Cagiva athlete.
! Cagiva is a proud brand; we are examining many ways to build on their tradition.

? There were rumors that Massimo Tamburini left the CRC (Cagiva Research Center, editor’s note) and thus MV because he did not want to work on Buell motorcycles and did not want to accept deadlines for his developments. What were the reasons for his resignation??
! It was Mr Tamburini who made that decision, and I respect it. Such decisions are often difficult for outsiders to understand; it is not my turn to speculate about it. During his unique career, he has had a tremendous impact on the motorcycle industry. I am particularly impressed by the spirit he has left with his employees and the skills he has developed at the CRC.

? Who will lead the CRC in the future??
! The employees and skills of the CRC are so firmly established that we are confident that we will be able to continue the tradition of outstanding products. In a way, that tradition itself will be the future direction.

? Where will decisions be made about the design of future MVs? In Varese or Milwaukee?
! MV will continue the tradition of making great Italian motorcycles.

? In the past there have been problems with the reliability of the MV motors ?? MOTORRAD had two serious engine failures during tests. What has been done to solve these problems and to improve the reliability of MV motorcycles in general??
! First-class quality and reliability make a motorcycle extremely valuable in the eyes of a customer. MV Agusta will always pay special attention to this.

? MV in the Superbike World Championship? for you a dream or a realistic future perspective?
! We have big plans for this company. And great expectations of them.