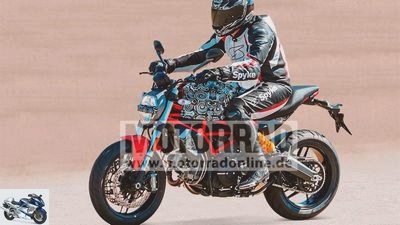 Ducati prototypes. Ducati is rediscovering the middle class. And the air-cooled twin. And the everyday athlete for the street. If that’s not good news.

Of course, nothing is official yet.

Can’t be right before the autumn trade fairs in Cologne and Milan. You act mysteriously, you don’t want to desecrate the great moment of the presentation. Unofficially, however, it is slowly becoming clear where the focus of the model policy for 2017 is located in Bologna. In the middle of us, namely, with the normal motorcyclists. And a little in the good old days too.

“More than red” – that is the motto that Ducati has with the Scrambler Breathed life into it. Or with the XDiavel. And now with the return to the basic monster and the athlete for everyday life. The brand should – and must – position itself more broadly, away from competitive sports and eternal competition. VW boss Muller recently warned that. He will be delighted with what MOTORRAD recently drove slightly camouflaged in front of the lens.

Because it has nothing to do with performance or high-tech excesses when Bologna unpacks the old air-cooled monster drive again for a large scrambler. But that’s what connoisseurs of the brand expected anyway. What is more surprising is that the Reds are obviously also dedicated to the lower end of the Monster series and will in future combine the small 803 cubic centimeter engine of the Scrambler with a completely new frame. However, if you take a look at the model and price lists of Ducati throws, realizes how much it was needed. With the exception of the Scrambler, entry into the Ducati world is not possible below around 11,000 euros, while motorcycles well above 15,000 euros are more the rule than the exception. In detail – and as far as the analysis of the Erlkonig images allows: For the new base monster, Bologna does not use the framework of those who died much too early in 2014 Monster 796 but constructed a much simpler tubular space frame. The scrambler apparently contributes the motor and swing arm, but it is noticeable that the new little monster has an oil cooler that is not available on the scrambler. One possible explanation: a more stable temperature balance thanks to the oil cooler is necessary for Euro 4 homologation and will probably also grace the next Scrambler year. You can also be pretty sure about the technical data. The 75 hp of the scrambler motor will probably not stop in the new Monster environment – the Monster 796 had 87 hp with this engine – but the curb weight should be well below 200 kilograms. That leaves the question of the price. Around 9,000 euros, maybe a little more: That would be a perspective for future Ducatisti.

Whether they were next to each other on the shelf, the small and the large air-cooled V2? The big 1100 with 100 hp was probably further behind, because it disappeared from the Ducati range at the end of 2013. Whatever: It’s back now, too, as part of Heritage and Modern Classics. And because nowadays you can’t make a state with 1100 cubic meters and around 100 hp (especially against the air-cooled boxer from BMW), rumors have it that they have even given the gifted character actor an increase in displacement in Bologna. With 1200 cubic centimeters he should now work in the large scrambler. That should be enough for a full blow in all speed ranges, but must initially remain a bit of speculation

On the other hand, despite the poor quality of the only Erlkonig photo, the Scrambler is certain: like its little sister, there will be an Urban Enduro version with the front fender perched high above the front wheel. It also seems certain that Ducati is taking over the frame, swing arm and probably also the suspension elements from the 800 scrambler in line with a clever modular strategy. Unfortunately, the photo does not allow any reliable conclusions to be drawn about what the brakes look like. A second brake disc seemed appropriate in view of the around a quarter increase in performance.

The third would remain in the Erlkonig-Bund, and she too is basically one thing above all else, namely down-to-earth. At least, as far as one can say of a sports motorcycle with a thickness of over 900 cubic centimeters. And as long as you make the current Panigale model range the benchmark. It only starts at 158 ​​hp and 16,390 euros for the “small” Panigale 959 and ends with the Panigale R in the super sports Olympus – at around 200 hp and 32,990 euros. So there is still a lot of air down – and in the case of the new 939 SS this is paired with the realization that not everyone who finds a crisp sports motorcycle attractive will want to romp around on the circuits of this world under low pressure and hopelessly overwhelmed.

So Ducati is now finally doing what others are not doing, namely to offer an affordable athlete with an everyday attitude. The new sport-is-not-murder-twin was already in the pits at the World Ducati Week (see MOTORRAD 16/2016), now it is doing its final test laps. The first Erlkonig pictures show that people in Bologna take popular sport seriously. The low-lying front section with Panigale appeal is joined by unusually high-positioned handlebar halves above the fork bridge, which do not force the driver into a humble position. Together with the footrests at a tolerable height and a somewhat lush seat upholstery, this should result in a tolerable seating position with a good overview of the game, even in urban areas, as a Panigale will never deliver.

Except for the front section, the new athlete has surprisingly little of that. Frame from the Monster, engine (with numerous changes) from the 939 Hypermotard, around 120 hp – here, too, Bologna cleverly uses the modular principle to create something new. In this case a sports motorcycle for the road for those who have had enough of hyper-supersport. And also for everyone who can no longer see the jagged naked bikes with a brutal 160 hp and more.

Ducati not only breathes new life into the air-cooled engines, but also continues to develop the current Monster range.

It’s a shame that the wall covers the lower part of this monster variant. Otherwise you could see more clearly that the new sportswoman not only uses the frame, but also the swing arm of the big monster. The obvious innovation on this “touring monster” is the plexiglass pane to reduce wind pressure. It remains to be seen whether this will be used to create your own model or just test factory accessories. In any case, this monster is more suitable for everyday use than her sisters.