1971: French bikers discover the Kawasaki 750 H2. An astonishing rocket that is as elegant as it is aggressive. Since then, its aura has remained intact and its exhausts escape the aroma of two-stroke and the scent of all legends …. 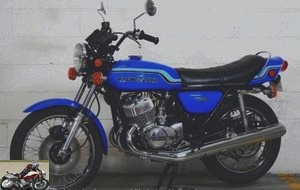 A beauty. Superb, in its blue livery enhanced with two triple threads stylizing its future trajectories. This hellish look, already inaugurated a year earlier by its little sister, 350 S2, really takes on its full dimension and refines its proportions, more balanced and even better distributed on the 750. 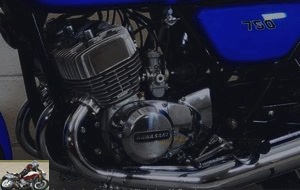 Its engine, with regular and generous fins, is tilted forward as if to symbolize the dynamics for which it was designed (and incidentally, better cooling …). Even the typography adorning the tank and the side covers, also inclined. The decoration, running from the front of the tank to the rear end, further lengthens the silhouette of the machine. And the S-shape of these nets gives the impression of movement …. 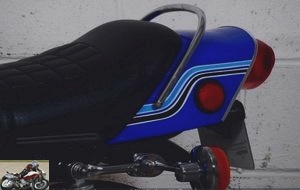 The tested bike has a large handlebars, between upright torso and good positioning of the footrests, the rider immediately feels "at home". The saddle is comfortable and the original steering damper does not hinder the movements of the bar. 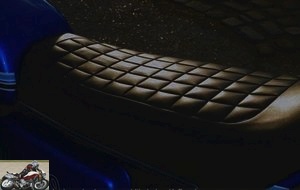 The H2 does not have an electric starter, but snorts really easily. You must first fold up the right footrest, otherwise the footrest will stop the kickstarter in the middle of the race. When cold, it is necessary to press the throttle lever and provide a light boost in order to keep the engine running. The hock then just has to be let down. The windmill comes alive and tears the air with a sound that will always surprise those who have never heard a big two-stroke start. Then, time to slow down again, it is a deep snoring interspersed with a succession of saucepan noises that acoustically illustrates what some theorists have called (on their drawing board!), The ideal balance. Slow motion is far from convincing! In use, the three-cylinder reaches its operating temperature very quickly. 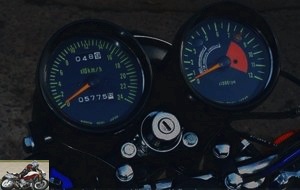 The first report commits…. To the top ! All gears are engaged in this way. If you want to find the neutral point, it is at the very bottom. This detail will have to be kept in mind when setting off again at the green light, otherwise, we will hear the engine take its turns while remaining in place and in neutral! It may seem curious that this is the case on the largest of the three Kawa legs, presented in 72. Indeed, if the 500 H1 Mach III appeared first, had the same selection arrangement, the 350 S2 of 1971 already had a grid to the new standard: first at the bottom and the others above. Okay, so we have to "do with". Once this little detail is well anchored, all is well.

As soon as you get into the gear, you should give a little gas to take off the machine and allow it to take off. The engine is lively and without being completely free of torque (given its large unit displacement), it will however prefer, like its younger brothers of smaller displacement, a sharp rotation of the handle to feed it quickly. And concerning the music, what a symphony! An unsightly cacophony of slow motion to the whistling of a turbine …. 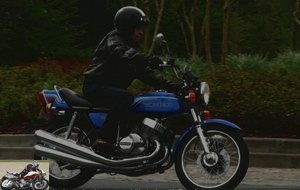 In city traffic, the use of intermediate speeds on a trickle of gas is not the most "comfortable", the engine really only asking to take revs…. In such a case, the 750 H2 becomes the fastest rubber band from one red light to the next! Even if, contrary to popular belief, it does very well in the city (if the handlebars are raised, with bracelets, that’s another story!), The ride on the road and more particularly on the secondary network, s proves to be his favorite field and provides the greatest pleasure …. 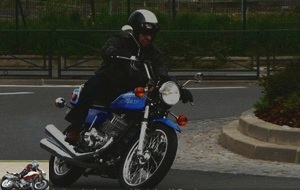 The H2 will most often be driven from one acceleration to the next. A line to pass? A right handle rotation and you’re done. In turns, the pots can scrape. During the H2’s sporting career, in criterium 750, the drivers then hammered the exhausts to gain ground clearance. The most intrepid will know how to push it to its limits, as it is cut out for the fight. ….

Hop !, you only have to turn the handle and you can feel the engine "go wild", as if it were stamping for a brief moment before launching into a shrill revving pushing it irresistibly forward and…. the following report. Distrust, we quickly find ourselves in the rear wheel without doing it on purpose! Even in fifth, it is still possible to set off quite quickly without having to downshift. On the other hand, if you want to get out of traffic more quickly, using a lower gear will put the engine back into a rev range allowing it excellent ability to jump instantly.. 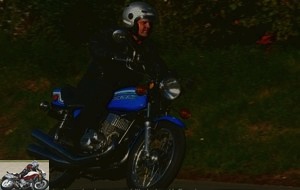 The 750 H2 finally shows impressive breath, but also real goodwill. Especially since its handling, with today’s tires, remains healthy if the surface is not damaged too much…. And even if that’s not what it does best, it can handle a reasonable speed, as long as you can forget the real pleasure that comes with every upshift ….

The lack of fairings and vibrations do not bother the rider much, as he has to stop to refuel every 100 kilometers. Yep, the H2’s ogre appetite doesn’t make it a queen of range, and the 17-liter fuel tank is quickly swallowed up at a brisk pace. However, from pump to pump, the big curves swallow up without too much ripple in the rump and at the legal pace its motorway behavior is akin to that of much more modern machines. Equipped with the large handlebars, the position remains uncomfortable at high speed and obviously, the Kawa clearly prefers to shake it on the roads than on the pay tapes …. 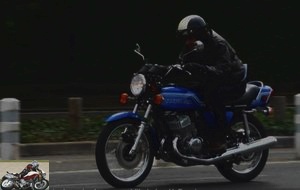 The passenger will be happy to be able to cling to a grab bar, which is very useful especially if the pilot abruptly throws his missile. The saddle is wide and comfortable. The vibrations quickly become unpleasant…. For a short ride, being in the back of a 750 H2 is a great pleasure. On the other hand, undertaking a long journey will require a deserving self-sacrifice on the part of the transported person ….

As for braking, the single front disc pinched with a single piston and the rear drum do what they can to quell such fury. The only point (of importance!), Remembering that this bike has more than…. forty years ! 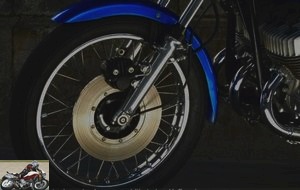 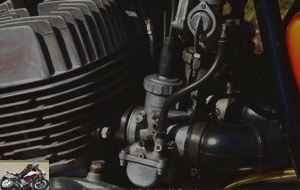 The machine tested, completely rebuilt down to the bolt, turns relatively little, but goes out regularly for rides. Its maintenance is limited to monitoring the levels (separate lubricating oil and gearbox level between two oil changes, sufficient every 5,000 kilometers approximately). The chain tension (with O-rings, which advantageously increases the duration) and the lubrication of the cables being provided regularly, the motorcycle does not claim anything more for the moment! In any case, many newer motorcycles require more frequent and more expensive maintenance than that of an H2 whose reputation for reliability has not been usurped.. 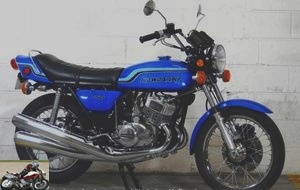 At the end of 1971, French bikers discovered the Kawasaki 750 H2 Mach IV, a sports car as beautiful as it was efficient. If the H2 remains the most desired and above all the best known to the general public, it is above all because it is the biggest and also the last motorcycle with a 2-stroke engine and alone symbolizes the fury of the saga of " three-cylinder Kawa ”. It ended its career in 1975 after having been distributed in 47,500 copies distributed around the world..

1972: version H2
The first vintage delivered from January 1972 in blue (but also in old gold, from April) develops 74 horsepower at 6,800 rpm and maximum torque of 7.9 m.kg at 6,500 rpm. She weighs around 210 kg when fully loaded. The lubrication is separate and the ignition electronic. The capacity of the fuel tank is 17 liters and 2 liters for the oil tank. Its top speed is given for 200 km / h. 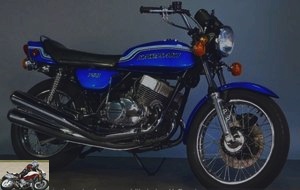 1973: H2A version
On the following model, distributed in old gold color in our latitudes from May 1973, no noticeable modification, except for the decoration, the lines and borders of which become rectilinear and henceforth underline the Kawasaki typography of the tank.. 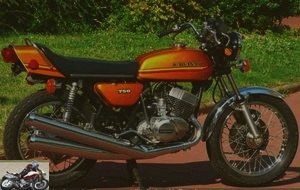 1974: H2B version
The 1974 model resolutely changes dress and look. The shape and decoration of the tanks, side covers and seat backsplash are redesigned. From now on, the 750 H2 looks a lot like the 500. Its engine is mounted smoothly in the frame and the swingarm is extended by five centimeters in order to limit the load shedding of the front wheel during acceleration. The caster angle is reduced to increase the handling of the bike. If the power is reduced by three small horses, it is to the benefit of a more homogeneous behavior, more flow and ultimately more easily usable. The 750 H2B remains as efficient and undoubtedly more comfortable than the previous versions. 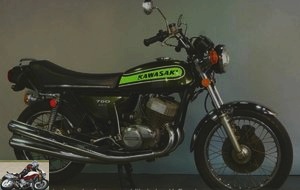 1975: H2C version
The last version of the 750 H2 will not be imported to us, because the emission standards, the "waste hunting" and other symptoms very popular in this period will have the effect of the last big two-strokes. In addition, the 900 Z1 and its superb four-cylinder, four-stroke, twin-shaft block has attracted more and more fans to its cause. The H2Cs that we will be lucky enough to come across come mostly from the United States. Their colors and decoration evolve and their swinging arm is extended again. The steering damper changes sides. Exhausts and footrests are fitted with silentblocs to better filter the sometimes destructive vibrations. 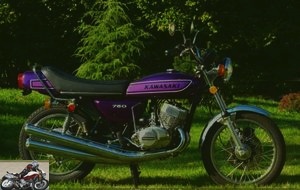 In 1972, the 750 H2 was priced at 11,200 F (or € 1,707), but this figure must be weighted with the purchasing power of the moment. In 1972, the minimum wage was € 675.98 gross per month. Today, to acquire a Kawa H2 restored in its entirety or in original condition (rather rare), you will have to pay no less than 10 to 15,000 euros. An astronomical price that takes into account the quality of the restoration and the parts replaced. Strictly original models and in perfect condition can approach 20,000 euros. 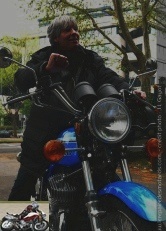 To find an H2, two possibilities are available to you. For a good sum, you can acquire a restored machine, taking care to check the quality of the work and the provenance of the parts used. The passion of the owner and the supported invoices are always good clues. Take the time to test the bike well in order to track down the slightest suspicious noise and to check that all the components are working properly..

Alternatively you can undertake a restoration from a full motorcycle if you are lucky enough to find one. In this case, given the rarity and cost of parts, it is better to start with a complete and original model. The 750 H2s were often modified and abused in their early days.

Aside from conventional maintenance like any other motorcycle, the Mach IV requires special care and monitoring of a few items, such as the steering column bearings or the swingarm bushings. The gearbox and clutch were unreliable at the time, as were the crankshaft seals. To be able to fully exploit the engine of the Kawa 750 H2, the carburetion must be adjusted perfectly and regularly according to the gasoline used.

Between its magical beauty and its scent of history, the Kawasaki 750 H2 Mach IV undoubtedly has its place for eternity in the large parking lot of the Motorcycle Hall of Fame !