We have been waiting for several years for a basic to replace
the ER-5. In the renewal of its range and in particular roadsters, Kawasaki
unveils the ER-6 in 2005 … a bomb in the universe
of the bike for beginners. The ER-6 is a twin cylinder, like
the ER-5, but the comparison stops there: 650
cm3, electronic injection, catalyst, 72 horsepower for only
174 kilos (197 kilos fully loaded), radial brakes… 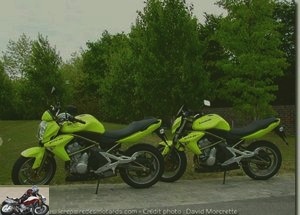 The ER-6 flashes in its yellow livery, but it has
you don’t need that to get noticed. We can look for inspiration
from another model, its creator – Shunji Tanaka –
has designed it like no other: a phenomenon
remarkable in the mid-range niche, generally
angry with the design. Beyond the color, we immediately notice
the triple vertical frontal optics, the imposing radiator cover, the
shoe, the almost horizontal inclined shock absorber and a pot
Invisible "catalytic", with its outlet under the engine.
At the rear, the indicators are reminiscent of antennas. 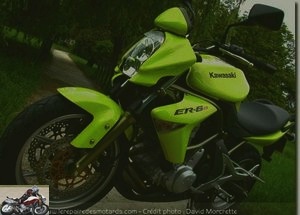 The position is more compact than traditionally, despite
a natural position. The narrow, close-knit handlebars help
still have that impression. Both feet touch perfectly
on the ground for the 1.70 m pilot, thanks to a saddle
low and relatively narrow. It even appears affordable
for templates of 1.60m without any problem, closer to
this look of the ER-5 than of a Z750.

The dashboard gives pride of place to the tachometer, traditional,
while the speed is almost hidden in a digital speedometer.
We appreciate the warning.

The rectangular mirrors are easily adjusted but
especially allow to see the elbows despite their size. 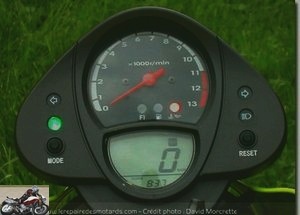 Reset. The pot distills a discreet sound, raucous limit.
This sound gets higher after a few thousand kilometers.

Clutch, start … The very narrow reservoir
really ask to hug the knees, almost closer to a
bike than a motorcycle. Pilot and machine balance
is centered, not overloading neither the front nor the rear.
The whole thing is again akin to a bicycle with
extraordinary low-speed maneuverability. The U-turn
is done effortlessly and in a pocket square. We feel on the other hand
immediately the twin, almost brutal if we do not remember
sufficiently clutch. That said, it remains particularly
flexible and resumes smoothly from 2,000 rpm 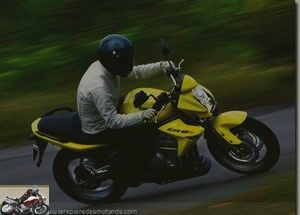 In town, the flexible engine, with a torque very present from
the 5,000 rpm, allows you to run smoothly, from 2,000
rpm. The box is so nice that it encourages
change gears, to wind quietly in 4th gear. And yet,
it could stay in 2nd, because the ER-6 accepts to climb in the towers
with disconcerting ease and glee,
climbing without complaining to 10,000 rpm on this report. And at
10,000 rpm, the ER-6 is at 110 km / h, well above the authorizations. 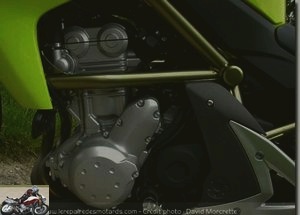 The shape of the front optic helps deflect the wind
up to about 140 km / h, offering the possibility of
go up to 150. Beyond that, and with the wind, it becomes
necessary to hang on more than vigorously. And yet,
at this speed, the ER-6 is only 7,000
rpm, or at 5,000 rpm from the red zone! On the other hand, its lightness
extraordinary at low speed becomes a handicap here – except in
duo – offering less wind resistance (than a Z 750 for
stay in the mark). Despite everything, the ER-6 turns out to be
sound in terms of behavior, offering flawless stability.

The ER-6 is found with delight on departmental.
By playing between 2nd and 3rd, she shows her playing skills, daring
virolos. Handy, it fits in curves without any particular effort,
particularly neutral in his reactions. The chassis
is particularly healthy. Its braking capacities are
then welcome to alternate wide curves and hairpin turns.
For those who would like to opt for the ride mode, it is able to
stay in 5th on these same roads, for a cruising speed
smoothly and smoothly. She doesn’t have to be
whip to give the best of herself between
5,000 and 8,000 rpm. Beyond that, it is better to pass a gear
to get sensations again, even if she likes it
to climb briskly in the towers.

With her couple at mid-range, she will develop further
more possibilities on mountain roads.

The long saddle gives an impression of comfort during the first
hundred kilometers. It turns out ultimately
much firmer than expected, hard limit, and does not allow
bridging a firm rear suspension. We then gain by making it more flexible
the rear shock absorber, especially on degraded pavement
where driving can turn into a rodeo for weights
feather. 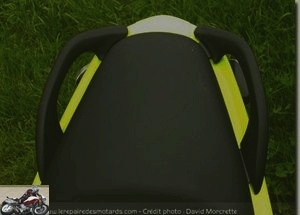 The low-placed footrests and the handles are
ideal for a good overall position of the passenger. The weight of the
passenger hardly lightens the front, confirming
stability and security of balance
overall motorcycle.

The rear brake turns out to be an honest retarder,
never blocking even by forcing. Front braking proves
progressive, with an excellent overall feeling, offering precision
and security. On heavy braking, the fork
before has a small tendency to dive, without ever
surprise. For those who would exploit it more
sporty, it may be interesting to harden the fork
before.

Aesthetes will notice in passing the "daisy" type discs. 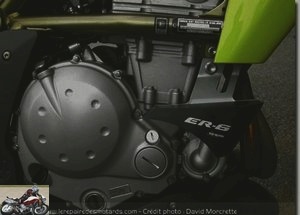 The ER-6 houses a space under the saddle, allowing a
U-lock without problem (Stark type during the test).
Note the presence of retractable hooks.
The crutch, a little placed at the back
asks to be looked at, to be unfolded.
But it folds up easily and offers good stability.

It will appreciate being equipped with crankcases
discreet, because the slightest fall when stationary is revealed
very expensive: more than 1,000 euros, in particular because
of the fairing. There are already several versions,
all equally aesthetic as each other, round or more
worked, for prices around 150 euros.

For heavy riders taking the highway, the windscreen will be essential
(available for 130 €).

It plays the economy at the maintenance level with revisions
planned only every 10,000 km. 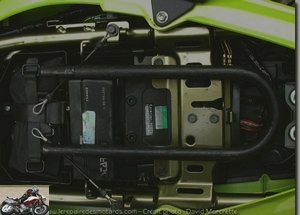 The ER-6 goes into reserve at 280 km in mixed driving
(city / highway), with an average consumption lower than
4.5l / 100. Its consumption can even drop below 4 liters when driving at a stabilized speed. It thus allows a range of more than 300 km – even 370 km – despite
a small 15.5l tank. Switching to automatic reserve
is indicated by a dual display: an indicator light
orange on the instrument panel as well as a flashing FUEL inscription. On the other hand, as soon as the Fuel inscription flashes, there is no longer any notion of mileage..

We regret the absence of a fuel gauge, but the double-trip
partial and camel autonomy make it possible to fill this gap. 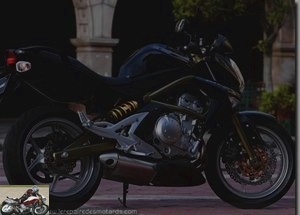 The ER-6 seems like a real beginner’s bike, but with
such potential, that it will also delight the biker at
looking for his second motorcycle. Even those used to sports
take pleasure in the handlebars and manage to stand up
to sports in virolos. The Kawa cut is symptomatic
of its capabilities. The genius of this model is there
: having succeeded in reconciling a pleasure motorbike, without
have created an uncontrollable bomb for the majority
bikers. On the contrary, the ER-6 is easily tamed
to be mastered by everyone, easily and quickly,
while offering a living engine and extensive possibilities.
And at € 5,999, if it is placed at the same level
of price than a Suzuki 600 Bandit or a Honda 600 CBF, it is much less
expensive than a Suzuki SV or a Yamaha Fazer. The ABS version appeared
this year is the icing on a model’s cake
well designed, for just € 500 more. All this explains
its excellent performance also in terms of sales; the
bikers are not mistaken and widely acclaim it.

User reactions and testimonials on the
testing forum.

User reactions and testimonials on the
motorcycle guide