The SM 690 is the natural evolution of the Supermoto and Duke 640,
presented at the show
of Cologne 2006, with the injection and a gain of 30 cm3 to pass
euro3 standards (catalysts in pots), all in its LC4 unit.
The whole develops 64 horsepower at 7,500 rpm, which is very
close to the red zone. The technical sheet sets the tone and color
: you will probably have to whip the beast to get all of them
horses… 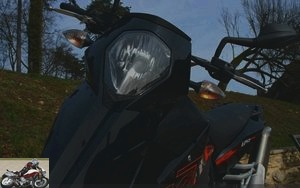 KTM tradition respected, the 690 SM reveals itself and stands out
immediately in its orange and black livery. But even
forgetting the color, the 690 SM is distinguished by its long beak, its long
enduro-style saddle and two huge exhausts
stainless steel raised at the back. Cut to
the billhook, the lines are diagonals and angles, simply joined together
by the unique curve formed by the saddle. Supermoto ride
in terms of tires, the motorcycle only appears higher. 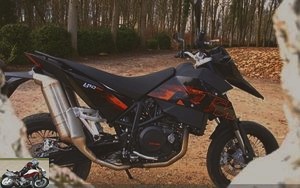 Contoured handles are an extension of the back
duck tail.

The counter reveals a traditional analog tachometer
with an orange zone at 8,000 rpm and a digital counter for
speed, oil temperature, totalizer, both trips
partials and the clock. The switch to reserve – automatic – is
indicated by an orange diode. 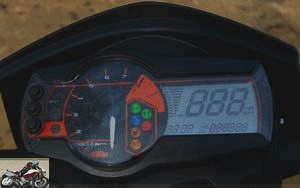 Side cycle part, we notice the aluminum swingarm
molded, open on the sides as well as a lattice frame
chromium-molybdenum. Aluminum is found in the frame buckle
back. This is what made it possible to offer a particularly
light with only 152 kilos (167 kilos fully loaded).

Up close, the finish is excellent 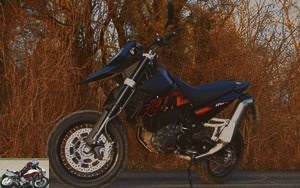 The SM 690 looked tall at first. At second glance, she is
even very high. Perched 875 mm from the ground, the
two feet do not touch the ground for the 1.70m pilot. On the other hand, she
is really light and the saddle is very thin. From
suddenly, even if only one foot can touch the ground, the pilot feels
in confidence and without any apprehension.

The handlebars are wide, the position is straight while bringing to
lean forward. The legs immediately embrace the
tank, with an ideal gap.

The "hexagonal" mirrors offer a field of vision
limited but sufficient. Mounted on bearings and held by
three cruciform screws, do not hesitate to give back
a blow of the screwdriver from time to time to keep them in position.

The kickstand folds up easily. The passage from one foot to the other
done easily and without even paying attention. 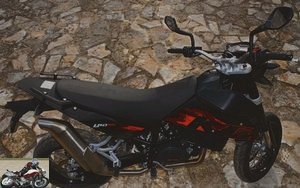 Despite the double exhaust, it is indeed a single cylinder
: a large mono of 653.7 cm3 developing a maximum torque of 65 nm
at 6550 rpm, which is just a little more than an MT-03 (if we can
dare to compare).

Do not hesitate to let the engine warm up for a few
minutes. A winter temperature, reinforced by the big
mono in town, and a deceleration can follow
from the first meters by a good setting for the pilot
not warned. 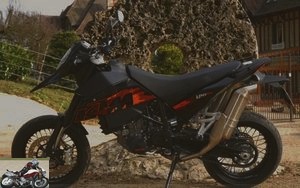 MS appears light when stationary. In
city, this lightness is only confirmed. The important
lever arm allows you to sneak anywhere effortlessly and with a diameter
super short turning circle (4.50 m). The big mono allows acceleration
virile that must be mastered so as not to wheelie on
the first reports in the dry. In the wet, the same
maneuver slides the back … the SM is very playful.
This is partly due also to the Michelin Power Race at
the back that you shouldn’t hesitate to let heat up.
Fortunately, all the reactions of the bike are smooth.
and in the end, it does not pose any problem of handling.

Handy, high saddle, the SM really allows you to fly over
traffic, with the gaze far above the cars. Sloping streets,
traffic, overhanging, nothing scares him despite his height.

On the other hand, it is really a very big mono, which does not support
no going under 3000 rpm, or even 3.200 rpm, without knocking
violently. Day by day, the third hits under 50 km / h,
forcing to play the clutch or especially stay in second,
what turns out to be the best speed in town.

However, the engine now equipped with a shaft
balance filters vibrations. it hits
low speed but it never vibrates … a world when
we knew the 640 models.

Fortunately, the box is soft and precise.
We will not hesitate to ask for it. 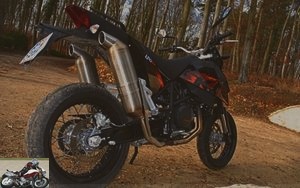 The SM 690 sets off on the motorway with force and violence … but
it already pulls on the arms from 120 km / h,
whereas it is only at 5,000 rpm on the last report. 1,000
rpm higher, it is at 6,000 rpm and only 150
km / h, unbearable speed for a long trip. We are very
far from the theoretical 200 km / h and totally useless in view of the model…
Sixth gear here is a real overdrive, very
long, which will never or never be used in normal use.
We could imagine having vibrations like on other big monos
but nothing here. We almost forget that it is a mono, in any case at
vibration level. 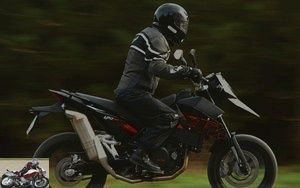 It is therefore with real pleasure that the 690 SM finds the departmental.
Soft under 4,000 rpm, it gives a good kick from
5200 rpm and pushes hard all the time then to almost calm down
compared to the approach to the orange zone and the 8000 rpm. We can then juggle
between 3rd and 4th and play to jump from one turn to another.

You can come home strong, trust the frame and swing it all. SM reacts
unsurprisingly with the only limits being those of the pilot. Front fork
WP offers exemplary behavior for an extremely
precise.

Despite the large travel, the 690 SM does not generate any
pump effect on rapid angle changes. In short, in the end, she
gives a lot of confidence. 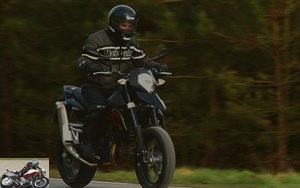 The 690 SM is more willing to take a tour on the national road than
on the highway. But she grazes on the last report to
90 km / h while it is only 4,000 rpm. In short, it is necessary here
forget the 6th, or even the 5th, to stay on the intermediate gears.
It is there that she makes the powder speak and that all the overruns
can be considered and show it to displacements
more important. 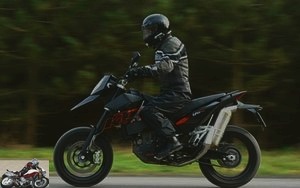 If the lighthouse offers just what is needed in the city, in full lighthouse, the SM
690 offers excellent vision. Its new, larger lighthouse brings
here a real plus.

The saddle is firm but not hard. It’s not really comfortable at
GT sense but the suspensions erase particularly well the
road irregularities. There is no racket stroke,
no hazardous behavior on deformed pavement.
We must salute here the performance of the White Power shock absorber with
progressive pro-lever system.

Contrary to what the model might suggest
with a priori, she accepts the duo very well. Handles
are well placed and the toe clips rather
low in comparison. The whole thing offers almost comfort on the road. Alone
the saddle height makes the ascent and descent a little more sporty.

Braking is really well cut for the bike, offering
a good feeling and no particular violence, nor at the back
nor at the front: efficiency signed by Brembo and
320 mm floating disc. Everything is easily dosed with efficiency
present, even with only two fingers in use
current. 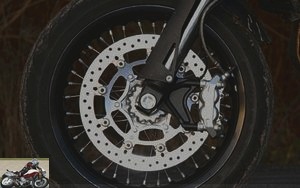 The saddle opens easily but leaves no room, unless
remove the tool kit. The U must therefore be aligned with a
tensioner on passenger handles.

There is no real luggage carrier, but the rear fender
used to secure a small bag. The tank does not allow to hang
anything.

The front fender is not used much. And even without
go off-road, the SM 690 gets smeared quickly and
take advantage to share with the pilot up to the helmet. 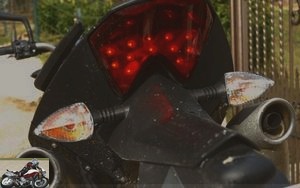 With its big torque and its taste for arson, the 690 is voracious of rear tires which cover between 2,500 and 3,500 kilometers maximum. Plan the budget accordingly.

The 690 SM is sober with an average consumption of 4.8 liters per hundred,
the reserve only appearing after 220 km in flexible use, but 180 km in arsouille mode, which it encourages to do.
A 3rd trip then starts and increases the kilometers traveled since the indicator light comes on.. 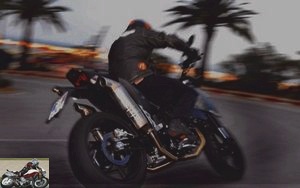 Lightweight, easy to handle but does not like sub-regimes,
the KTM is immediately loved for its engine, with a real
potato and attack provisions that other single cylinders do not provide
in the same displacement. The engine is a real surprise
and gives much more impressions and life than the card suggests
technical. Very healthy in terms of behavior, the SM 690 quickly puts
his pilot at ease and gives him the necessary confidence
to attack on small roads. It can even offer a real
room for a passenger for trips. We dream
to take her off the road to take her on the roads.

In short, the KTM SM 690 is a real personality, very far
traditional guns, which really has something to delight any biker at
the search for exception. Only its price at 8,295 € – 8,808 €
in its Prestige version – can make it look twice, in
being located more than 2,000 euros from a Yamaha 660
XT.