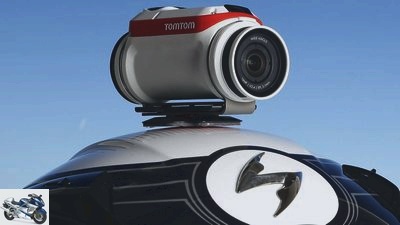 Motorcyclists who are on the road with a running action cam are increasingly being targeted by data protectionists. The use of mini cameras in road traffic is legally explosive. And ignorance does not protect against punishment.

It’s a sunny afternoon. MOTORRAD reader Gerald Amm from Ansbach is on the way out of town to gild the wonderful autumn day with a trip. Amm is surprised when a patrol car sits down in front of his BMW F 800 GT at a traffic light, and he is even more astonished when he takes note of the officials’ allegation. The stumbling block is the running Hero Cam, which he has mounted on the windshield of his machine. “At most five minutes of driving were recorded,” says Amm, who has a habit of recording his tours.

Use of action cams is usually illegal

That is not allowed, say the police, and there is a complaint for violating the data protection act. The 65-year-old is neither questioned nor seen what has been recorded so far. The Bavarian State Office for Data Protection Supervision (LDA) then investigates Gerald Amm “on suspicion of unauthorized collection and processing of personal data”. But already in November the accused received mail: “By way of a decision based on the best judgment,” the case was discontinued, it says. The motorcyclist believes in the “goodwill of the authorities”.

But Alexander Filip, responsible department head in the LDA, explains: “The proceedings were discontinued due to a lack of evidence.” There was nothing that could have proven the alleged violation and that would have withstood a judicial review – such as images or a corresponding statement. So Filip leaves it at that, to let the notice of employment end with the following note: “We point out that an unprompted monitoring of the traffic area represents a serious violation of data protection regulations, as there is a serious interference with the right of the road users concerned to informational self-determination . “Informational what please? The cumbersome term in the data protection jagon means nothing else than that every citizen has the right to move freely in public without having to fear being unintentionally and for no good reason being monitored by video.

Clear text: The use of action cams in traffic is usually illegal. Only if it is certain that the recordings are made for purely private purposes and do not leave the personal area, there are no concerns.

Important: Under what circumstances was the film filmed?

But where is the line between allowed and forbidden? The Baden-Wurttemberg data protection officer Jorg Klingbeil explains: “The unnoticed filming of road users on public roads is not compatible with German data protection law.” He also said this on behalf of his colleagues from other federal states, there is a consensus on this. And at the latest since a ruling by the Ansbach Administrative Court in 2014. In the specific case, this had ruled against self-appointed deputy sheriffs at the wheel, who let a camera run on the dashboard in order to blacken others for alleged traffic violations. Similar to the early retiree from Lower Saxony, known as “Knollchen-Horst”, who is said to have reported more than 50,000 motorists since 2006 in order to denounce them via video.

In the wake of this development, bikers are now increasingly being targeted by privacy advocates. In Hesse as in Bavaria, the first fines have already been imposed. The Bavarian State Office for Data Protection Supervision has also announced that it will take a closer look at video films that appear on the Internet or that are discovered during police checks. The decisive point is namely, despite the supposedly clear data protection legal situation, under which circumstances the recordings are made: Is it filmed non-stop while driving? Can other people be clearly recognized and vehicle registration numbers clearly identifiable? Or was the camera switched on specifically in order to record an expected accident or a serious traffic hazard? Lots of questions and gray areas. There are no quick answers, there is still a lot of work to be done by the courts, which have to decide accordingly and can thus establish clear guidelines.

Video recordings can turn into a boomerang

Even for the police, all of this is still new territory. “During controls, we secure the memory card of running action cameras if there is a suspicion of a traffic offense,” says Jan Zangenfeind, head of the motorcycle control group at the Upper Bavaria South Police Headquarters. Risky overtaking maneuvers, for example, which are recorded in the on-board camera, can become a boomerang for the amateur cameraman: the recordings can be used as evidence against him. “Depending on the situation, we then hand the material over to the public prosecutor’s office to check whether data protection regulations have been violated in addition to the traffic rules,” says Zangenfeind.

And that can be expensive. An average of 300 euros was fined for the 25 or so legal fines in Bavaria for data protection violations. It gets really tricky when action cam recordings are published on the net without anything to me or nothing to you, without the filmed people having given their okay.

But what if a video-documented incident could help convict a traffic hooligan? The previous jurisprudence has been inconsistent: some courts say yes to the usability of such recordings in criminal or civil proceedings, others no. There is also a need for clarification here.

We hear from motorcyclists that they are facing a fine for filming while driving. Is that actually forbidden??

Recordings with action cams or dash cams that record other people or vehicle registration numbers for no good reason – and this should not be used exclusively for private purposes – are not permitted under data protection law. Anyone who makes such video recordings to post them on the Internet or to pass them on to the police or an insurance company after an accident is violating data protection.

What is allowed and what is illegal?

The assessment should depend on what something is recorded and for what purpose. Recordings that do not show people or vehicle registration numbers, i.e. do not contain any personal data, are not subject to data protection law and are therefore unproblematic. The situation is different with videos that contain personal data and that should not be made for private household use, but should also be published. As a rule, they are not permitted due to data protection.

How can motorcyclists relieve themselves when such a violation of data protection is in the room?

You can relieve yourself, for example, by providing the data protection authority with the material to show that no other people have been admitted.

There are many videos online that show tours in great landscapes or exciting driving scenes. The filmmakers have one foot in jail?

If the videos really only show the landscape or driving style, data protection law does not apply. In no case should it be possible to recognize other people or be identifiable on the basis of the vehicle registration number.

What if a motorcyclist accidentally recorded an accident and this can then help to clarify the situation?

In such cases, in case of doubt, the courts dealing with the accident will decide whether recordings made possibly inadmissible under data protection law can still be used as evidence in criminal or compensation proceedings for overriding reasons.