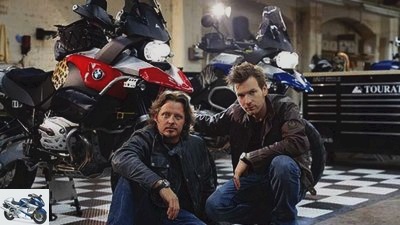 Long Way Down: After Long Way Round it goes on

After Long Way Round we continue
Success is addicting

After the great success of their filmed world tour »Long Way Round«, Ewan McGregor and Charley Boorman start their second film project. “Long Way Down” will take the actors through Africa. MOTORRAD met Boorman for a conversation.

No question about it, the man has a good laugh. Since the film project »Long Way Round«, the until then rather well-known British actor Charley Boorman, 41, has advanced to become a star of the global motorcycle scene – and not only: The lavishly produced TV series, which he and Hollywood star Ewan McGregor ( Star Wars, Trainspotting, Moulin Rouge) shot on two BMW R 1150 GS Adventure on two BMW R 1150 GS Adventure during a three-month trip around the world in 2004, also fascinates viewers who until then had nothing to do with motorcycles. There is no other explanation for the flick’s huge success. A positive side effect of the fame: “I can finally make a living from my passion for motorcycles,” says the likeable Boorman.

His smile reveals British understatement. “Long Way Round” was shown as a TV series in over 40 countries, the English book edition has so far sold over 1.3 million copies, and the DVD has sold around 900,000 copies. “We would never have believed that a motorcycle travel film could attract so much attention around the world.” But because that is the case, part two follows in the tried and tested filmmaking manner: Boorman and McGregor are now on a three-month trip from Scotland to under a very similar title Breaking up South Africa.

On-site meeting in southern Germany. Charley Boorman rummages through the halls of the motorcycle travel specialist Touratech, who was one of the numerous sponsors for the first film and this time again provides equipment for the three BMW R 1200 GS Adventure as well as camping items for the eight-person team. “We’re working with the same crew again as we were three years ago,” Long Way Round “has us firmly
welded together, every new one would be there like a foreign body. «In concrete terms:
The Swiss cameraman Claudio von Planta will be the two stars on the
Accompany the third GS, the rest follows as usual in two off-road vehicles at an appropriate distance.

So everything is the same? Not quite. This time it’s on the company
significantly higher pressure to succeed. BBC, the UK’s main television broadcaster, has acquired the rights to the first broadcast of “Long Way Down”. As early as autumn, the trip as a series should flicker on the screens at prime time, and the DVD must be ready at the same time. “Nothing can go wrong.” In order not to unnecessarily burden the team’s work, the exact departure date and the exact 25,000-kilometer route through Libya, Sudan, Ethiopia, Uganda, Rwanda, Tanzania, Botswana, Namibia and South Africa were designed like this As secret as the recipe from Coca-Cola: “We had countless inquiries from fans and the media whether they could meet us in Africa or even come with us.” Project was on the verge of collapse at times.

Would Charley Boorman, who privately prefer to iron on his brand new Ducati 1098 on race tracks, sit on a motorcycle on his own without accompanying cameras and travel through Africa in peace? “Rather not. I’m first and foremost an actor and I couldn’t drive off without making a film on the side. ”With a grin, he adds that the thought of the service vehicle in the rearview mirror is also very reassuring. However, he doesn’t let the mighty adventure come up. »Exactly the right motorcycle for such a trip. Strong and comfortable, so perfect for unwinding long distances. «Boorman is not worried that the long-haul cow is ultimately too heavy for a trip to Africa:» Only a maximum of five to ten percent of the route leads through more demanding terrain – we can do that with the 1200er too. ”

Much more stress than unpaved roads or deep river crossings (certainly the most exciting scenes in “Long Way Round”) is likely to be caused by the climate this time: Boorman and McGregor cross Africa in the middle of summer – experienced travelers probably just shake their heads about it. The actor, on the other hand, sees it calmly: “In Siberia we froze off our bums, now it’s getting hot.” At least partially, Charley Boorman knows what to expect on the Black Continent: Last year, the sports fan was in for an elaborate film project The saddle of a heavily modified BMW F 650 GS started in the Dakar rally, but it had changed during the fifth stage
Both hands broken in a fall, but still achieved the goal (www.racetodakar.com): »Unlike in lonely Siberia or in the deserted one
Mongolia we will meet many more people on our tour on the roads through the Black Continent. There is a great attraction in that. “

Further information about this exciting project can be found on the Internet at www. longwaydown.com.

A motorcycle travel film about the best
Broadcasting time on ARD or ZDF ?? imaginable?
Excluded! Motorcycle issues, unfortunately, target a very, very small one
Fringe group. Something like that brings in Germany
no quota, probably not even if
a local actor from the first division would sit in the saddle.
Why does such a film work abroad?
In the English-speaking world, people are generally more open-minded and enthusiastic about such topics, although motorcyclists are only a marginal group there. The English TV program
is just a lot looser than ours, and so are the viewers, obviously.
How important is that anyway
Celebrity status?
Enormous. The worldwide notoriety of an Ewan McGregor is in principle
like a guarantee for success. The first film
Wouldn’t have achieved such a quota without him. And I doubt whether the BBC would be on board without such a draft horse.
Motorcyclists in this country must therefore continue to wait for a corresponding TV format?
The big broadcasters set
on the subject of »Travel and Adventure«
certainly still on the classic country documentation in the style of Gerd Ruge or Klaus Bednarz. The motorcycle sector takes place exclusively in special interest channels such as n-tv,
DSF or DMAX instead.