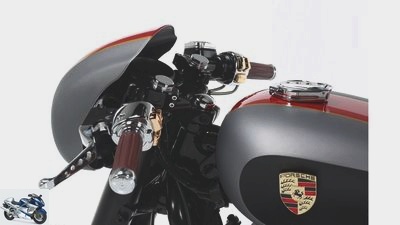 1/7
Actually, this Sportster was supposed to be something completely different and definitely not runner-up in the AMD Custom Championship. 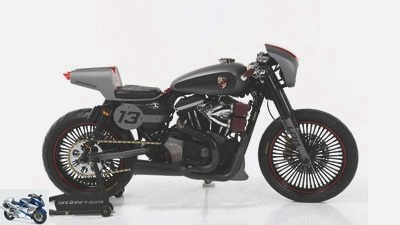 2/7
But the cancer of a friend sets the course again. 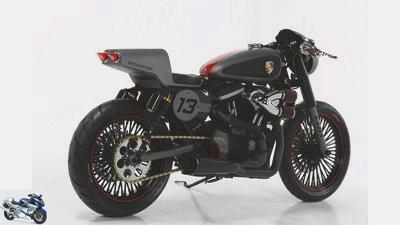 3/7
In the absence of his own, finished custom bike, Lord Drake Kustoms fundamentally rebuilds a customer’s Sportster. 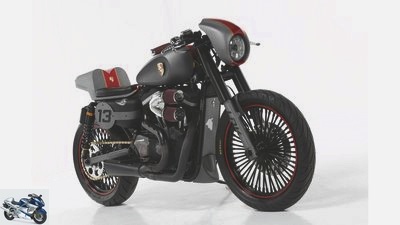 4/7
In the end, it will be the topic of the Porsche Speedster and it will lead to the title of runner-up world champion 2018. 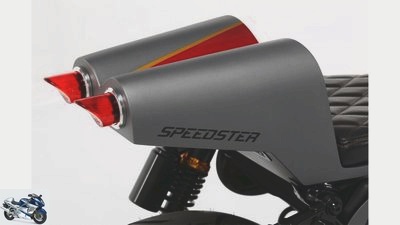 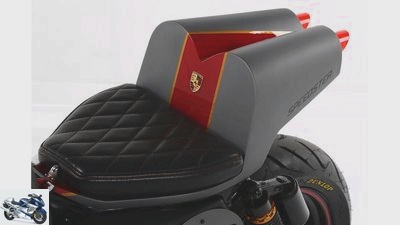 6/7
… and a Porsche emblem adorns the matt paint. 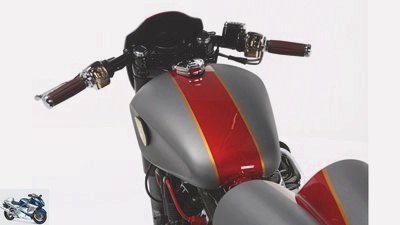 7/7
The tank is also a do-it-yourself, the handles are turned, the fork for mounting the stub is pushed through.

The story of Lord Drake Kustoms’ Harley-Davidson 883 R Speedster begins with a failure and ends with a trophy at the world championship of custom bikes.

As is so often the case, this story of a custom bike begins with a change of plan. Originally, Fran Manen from Lord Drake Kustoms (LDK) wanted to take part in the AMD World Championship of Custom Bikes in Germany in October 2018. In July, however, it became clear in his workshop in Malaga: it won’t work. The planned renovation will not be finished.

Friendship is thicker than oil

Shortly after the decision not to go to the World Cup, Fran phoned a friend who was also unable to attend. He has cancer. Fran agrees to bring his friend’s renovation to Germany, but also wants to exhibit himself. The question of the right bike to go with it is answered by a look at your own workshop: Harley always works.

Fran has one at this point Sportster 883 R from 2007 for a customer under construction and gets their permission to completely change the actual plans. It remains a cafe racer, but gets a completely different finish, new details and of course: a completely new theme. As a tribute to the Porsche Speedster racers and LeMan cars of decades past, the rear, the cockpit and the design of the paintwork have been re-tuned. The handles are turned from wood as a reminder of the steering wheels of the old days, the tank and rear are adorned with Porsche emblems, the matt gray paint with a red central stripe represents the almost bare bodies of this era. The reward for the effort and the karma for the good deed: The Speedster becomes runner-up in the class of converted Harleys.

Well advised with a used 883

The basis for the Speedster Sportster from Lord Drake Kustom is one Harley-Davidson Sportster 883 R from 2007. The V2 remains mechanically untouched, an open air filter and the complete system from Vance & Hines should have a couple of extra horses trot in addition to the 53 in the series. The original cast rims of the R-Sporty are exchanged for thick-spoke wheels. The original swing arm supports Lord Drake with new struts on the shortened rear frame. The tank and the distinctive rear section are made from sheet metal. Modern LED lighting is used all around, which are operated by newly chrome-plated fittings with golden switches. The standard fork is pushed much further through the fork bridge to make room for the straight handlebar stubs. It also shortens the trail, although this advantage is more than offset by the heavy rims.

Entry into the Harley world

Lord Drake Kustoms’ Speedster lives from the story behind it. Actually not planned to be exhibited, then converted into a world championship as part of a friendship service in the fight against cancer. Salary: Vice World Champion 2018.