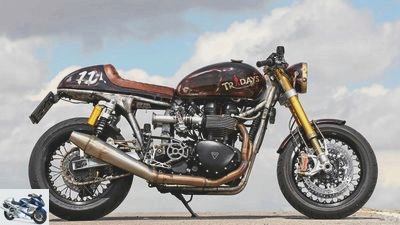 “My God, what a trivialist lets such a beautiful Bonneville go to waste?”, it shoots through your head while looking at this LSL triumph Bonneville. And in the next moment the fingertips, which were just about to stroke the rust-scarred frame with pity, twitch back. Instead of pockmarked metal, they slide over immaculately smooth paintwork.

All the patina, the rust, the scratches, everything painted on and carefully preserved under several layers of clear varnish. The apparently worn decorative lines on the tank: hand-lined. Lack-Fex Michael Schonen from Lackmuss (www.lackmuss.com) was allowed to let off steam to his heart’s content here.

And Bonneville, who was apparently graying in honor? On closer inspection, it turns out to be the current iron. This gem was conceived and devised by Uli Bree, screenwriter and organizer of the annual Triumph mega-break Tridays. “Do everything that can be done once,” was his vision. As a willing accomplice and vicarious agent in this nefarious act, LSL boss Jochen Schmitz-Linkweiler stood by his side. He took over the entire chassis modifications. From the mighty triple clamps (which are also available with parts certificate for the series fork) that hold the Ohlins fork of a Kawasaki ZX-10R and, thanks to the larger offset, shorten the caster to 92 mm, to the Junginger swing arm, in which a 5 , 5 inch Kineo wheel is stuck. Classic meets modern. This is already signaled by the tiny digital Motogadget cockpit full of information and the contactless ignition lock under the handmade tank. By the way, the emergency stop switch is under the seat.

After more than 300 hours of work, the result was a flawless cafe racer who knocks the viewer’s socks off. No more and no less. On the one hand, of course, because of the paintwork mentioned above. On the other hand, because of the technical delicacies that it unveils on display. But more on that later. Because the best thing about this iron: It drives very well.

It starts with the seating position: sporty, as it should be for a cafe racer, but still relaxed because the rests and handlebars sit where hands and feet expect them to be. And because the seat cushion, which is covered in cognac-colored calfskin, is not too thin. The Tridays can be flipped very easily in an inclined position. You really don’t trust her to do that in view of the chunk of the engine and her stately appearance. She has lost over 25 kilograms and weighs just 201 kg with a full tank. In addition, the steering angle is steeper, the caster significantly shorter, which gives wings. The spring elements – at the rear specially made TTX stereo struts from Ohlins from the ATV shelf – act honestly, tightly, without ugly hardness. The Tridays swings almost nimbly from curve to curve, wonderful. And angling until the gear lever and brake lever gently chisel on the asphalt. Modern athletes like to scratch with the pegs later or not at all and to spurt out of the curve more precisely. But they hardly let their pilots taste the curve as intensely and unfiltered as the Tridays.

Usually when cornering robbers are tested, formulations of boring straights that interrupt the fun on bends come up at this point. But in the case of Tridays, the straights also have a very high entertainment value. Because this is where the wonderful Twin, refined at Q-Bike in Hamburg (www.q-bike.de) and there by twin fan Andreas Mecke, comes into its own. A Big-Bore-Kit from Triumph Performance USA – with cylinders milled from solid – pumps the displacement up to 994 cm³. Larger valves, revised ducts and the camshafts of the 790 Bonnie make it easier for the twin to breathe, and a lighter pole wheel to rev up. The highlight, however, are the faked flat slide carburetors. Of course, an injection system portions the fuel. But instead of the previous throttle valves housed in dummy carburettors, now, in their characteristic way, wonderfully chirping flat slide valves free the intake path.

This not only looks great, but is also advantageous in terms of flow, because at full throttle there is no longer a throttle valve obstructing the gas flow. The fresh air is sucked in through an aluminum funnel that has been turned from the solid. Their optimal length was determined in many, many test runs while driving. The waste gases are disposed of by a two-in-one system, the bends of which protrude magnificently from behind the oil cooler.

That looks like a lot of noise, but in normal driving the Tridays is quieter than an Aprilia RSV4 or Ducati Panigale. Only when the flat slide is on draft does it trumpet pithily from all pipes. What a treat.

And then this twin, runs buttery smooth from 2000 rpm, pushes forward like a steamroller. From below, from below. That rocks a lot, just unleash the torrent of torque at the corner exit and let yourself be pushed forward. In push mode, a cascade of misfires crackles out of the long tailpipe. The pure driving machine, here it is. Handy, stable, with a robust start. A hammer part that gets under your skin. And still wants to be tackled. Tight clutch, the gears click hard but precisely, the milled Brembo pliers – screwed, not monobloc – grip like bear traps. Great emotional cinema, carefree from the burdens of everyday life, completely committed to pure driving pleasure. If you want to experience it yourself and are ready to invest around 65,000 euros, Jochen Schmitz-Linkweiler will certainly add another copy upon request.