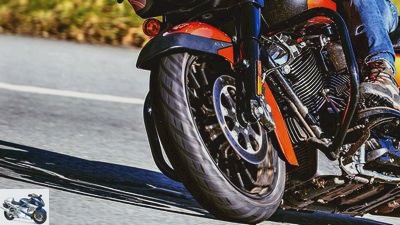 Mileage, mileage, mileage – a cruiser tire doesn’t have to be able to do more? Metzeler relies on grip, grip, grip. Our summary after 400 winding, sunny, but also wet kilometers.

If something runs like a red thread through the logbooks of the chrome-plated MOTORRAD long-term testers, then entries like this: “Inaccessible in the rain!” work, but at the first raindrop, the displacement cars buckle as miserably as Bud Spencer with a toothache.

Where there is shadow, there is also light

In terms of mileage, the hard rubbers are hard to kill. E-gliders who travel far away are happy – as long as the sun is shining. Interesting now is the new development of Metzeler for this segment: Cruisetec is the name of the freshly baked rubber for the “Long, fat & low-Bikes ”, which indicates a clear proximity to the“ Roadtec 01 ”tour profile, which was convincing in our tests. Above all, it can do one thing well: perform well in the wet. 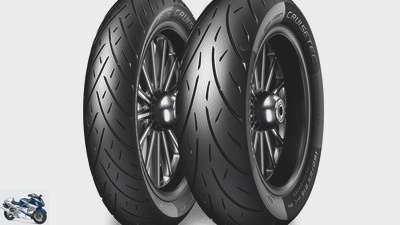 According to the internal specifications at Metzeler (see interview below), this was also a development goal for the Cruisetec. With four Harleys (including Fat Bob, Ultra Limited, Road Glide) we set out for an extensive test lap into the Brazilian hinterland, which had everything to offer over 400 kilometers: wide highways, winding uphill and downhill rides, plenty of sun, Thunderstorms on top. The results of our tour: stable straight-line stability when cruising on the autobahn, easy turning into tight corners, relatively good feedback (which in this category is also extremely dependent on the motorcycle) and – here it comes – a confident driving experience in the rain that is actually very reminiscent of its sister model Roadtec 01 . Of course, the rich wet grip pad will nibble on the mileage. Thanks to the two-component mix of the rear tires (softer shoulders, low-wear center), Metzeler also wants to achieve acceptable values ​​on this point.

MOTORRAD verdict: 4.5 stars out of a possible 5

As Metzeler test boss, Salvo Pennisi (62) has been the mastermind of all new releases from the Munich brand for decades. For the Cruisetec, Pennisi relied on an international development team.

MOTORCYCLE: We have the feeling that the big brands of the chopper and cruiser scene attach great importance to high mileage when it comes to initial tires. We know from our readers that they appreciate driving dynamics and a feeling of safety on wet roads. Did that make the development work for the Cruisetec difficult?

Salvo Pennisi: Choppers and cruisers are particularly popular in the USA and Canada, but we didn’t just build the Metzeler Cruisetec for North America. The European driver is also important to us. However, we have noticed that the demands on good tires are becoming more and more similar on both continents. When we presented the ME888 years ago, which remains in the program alongside the Cruisetec, it became clear that US bikers are not only interested in mileage. The big manufacturers like Harley-Davidson, but especially Indian as a new competitor in this segment, are now placing much more emphasis on the dynamic performance of a tire.

Salvo Pennisi: The aim was for a new cruiser tire from Metzeler to have the qualities of a sports tire. But how do you combine the dynamics – especially on wet roads – with high mileage? Of course, it was clear to us that the Cruisetec would be an extremely complex product, especially since we had to cover an unbelievable range of dimensions and types – both radial and cross-ply tires.

MOTORCYCLE: Then there is plenty of M7RR as well as Roadtec-01 know-how in the tire?

Salvo Pennisi: With the two-component mixture, we have now found an optimal mix of mileage and driving in the wet, which makes the Cruisetec unique. Just as unique as the development for which we have networked our teams internationally. I am proud that we have managed this “world project”. The fact that the Cruisetec is now being manufactured in Brazil and Breuberg underlines this once again.

The Metzeler Cruisetec convinced on the first test drive with a rich feedback and very good grip in wet weather conditions. However, the mileage may decrease slightly.