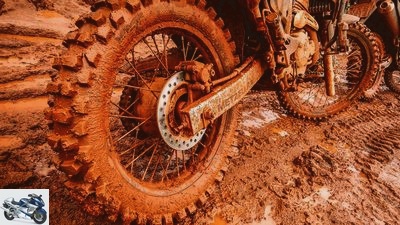 Two years ago, the MC360 had to prove itself in a very special endurance test. How is the successor doing??

MOTORRAD together with Honda and Metzeler the world record run in the Chilean Andes: from zero to 6000 meters within 24 hours. With knowledge from this extreme drive, Metzeler has further developed the MC360 accordingly and now offers it in two front wheel sizes in 21 inches and seven rear wheel sizes in 18 and 19 inches, both as a mid-hard and mid-soft version. The specialty of the MC360: It should not only convince in tough off-road competitions such as motocross, supercross, cross-country or freestyle, but can also be used on public roads as an approved tire.

Also as an approved tire for public roads

It wants to cover a wide range of applications, not to overheat or tear open, but at the same time to offer the best possible flexibility and traction in difficult terrain. Accordingly, we went on a 1,600-kilometer tour with the MC360, which took us from the Brazilian and later Bolivian tropical regions to the Andes and La Paz. The Grobstoller were fitted with tires in the mid-soft version on the Honda XRE 300 Enduros in the dimensions 90 / 90-21 at the front and 120 / 80-18 at the rear, which are very popular in Brazil. 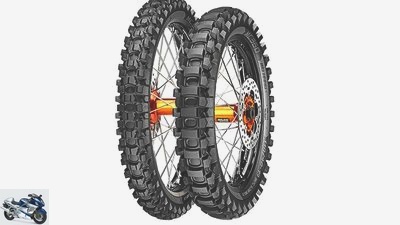 The Metzeler MC360 should also function as an approved tire on public roads.

In addition to a few asphalt passages, it was mainly on the typical “gravel roads” – more or less well-leveled gravel roads – from the lowlands over the legendary “Ruta de la Muerte” into the Bolivian highlands. The typical Amazon winter at this time of year adds to the special challenge – in other words: During the tour the rainy season prevailed in the region, and so the ride over every slope, no matter how well-leveled, turned into a special kind of mud battle at some point.

MC360 with a lot of potential

Sections where the highly compacted clay surface in combination with rain turned into an almost slippery soap-like surface turned out to be really treacherous – at the latest here it was shown in comparison to a typical on / off-road tire mounted on the tour guide’s Africa Twin was the almost unbelievable potential of the MC360. Undeterred, the hardcore off-roaders dug their way through these mirror-smooth passages. The other extreme, on the other hand, in ideal sunny conditions, where we could fly the little Hondas over the “gravel roads” at a speed of 120 without annoying walking movements – even with a reduced air pressure of 1.5 bar. And at the end of this tour, the running pattern of the tunnels was also impressive. A little highlight on the side: Without being bound to the direction of travel, the MC360 can simply be turned and driven on when it first shows signs of wear.

MOTORRAD verdict: 5 stars out of a possible 5

The traction in difficult terrain and the good stability were particularly impressive in the first test. However, the Metzeler MC360 shows minor weaknesses on paved roads.