Lovers of original roadsters and strong customs, the Moto Guzzi Bellagio has everything to seduce you. A machine that goes back in time without wasting time, both its chassis and its engine are efficient. Discovery of an unknown seductress. 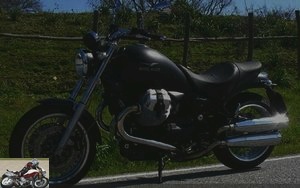 Named after a pretty village near Lake Como, the historic stronghold of Moto Guzzi, the Bellagio has been in the manufacturer’s catalog since 2007. This two-headed eagle is sometimes custom and sometimes roadster, with a very particular style. Camped on its superb aluminum spoked rims, it also surfs on retro fashion, like its potential competitors, the Harley sporster and the Triumph Speedmaster. The beauty likes contrasts and does not accept being cataloged in one box. 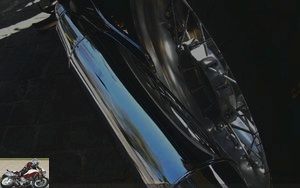 Rather pretty, the two superimposed exhaust mufflers hide the magnificent rear spoked wheel with its remarkable single-spoke. Too bad ! As original as it is, the Bellagio retains the conventional Moto Guzzi architecture: an air-cooled V2 in the longitudinal position and a secondary transmission by shaft and universal joints. While all Guzzis are so equipped, the solutions offered on the range are different. The more rustic is present on the 750 and on the California which have a rigid rear axle. More recent, the Bellagio benefits from the "CARC" (Compact Reactive Gimbal) a parallelogram system with 4 articulation points and double gimbals (therefore constant velocity). It is the same principle as on the Paralever BMW, or the Kawasaki 1400 GTR. 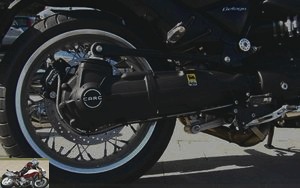 In use, the transmission of the Bellagio is much more discreet than a California and above all smoother and faster thanks to a 6-speed gearbox which benefits from a primary reduction.

With only 730 mm in height, the saddle offers a welcoming and wide seat to the rider who easily puts both feet on the ground regardless of his size. The "T-bar" handlebars fall well under the hands while the feet must go to seek the footrests slightly back. The bust is straight. Well fixed on the footrests you are ready to shoot down a 400 standing start. The older ones will undoubtedly have a little difficulty in accommodating their knees behind the cylinder head covers. The raised seat of the passenger seat prevents you from rolling back. You can put gas.

Before your eyes the asphalt and a very nice dashboard with a white background which also skilfully mixes old and modern styles. The fluorescent orange needle indicates the speed, while a digital dial located at the bottom right contains a multitude of information that can be scrolled through the handlebars: on-board clock, double trip, reserve, gauge, ambient temperature, voltage battery and average consumption are on the menu. It’s very complete, even if it lacks a tachometer which would not have been of much use with this engine …. 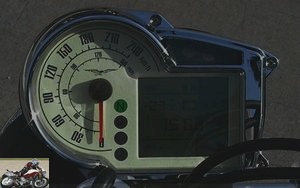 A boost on the starter and the twin two valves begins to rumble in the two superimposed exhausts. The noise is nice and the small sway of the motorcycle with each gas stroke reminds you that you do have a longitudinal twin between your legs. Very clearly supercare (95 X 66), it does not mind taking a few turns despite its distribution by rods and rockers. It’s rustic, but above all very lively. 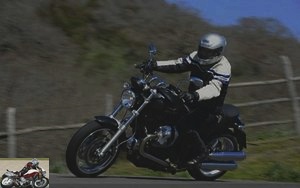 Clack we go first. The selection is a little firm but in clear progress compared to what we knew of Moto Guzzi in the past. It’s not yet Japanese standards, but close. Sitting low on a long wheelbase motorcycle with a 28 ° tilted fork, you ride at low speed with great stability from the first few meters. The mechanics are flexible and alive at the same time. We slide quietly in the middle of Fiat and other Alfa Romeo clustered on the Roman roads. The turning radius is certainly not great, but in congestion, this Guzzi is not a truck. 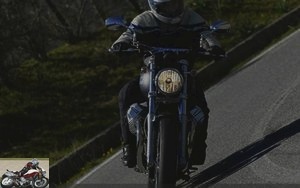 Go, we engage 6 and we see how it goes. The pickups are very vigorous, the engine full of character does not suggest that it makes "only" 75 horsepower as it is "punchy". We said to ourselves that we couldn’t care less about the law of 100 hp and that this valiant two valves offers all the sensations necessary to ride on the road. The position is no problem and the wind resistance is in the standard of roadsters. The manufacturer announces a maximum speed of 200 km / h. Better than most customs and more than enough for a roadster. 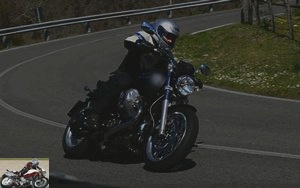 Pleasant terrain for a roadster, the national allows you to drive calmly with your nose to the wind. The Bellagio lends itself well to this because it is less prone to crime than a classic 4-cylinder roadster. Its torquey engine makes it easier to overtake and if you feel like it, in curves at high speed you will appreciate its stability, the rigidity of its chassis and its generous ground clearance.. 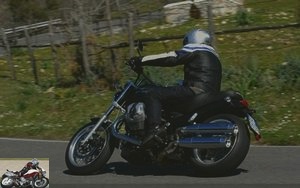 It is undoubtedly here and on the terrace of the small village cafes that you will enjoy your Bellagio the most. Equipped with a healthy chassis, good braking and provided with a good level of ground clearance, it allows you to have fun and support a driving rhythm more typical of roadster than custom. Here again, the vigorous pick-ups of its engine will propel you from one turn to the next without changing gears, which would not have really been a problem as long as you did not make corner entries by downshifting 3 speeds at the same time. stolen, which the box still hardly accepts.

Otherwise, it swings easily, with the low center of gravity partly compensating for the long wheelbase and the relatively sloped fork. No worries, the bike handles with great ease and you won’t be dumped by the friends, unless they wear the # 46 on their bike.

A pair of Brembo 320 mm with juxtaposed 2-piston calipers are enough to stop the 239 kg of the beast with the full ones (plus those of its pilot). Of course, this is a far cry from the latest radial calipers, but the Bellagio does not have to be ashamed of its braking against a roadster. It is powerful dosable and very broadly suited to its performance. Nothing wrong with the 282mm rear disc (2-piston caliper) either. Tutto goes bene ! 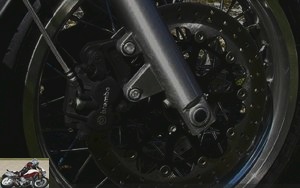 This is a bit where the shoe pinches. The fork is flexible and the saddle welcoming to the rider, but the rear cushioning is firm. Despite the 120mm of travel, it is a bit dry on small impacts and the lack of compression adjustment does not allow any real correction. Rebound, the only damping adjustment present, also acts a little on the compression, but a more progressive mono-shock like Fournalès would undoubtedly correct this relative defect better..

As for the passenger, he is not at the wedding perched on a narrow saddle without a grab bar. It’s probably no worse than a Harley jump seat or a sports car, but it still smacks of divorce if you hope to cross France as a duo. Note a "comfort" saddle available as an accessory against € 218 which seems to pay more attention to the seat of your traveling companion. 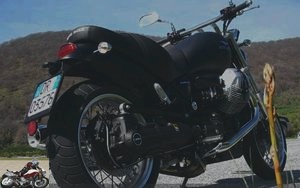 Adept at low revs (the maximum power is at 7200 rpm) the valiant twin is not worn on the drink. Expect an average of around 6l / 100 while riding at a good pace, which is reasonable given the level of performance. This gives us a range of 250 kilometers before passing the reserve. The tank identical to the California contains 19 liters including 4 of reserve.

What does it mean ? That the information from the meter scrolls on the handlebars, that the key is coded and that the secondary transmission by shaft is completely forgotten. Otherwise, it’s your turn to forget. If you want to transport luggage, a tank bag and a pair of rear bags with support are available respectively against € 227 and € 744 on the manufacturer’s Italian site.. 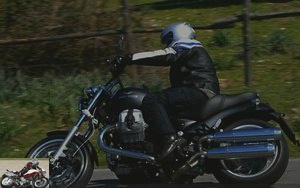 With the Bellagio, Moto Guzzi offers you a successful cocktail with a zest of originality, a touch of clacissism, honest performance, real sensations, a nice engine, good handling and efficient braking. Finally, just as remarkable is its price down by 1200 € compared to its launch. This now makes it as competitive as it is affordable. A toy to really have fun without going at crazy speeds, that is very appreciable today. If you can’t afford a customized American at great expense, opt for this Bellagio that you are sure not to see on every street corner…. and in addition with it, you will rot your friends in Harley.

Problem encountered: to add urgently to Santa’s list, but with the crisis I’m afraid he will refuse me.