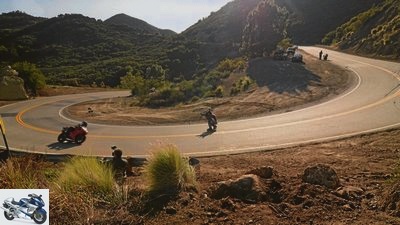 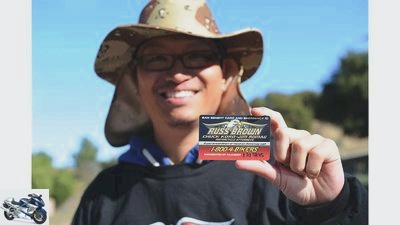 1/13
Always on site: Agents from Russ Brown insurance and lawyers especially for bikers. 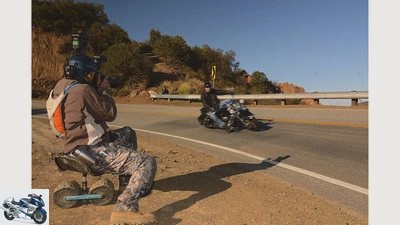 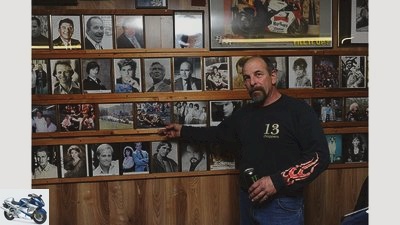 3/13
John is in “Rock store” a kind of girl for everything and likes to tell about the stars who like to stop by again and again. 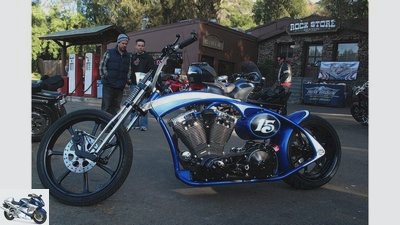 4/13
In front of the Rock Store Cafe, amazement is the order of the day. 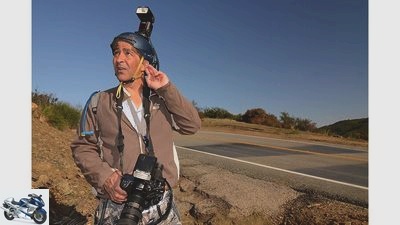 5/13
Photographer Paul Herold recognizes the vehicles by their sound. 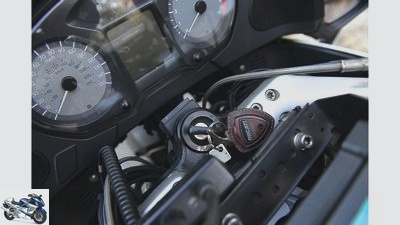 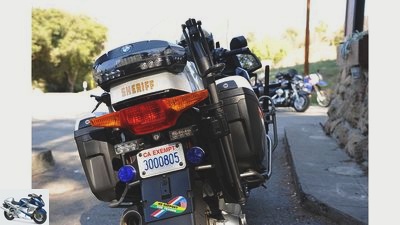 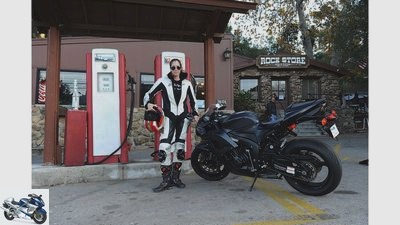 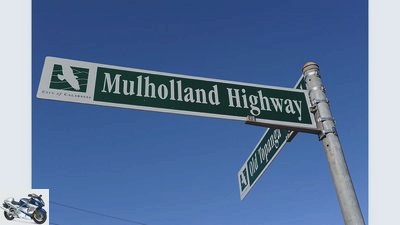 9/13
This sign clearly conveys: This is the way to go. 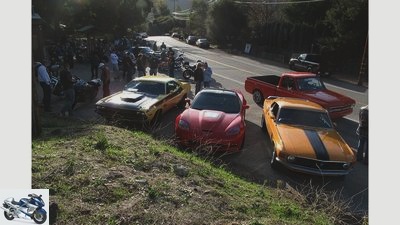 10/13
Cult meeting “Rock Store Cafe”: Mecca for people with petrol in their blood and a meeting place for the stars. 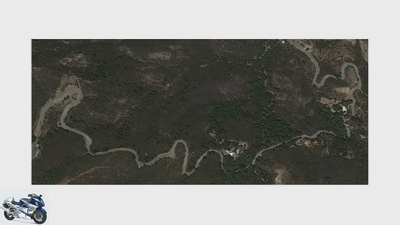 11/13
Seen from above, a five-kilometer stretch of the Mulholland Highway winds like a snake through the hills of southern California. 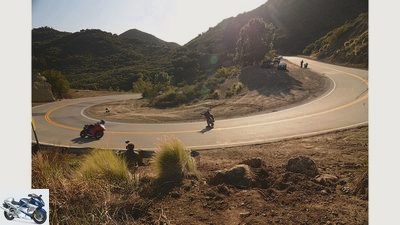 12/13
Best weather, fantastic curves. No wonder there are so many photographers waiting on the Mulholland Highway. 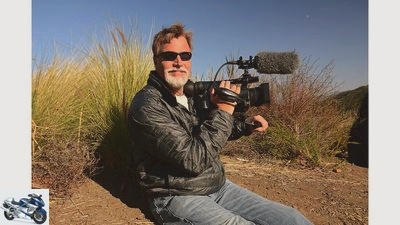 Seen from above, a five-kilometer stretch of the Mulholland Highway winds like a snake through the hills of southern California. It ends with a curve in which countless bikers fall. Why actually?

Ken Snyder lies in wait. His hand is like a funnel to his ear and he looks through the lenses of his film camera. He smiles. Batteries full, full of sun. The rumble of large-volume Vau-Achts and the screeching of high-revving motorcycle engines float in the air. A promise. With a little luck, the 55-year-old will manage another spectacular video today that will guarantee him a lot of advertising income. Snyder, who has already published countless videos on Youtube under the synonym “Rnickeymouse” and which have been viewed over 100 million times, is, as always, on the weekend in the so-called Edwards Corner, the last corner of a route that extends from the cult meeting place “Rock Store Cafe” meanders to the top of a small mountain range. A curve in which countless motorcyclists fall.

He is not alone. On the other side of the street, photographer Paul Herold lies in wait with his cameras. While Ken Snyder puts his fall videos online as a sideline, Paul can even make a living from his weekend photo sessions. The 55-year-old professionally photographs everyone who drives through the curve and posts the images on the web. 18,000 shots on the weekend are not uncommon.

His online catalog now includes 550,000 photos – that’s 6.5 terabytes! From Tuesday the photos – protected against illegal access with watermarks – can be seen on the website www.flickr.com. Anyone who has always wanted a tilted photo of themselves can buy the original in very good quality from Paul. Cost: between twelve and 24 euros per photo. 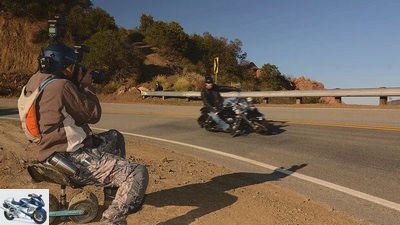 So what’s left? Try out! The Fireblade, organized at short notice, is exactly the right vehicle for this. Into the leather, up on the tarred snake, which gets off to a relatively unspectacular start. Dense bush and forest make the first bends and bends hidden from view, you turn blindly in first gear. The asphalt is easy to grip, the route can be seen, the curves wider. Second, third gear. In no time at all, the speed limit is far exceeded, so brake again. But please not like in a video by Snyder that has been clicked over 5.5 million times: You see a Kawasaki ZX driver scurrying through an alternating curve. He also overtakes a cyclist. Then the camera zooms back and stops at a police car parked on the edge. The Kawa-Biker rushes around the corner, sees the cops, brakes hard, smears over the front wheel and practically slides the cops in front of the car.

The whole haunt is over in less than four minutes. Edwards Corner is approaching from a right-hand slant. Here they fell by the hundreds. Palpitations. Gas on in a slight incline. View of the guardrails growing out of the ground on the right. One thinks involuntarily of the video in which the pilot of a Triumph Street Triple arrives here at tour pace, is probably frightened because he sees Paul with his camera and a few onlookers, and instead of turning in, brakes and slides straight on into the guardrails. The motorcycle comes to a halt, the driver rolls down the embankment. Spectacular. Thank God nothing happened to him.

Now it begins, the allegedly most dangerous curve in America. Start inside, just do not touch the two solid yellow lines, because there is zero grip on a large lean. At first you don’t see much, because bushes block the view of the further course of the curve. The radius is perfect, as drawn with a compass. The guardrail ends in the middle of the curve. Stay on the gas, second gear and look up. View of the parking lot. Lots of people, lots of machines and Paul, too, with the camera ready to shoot. Maybe you are scared. Or maybe you want to prove it to everyone who is standing there and gawking. However. Here, in the last third of the curve, 80 percent of all falls happen. And that has nothing to do with insufficient grip. Because you are still in an inclined position, but you can see the straight line that points to the pass. You are blinded by the sun. The curve closes a little in the last quarter. And it tilts inward slightly. Ultimately, the inexperienced only sees the straight line, thinks: great – and accelerates. Too much gas.

In an inclined position. Highsider. Lowsider. Slowsider. No matter what you call the falls there, they produce scrap, abrasions and ugly noises. And again a new video for Ken Snyder, which can be marketed very well.

A Kawasaki ZX rider flits through an alternating curve. He overtook a cyclist, smeared it away and slid practically right in front of the cops’ car.

With his Street Tripple, a pilot rushes into the Leiplanke at touring pace and crashes down the embankment. The machine stays up and surprisingly nothing happens to him. 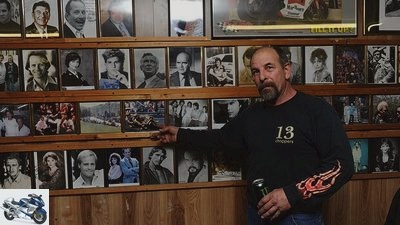 John is in “Rock store” some kind of girl for everything.

The “Rock Store Cafe” is the address for all those who have always wanted to have an uncomplicated coffee with stars like Arnold Schwarzenegger, Brad Pitt or John Travolta. Here, on the Mulholland Highway, at the foot of the route that the locals only call “The Snake”, the motor-loving stars meet. No wonder, because the “Rock Store” is only half an hour’s drive from Hollywood. Founded as a gas station in the 1940s, the station advanced to a kind of American corner shop in 1961. In 1963 the couple Ed and Vern Savko took over the shop. The warmth of Ed and Vern, who had a few nice words for everyone, soon attracted many car and motorcycle freaks who walked their vehicles on the Mulholland Highway at the weekend and liked to stop for a coffee or burger. Today, the “Rock Store Cafe” is one of the oldest motorcycle meeting places in the USA and, according to the “Los Angeles Times”, is considered the “Mecca for motorcyclists”. If you are in LA at the weekend, you should definitely stop by the “Rock Store”, because the bear is usually going on here. It doesn’t matter whether on two or four wheels. The rustic charm of the old store has been retained, the burgers are great, the waitress is always joking, and coffee is refilled for free. A huge room serves as a kind of museum. The walls are papered with hundreds of photos showing celebrities walking in and out of the “Rock Store”. And outside in the parking lot there are often vehicles that you would normally only expect to find in museums, on racetracks around the world or in well-guarded high-security garages of wealthy sheikhs or film stars. The good thing about it: Only people with gasoline in their blood meet here. There are no social hurdles. No matter whether Jay Leno drops by with his turbine bike or Steve McQueen’s son Chad with his Triumph – you can not only experience the stars up close, but also pat them on the back in a friendly way. 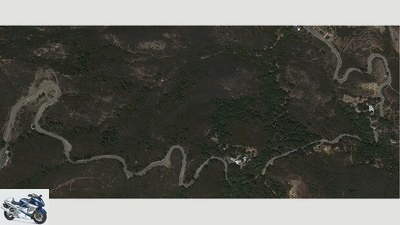 Seen from above, a five-kilometer stretch of the Mulholland Highway winds like a snake through the hills of southern California.

Paul and Ken are not alone in Edwards Corner, which is adjoined by a parking lot with a great view of the Santa Monica Mountains. Often a few dozen bikers hang around here to see which colleague takes Edwards Corner most elegantly or fastest. However, the German expression applause curve is not justified. Nobody claps their hands here. At most on the asphalt. “I’ve seen and photographed the craziest falls,” says Paul. “It bangs here every weekend.” The fact that not much happens is due, on the one hand, to the speed limit of 45 mph (73 km / h), which is strictly monitored by the police, and on the other hand, most drivers wear good leather suits with protectors. “In the 1980s we even closed the Snake to the public for a short time,” grumbles John Young, a county sheriff from LA. He drives a BMW R 1200 RT for work and drives a Ducati Hypermotard in his spare time: “Back then Illegal races were constantly being driven here, and there were many deaths. You had to react. “

Despite the many falls, the cops are calm about the hustle and bustle on the snake curve. “When the boys thunder around here, they can’t do any mischief anywhere else,” says Ken Dunkwell, a driver who has been driving the Snake for more than 20 years and has precise facts about it ready: four kilometers in length, 21 bends. Values ​​that initially sound very unspectacular. “Many of the people who eat dust or polish the asphalt are inexperienced,” says Ken, referring to a nearby military base. “After two or three years, many young boys end up there on the front lines in Iraq. These boys had to be careful in everything they did for years. Those who survived get some kind of bonus from the US government. Many buy thousands of them and are completely disrespectful to them. They just think: Hey, finally back home – nothing can happen to me here. ”A man with a broken leg stands next to Ken and shakes his head. No, that’s only half the story: “The snake is extremely dangerous, especially Edwards Corner.”