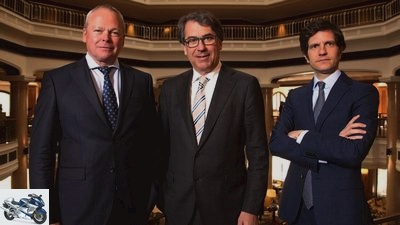 KTM and BMW bosses – in real life they are toughest competitors, but at the European level they jointly lead the motorcycle manufacturers’ association.

This is the result of the presidential election of the ACEM members at their spring meeting in Berlin. But Schaller also remains at the top of the association, with the BMW Motorrad boss becoming the new ACEM Vice President.

The members elected Michele Colaninno as the second ACEM vice-president. The Italian is the son of Piaggio boss Roberto Colaninno and also works in the Piaggio management team. After his election he said: “The ACEM Presidium will ensure that topics such as free trade, traffic safety and environmental protection continue to be among the core objectives of the association’s work.”

The European Association of Motorcycle Manufacturers ACEM is based in Brussels. It represents 18 European manufacturers of motorized two-wheelers and 17 national associations, including the Industrieverband Motorrad e. V. According to ACEM, the European motorcycle industry secures around 156,300 jobs within the EU.