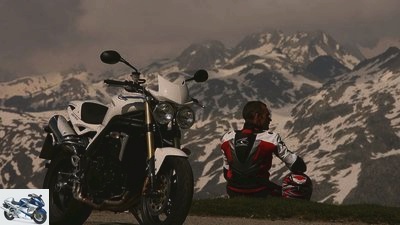 The Swiss National Council continues its initiative against loud engines. The focus is not on motorcyclists, but on all those who cause noise. Motorcyclists can still score a small partial success. Two driving ban initiatives have now been thrown out.

In March 2021, the Swiss National Council approved a proposal with a clear majority to further reduce unnecessary engine noise. The focus is not on motorcyclists, but on all those who cause noise. The environmental commission’s draft, which was adopted with 119 to 65 votes, provides for more intensive controls as well as higher fines, driving license revocation and vehicle confiscation as further measures. The so-called noise flashers were also called for again. So far, however, they are neither technically mature nor legally permissible.

The decision of the National Council is now going to the Council of States, which is to discuss it in the summer. The Federal Council will only deal with the drafting of legal regulations if the approval is given. This catalog of measures is not expected to be presented to the National Council until winter 2021/22. If he agrees, the package will go to the Council of States for a vote, which is unlikely to deal with it before summer 2022. If this also agrees, the agreed regulations could come into force at the end of 2022. If a chamber requests changes, the procedure would drag on.

As early as June 2020, the Swiss National Councilor Gabriela Suter (Social Democratic Party of Switzerland) had a general driving ban for so-called “noisy motorcycles” required in Switzerland. To this end, Suter had started two parliamentary initiatives that intended to create the legal changes for a driving ban on motorcycles with a stationary noise of over 95 decibels. However, Suter has now withdrawn both initiatives after failing to achieve a majority in favor at the meeting of the Commission for the Environment, Spatial Planning and Energy (UREK) on June 21, 2021.

“Tyrol is leading the way: From June 10, 2020, motorbikes with a noise level exceeding 95 decibels will be banned on popular excursion routes. In this way, Tyrol reacts to the noise nuisance caused by noisy motorcycles. Especially on the summer weekends, booming motorcycle traffic with high-speed driving when accelerating and braking disturbs the peace and quiet in the Alps. This noise-based driving ban for the first time in Austria should lead to a noticeable relief for people and nature.
In Switzerland, too, the overly loud motorbikes are a major nuisance, especially on popular pass roads in the foothills of the Alps and the Alps, but also in the Central Plateau. The noise affects people and nature excessively. Various approaches in parliament have so far failed due to the argument that the noise level must adhere to the EU directives in order not to jeopardize the land transport agreement with the EU. Since the driving ban in Tyrol is obviously EU-compliant, motorcycles with a level of over 95 dB / A should also no longer be allowed to drive in Switzerland.”

Suter got headwind from National Councilor Walter Wobmann (SVP), who is also the central president of the FMS (Federation of Motorcyclists in Switzerland). In an open letter, Wobmann addressed all Swiss motorcyclists and all politicians across all party barriers:

“We all have to fight back. Across all party lines, everyone who cares about the motorcycle hobby must now stand together. In any case, I will fight with full force. If everyone stands together, we can win. The next time will be decisive! You only really lose if you don’t fight. That is a principle of mine.”

In Switzerland there was an initiative on the subject back in 2016 “noisy motorcycles”. The required motorcycles that were already approved “disruptive emissions” produce, mandatory conversion or retrofitting. The abolition of grandfathering was prevented at the time only with a thin majority of 97 to 79 votes.

The clouds in the motorcyclist’s sky are getting darker and darker. It is currently not foreseeable that the motorcycle industry itself will become active and build quieter vehicles. Obviously, only legal coercion helps here. Until then, as motorcyclists, it is largely up to us with our behavior in road traffic to take the wind out of the sails of those who oppose noise.