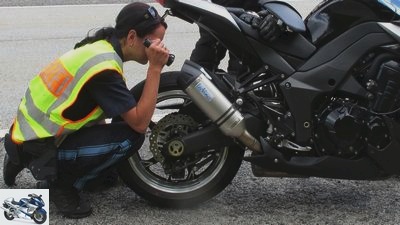 In Tyrol, the Austrian authorities already issued a driving ban for loud motorcycles on selected routes in the summer of 2020. Now the Greens are calling for a corresponding noise driving ban in Germany as well.

Standing noise barriers in Germany. With a bang Tyrol imposed driving bans for motorcycles with more than 95 decibels of standing noise on certain routes in June 2020. The experiment, which will run until October 2020, has caused a stir and attention far beyond Austria’s borders.

Tyrol now wants to check its effectiveness over the winter, and residents are to be asked about this. But even before the results from Triol are available, the now parliamentary group of the Greens is demanding the same for motorcycle noise “severely affected places” in Germany. And that’s not all. In a resolution on October 28, the Greens called on the German Bundestag, “to order the so-called Tyrolean model with road closures for motorcycles with a standing noise of initially more than 95 decibels.” Explosives are in the word “next”, because in the justification it goes on to say that the effectiveness of the blocking should be checked continuously. And then it comes: “If during the test phase in Germany the limit value of 95 decibels does not achieve a significant noise reduction after three months, the value (…) should be lowered further.” That means: A lot more motorcycles, which are completely legal in themselves, should then be locked out.

The Sunday and public holiday driving bans demanded by the Federal Council for certain routes in the spring are also not taboo for the Greens. They should be imposed according to the application, “if the noise reduction (through stationary noise limits, Red.) is not satisfactory.” In fact “Until effective measures to rule out particularly loud machines noticeably remedy the situation.” This is intended to create pressure on manufacturers in particular to generally offer quieter motorcycles in the future which – this is also included in the application – will not exceed 80 decibels in all driving conditions.