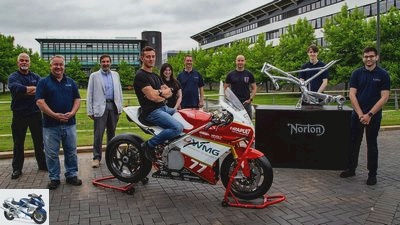 Norton supports the WMG team: the hand on the electric motorcycle

Norton supports WMG team
The hand on the electric motorcycle

The group of 13 students from the University of Warwick (WMG) developed a complete electric motorcycle drivetrain and turned it into one of Norton provided motorcycle frame inserted. The entire motorcycle concept bears the name WMG Frontier. The frontier was built in just seven months.

The electric drive train designed for the Norton frame has an output of 160 kW (corresponds to 201 hp) and delivers a torque of 400 Nm from standstill. In terms of driving dynamics, the Frontier is at the level of modern 1,000 super sports cars.

The electric motor draws its energy from a liquid-cooled battery pack that was developed and tested by the students. The battery with a capacity of 16 kWh is designed with a special thermal management system for a long service life and, at the same time, for larger short-term power peaks, as required by a racing motorcycle. The battery can be recharged in about an hour via the CHAdeMO connection and rapid charging. An 80 percent charge should be achieved after just under 30 minutes. During the entire project structure, the students were careful to use production techniques that could also be used later in series production.

“We look forward to supporting the engineers of the future, who are developing tomorrow’s technology today, on the basis of a Norton framework. Our support by donating the framework is just the beginning. The Norton design and engineering team was keen to watch this project take shape and provided advice and assistance to the student team where possible”, explains Robert Hentschel, CEO of Norton Motorcycles.

The British competitor Triumph is also developing an electric bike with partners. The key data of the Triumph TE-1 sound very similar.