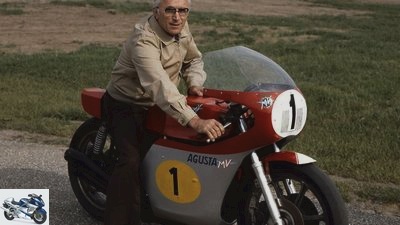 Arturo Magni died on December 2, 2015 at the age of 90. From 1955 to 1976 he was race director of MV Agusta. Because most, and above all, the most glorious MV world championship machines have passed through his hands, this designation is tantamount to a title of nobility.

A tribute to the successful technician.

Arturo Magni himself described his special position with all modesty. He was a better mechanic, he once said in a conversation with MOTORRAD correspondent Eva Breutel. Conte Domenico Agusta, the boss of MV, always made important decisions regarding the races himself in glamorous despotism. This self-assessment elegantly conceals the fact that little has been achieved and nothing has been gained for a long time when a racing machine is freshly assembled on its wheels. The manual implementation of a construction, the precise processing of engine and chassis parts, the meticulous adjustment of all components and all the detailed work that is more concealed than described by the term coordination has been the responsibility of Arturo Magni since he joined in 1950 MV Agusta began. As a simple mechanic, but probably already better then.

He was a tender 25 years old. Enthusiastic model aircraft builder and Italian master in long-haul flight in a self-made glider pilot, Magni began his professional career at the aircraft manufacturer Bestetti Aeronautica in Arcore, where he serviced the engines of military aircraft during the war. These place the highest demands on the care of the mechanics, and what Magni learned in dealing with them shaped him for life. He received the finishing touches in 1947 when he moved to Gilera, one of the oldest Italian motorcycle manufacturers, which was also based in Arcore. For the development of a 500cc four-cylinder racing engine, Ingegnere Pietro Remor was specifically looking for a young mechanic whom he wanted to train in his own way. The choice fell on Magni, and when Remor moved from Gilera to MV Agusta in the spring of 1950, he pulled him along.

With slight modifications, Remor designed and implemented his four-cylinder for MV again. Because the Conte Agusta had initially planned the new 500 as a street motorcycle, it received a cardan drive and a parallelogram swing arm to reduce cardan reactions. When Magni installed Moto Guzzi engines in his chassis decades later, he took up this technology again. The two photos of the first MV four-cylinder from 1950 and 1953 show, on closer inspection, how much the technicians experimented with different suspension systems, damping variants, and even shifting mechanisms as well as cardan and chain drives. With all these changes we can imagine Arturo Magni at work. Always at the interface between idea and realization.

In 1966, the MV racing team, under his leadership since 1955, had already gained so much experience that their next new design hit like a bomb: driven by a young Italian named Giacomo Agostini, the new 350 cc three-cylinder racing machine with a four-valve engine won its first Grand Prix use. Drilled to 377 cm³, later to 474 cm³, it helped Agostini to become the 500cc world champion in the same year. From then on, he won each of his MV World Championship titles on the constantly evolving 350 and 500 cc three-cylinder machines.

It is the motorcycle of the golden era of MV Agusta with 350 and 500 series titles wins, but often very boring races. The final phase of MV’s involvement in the world championship was far more exciting, in terms of technology a walk on a razor-sharp line between victory and failure. Sometimes Arturo Magni and his team were able to put real rockets on the wheels. For example in 1974 at Spa Francorchamps, when Phil Read pulled out several seconds ahead on the first lap after a sliding start, undercut the lap record and achieved the fastest race average in the history of GP sport with sustained engine speeds of 15,000 rpm. On the other hand, the technicians did not succeed in making the valve train of the newly developed four-cylinder permanently stable and in improving the stamping of the rear wheel when downshifting as well as the stubborn handling of the MV. In 1976 Giacomo Agostini drove the last Grand Prix victory of an MV Agusta at the Nurburgring.

After the closure of the racing department, Arturo Magni built MV street motorcycles in cooperation with the German MV importer Michael Hansen and together with his sons. On the basis of the old two-valve four-cylinder, machines with up to 1100 cm³ were created. He later put BMW, Honda, Suzuki and, as mentioned, Moto Guzzi engines in his chassis. The frames were always built classically from tubular steel, mostly painted red and have a strong dose of MV Agusta of the classic era. This is not a wonder; there is also a lot of magni in MV, after all.