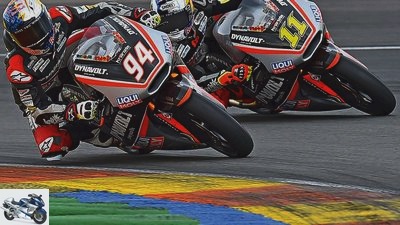 They also only cook with oil
MOTORCYCLE Oil Primer: Oil in Motorsport

The right engine oil plays a major role in racing. But special lubricants are not always used. Commercially available oils are used in many car and motorcycle series.

For us spectators, motorsport is nice to look at. For motorcycle and car manufacturers, however, the various racing series are much more: They not only polish up the image of a brand, but also inspire the development of series models. What did not come from the racetrack to the road – the disc brakes, for example, modern injection systems, aerodynamic components, double clutch transmissions or ultra-light but stable carbon parts. In short: Everything that relates to technology in motorsport is a little better – that should not be any different with lubricants.

“But” says Peter Baumann, Marketing Manager at the lubricant specialist Liqui Moly. “Only in Formula 1 does the oil differ significantly. Other racing series, on the other hand, are close to the series products. ”20 years ago it was different when the company had to adapt the engine oils for racing. That drove the development, today the know-how is so great, says Baumann, that one can use a commercially available fully synthetic Liqui-Moly lubricant in motorsport. The higher temperatures and speeds that a racing car develops would not pose a problem for the normal oils.

However, when it comes to modern lubricants, the teams cannot manage without coordination. It still matters where the race takes place and what time of year it is. It then depends on the viscosity of the lubricant. In European racing series, for example, the teams therefore mainly use 40, 50 or 60 oil viscosities.

Only a few exceptions

If, on the other hand, you look over to the kart area, you will find a special FIA-approved oil for the small two-stroke racers in the Liqui-Moly range. If this lubricant were to be filled into a scooter with a two-stroke engine, for example, the unit could at some point be damaged. Because this product is tailored to racing conditions and has to withstand extremely high temperatures, among other things. Wear protection, which is important to series engines, plays a subordinate role here.

This is pretty much the only exception when it comes to special products for motorsport. Even with racing motorcycles Liqui Moly a commercial solution. It seems to be paying off for all parties. Because the company from Ulm has been a permanent partner in Moto2 and Moto3 since 2015 and supplies the teams with the right lubricant. “But before that we had to provide 600 liters for bench tests”, says Peter Baumann. “In the end, the test engines had even more power.”

Not only motorsport likes to use Liqui-Moly products. Institutions that one would not have expected from are also part of the customer base, such as the European Space Agency (ESA). A few years ago, ESA was looking for a special high-performance grease for the Mars robot Beagle 2 and found it at Liqui Moly. But it wasn’t because of the fat that the robot refused to work after landing on the planet. 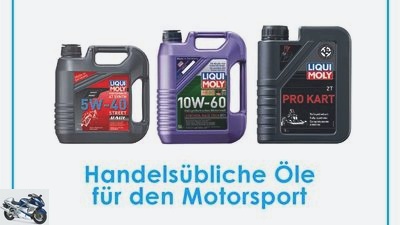 What Liqui Moly offers in motorsport is also available in stores for cars and motorcycles. There are three engine oils in the Liqui Moly range, which are easy to obtain and which also ensure a large coverage in motorsport. On the one hand there is the fully synthetic motorcycle product Motorbike 4T Synth 5W-40 Street Race, on the other hand the fully synthetic car engine oil Synthoil Race Tech GT1 10W-60. The Ulm-based lubricant specialist has developed the motor oil Pro Kart especially for karting. This product is intended for two-stroke engines.