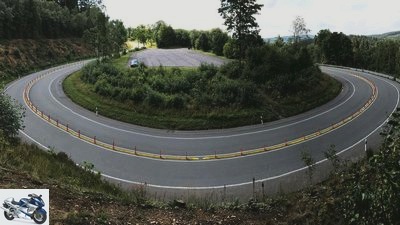 Convicted of beating hikers
Motorcyclist injured with a stick

On the L 707 in North Rhine-Westphalia, a hiker hit a motorcyclist with a stick in 2016. The Plettenberg District Court has now announced the verdict.

The video made the rounds on the Internet: A hiker crossed the L 707 in 2016 (“Nordhelle”) near Herscheid (North Rhine-Westphalia) and hit several motorbikes with a stick. He slightly injured a 25-year-old driver’s upper arm. Fortunately, she did not fall, but was able to stop her machine in a controlled manner.

The district court in Plettenberg has now sentenced the 48-year-old from Ludenscheid to a prison sentence of ten months and a fine of 2000 euros for dangerous interference in road traffic. The sentence was suspended for three years. In addition, the motorcyclist’s husband has to pay 500 euros in compensation for pain and suffering.

The L 707 south of Herscheid is popular among North Rhine-Westphalian bikers because of its curves in the Nordhelle area. After a blockage due to noise and accidents was discussed several times, the country now has the so-called applause curve with a lane divider (“Guiding threshold with beacons”) Mistake. This is supposed to make them unattractive for speeders, as it restricts the lane width and specifies a narrower radius.