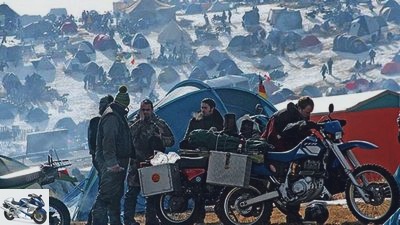 On the way: Elephant meeting in the Bavarian Forest

On the way: Elephant meeting
Crazy winter get-together in the Bavarian Forest

“The first come a week in advance”, says Wolfgang Schmitz about the participants in the elephant meeting, which takes place every year at the end of January. As head of the organization team, he is also active in the Loh cauldron in advance. Whether erecting snow and barricade fences or 45 toilets, Wolfgang is always on hand with his Sherco trial machine. Which not every participant will succeed, especially not with road tires; for the steep basin of Loh, the “Cauldron”, this mountain slope, which is almost like a funnel, offers icy and snow-smooth passages again this year.

On the way: Elephant meeting
Crazy winter get-together in the Bavarian Forest

In fact, some of the hardy people and machines at the elephant meeting arrive long before the main weekend, simply because they want to chat in peace, sit by the fire and enjoy the freezing cold at night without disturbance. Because despite global warming: In the heights of the Bavarian Forest the last few winters have always been colder, with nighttime temperatures well below ten degrees below zero. There you can calmly try out your cold cracking techniques, each of which has their own patent. The bivouac purists simply lie in the mini tent with the best possible down sleeping bag and sleeping mats. Others arrive as a group and build real tents, which they then lay out with bales of hay. Even smaller cannon ovens are carted to the meeting on motorcycles and sidecars. 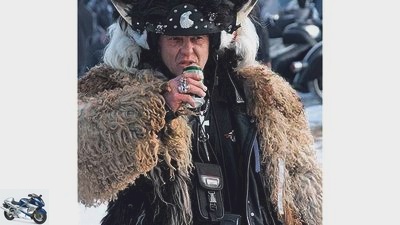 With the right clothes you won’t get cold either.

Klaus from Rottal am Inn is for overnight stays in the snow, everyone here “call the baron ”, well armed; Because the comfort of his team of Russians converted into a mobile home is downright noble: comfortable lying surface, good insulation, lined with pink plush on the inside and provided with a peephole, skylight and mosquito net. Whereby the mosquito net would not really have been necessary with the temperature of minus 15 degrees here tonight.

But the night is not the only cold test for winter drivers, the arrival and departure with a cutting cold wind is at least as good. Even if some visitors arrive by car and bring the motorcycle in the trailer, the tough men of the winter driving faction come all the way by motorcycle. Like Dmitry Balaev in 2009, who traveled 8,800 kilometers from Moscow via Jordan. Even with shorter journeys you are equipped accordingly: large windshield, wind deflector for the legs, thickly lined handlebar cuffs, in which you can put the warm gloves fully and which also do not let the warmth of the heated grips fizzle out in the wind. Not to mention the kidney belt with integrated heat pads or a self-designed heater for special cuffs on the footrests. The elephant meeting shows how the real cold cracks are on their way. 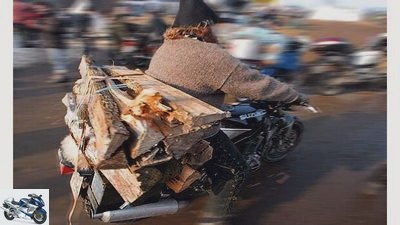 Bandit as a firewood transporter: There is little that the elephants cannot transport on their motorcycles.

And most of them have their main day of arrival on the Friday before the actual elephant weekend, the last weekend in January. By Saturday afternoon, almost all of the elephants have arrived and Loh’s cauldron is full. Last year there were over 4,000 participants: on an estimated 3,000 motorcycles and with almost as many tents. That made about 1000 bonfires.

The evening slowly descends over the elephant camp. Before the shop closes, a quick trip to Grafenau is made to the supermarket. Many a bottle of hard liquor is brought along. The day goes by and Johnnie Walker arrives. True warmth radiates from within. Most of them still don’t want to do without their campfire, and if you don’t have one, you will find room with the neighbors. The elephant meeting is really functioning socialism. Here you get together, make room by the fire, share a schnitzel, serve a plate of hot spaghetti or a cup of goulash soup. Swaps Obstler from Schladming for Barwurz from Zwiesel, Grappa from Vicenza for Slivovitz from Podgorje. And talk about gasoline. In German, Czech, Italian, English, French. The united Europe existed at the elephant meeting before the EU.

Then it is Sunday: all hell breaks loose on the section of road to Solla that is closed to cars. Carriages loaded with firewood stroll there, huge bales of hay are balanced towards the kettle on comparatively tiny enduros, a load of beer crates rattles in on the Kettenkrad from the Second World War. Many visitors plunge into the hustle and bustle of the Kessel as bystanders. The smoke from hundreds of fires gives off the atmosphere of a medieval army camp. However, with the background noise of a tank offensive, because a complete motorcycle club is dashing up the slope on Ural teams like thundering combat vehicles. Visitors are offered the baroque total work of art consisting of form, color and sound. And smell, because in the scent of the campfire, sizzling suckling pigs and smoking mulled wine pots, the two-stroke note of a Hercules K 125 Military that doesn’t really want to run is blended.

Starting problems and breakdowns are one of the favorite topics of the winter elephants, which every visitor or tent neighbor relates with glowing enthusiasm. “My 1100 GS is too perfect for me, ”says Michi from Neumarkt, a common opinion of the winter faction. And generally only travels to the winter get-together with his Chinese Yangtze team, which provides him with ever new challenges through a diverse potpourri of mishaps. “Three years ago I had to drive the last part to the meeting at night without lights because the electricity was only enough for the ignition, ”says Michi with a beaming smile. “But the real highlight was that the clutch also died in the middle of the mountains.” Then without lights and without a clutch for miles through the cold night. That can’t shake a snowman.

And an engine that won’t start either. In any case, the owner of a Russian team has been lying in stoic calm on a plate of ice under his Urals for over an hour, fiddling with the ignition – not very successfully, but apparently in the usual routine. He wrote on the tank of the very old and probably broken down machine “Olga, you pig ”. What a declaration of love! 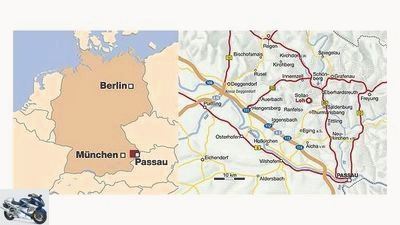 Duration of the meeting: 3 days with more than 4000 participants.

The meeting got its name from the Zundapp KS 601, once too “Green elephant” called. In 1956 their drivers met for the first time near Stuttgart, since 1961 the meeting has been organized by the BVDM, since 1987 they have met in Solla / Loh. Date 2010: January 29th to 31st. Information at www.bvdm.de. Also a “Old elephant meeting” has established itself, which takes place at the Nurburgring. Information at www.alteselefantentreffen.de

Directions:
Solla, located around 40 kilometers northwest of Passau, can be reached from the south on the A 92 towards Deggendorf / Passau, from the north via Regensburg on the A 3 towards Deggendorf / Passau. After Deggendorf take the Hengersberg exit and from there on the B 533 towards Schonberg and Grafenau. For the elephant meeting shortly before Schonberg in Innernzell, turn right to Solla and Loh. Or on the A3 to the Garham / Vilshofen exit and via Eging to Thurmansbang and then to Loh.

Accommodation:
The Hotel zur Post in Schonberg (Marktplatz 19, 94513 Schonberg, phone 08554/96160, www.hotel-post-schoenberg.de) offers free garage, drying room, screwdriver corner and tour tips for the Bavarian Forest and the border triangle for motorcyclists. The double room costs 62 euros. On the Friday and Saturday of the elephant meeting, all hotels in the region are fully booked. Early reservation is absolutely necessary! Room information is available from the tourist information centers Thurmansbang (phone 08504/1642, www.thurmansbang.de) and Schonberg (www.schoenberg-bayerwald.de) as well as from the BVDM (www.bvdm.de).

Literature:
MOTORRAD general map sheet 17: Regensburg, Weiden, Passau, 1: 200000, price 5.90 euros. For those who want to be very precise: Compass card no.196 “Mittlerer Bayerischer Wald ”, 1: 50000, price 6.95 euros. DUMONT travel pocket book East Bavaria, Regensburg, Bavarian Forest by Daniele Schetar and Friedrich Kothe at a price of 14.95 euros. “With hammer and key ”by Tom van Endert is the standard work for Ural and Dnepr team drivers and should not be missing in any sidecar overhead locker, price 24.90 euros.

Information:
In addition to the “Accommodation ”and the Federal Association of Motorcyclists (BVDM) there is information about the Bavarian Forest at www.ostbayern-tourismus.de and www.bayerwald-info.de.