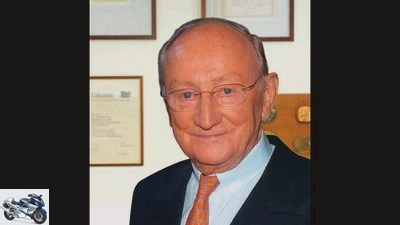 Portrait of a motorcycle enthusiast

Portrait of a motorcycle enthusiast
The person behind Detlev Louis

Dozens of shops bear his name. Four thousand parcels leave its dispatch center every day. But who is this man who supplies Germany’s bikers with chain spray, batteries and helmets?

For a moment, a mischievous smile flits across the face of Detlev Louis, born in 1919. And in his mind he turns the wheel back 70 years, is 18 again. A tough guy, a man possessed, a motorcycle maniac. Detlev Louis started motorcycling like many. Of passion. Against the establishment. Because it fascinated him.

In any case, his father doesn’t put any obstacles out of his way: “If you want to have a motorcycle, then you have to earn the money for it.” Did that stop him? No. But on the contrary. Actually, he wanted to get started much earlier. He was 16 or 17 when he stormed into Hamburg City Hall. The young Louis went on the pity tour: “My father is old and walks with a stick, I need a motorcycle license. I have to help him. ”The adolescent flew upright from the office. Because the official’s father was well known as a successful and respected lawyer in the Free and Hanseatic City of Hamburg. And it was anything but a stick. Even drove car races himself with his NAG Monza, which was a good thing in high society at the time. From a motorsport perspective, the thirties of the last century were a very vital time, when a Schorsch Meier in a BMW dominated the TT on the Isle of Man, the charismatic Bernd Rosemeyer set out on daring record drives for Auto Union and Mercedes-Benz created the legend of the Silver Arrows.

Detlev Louis grew up in a well-protected, elegant world. In the mother Louise made sure that the son took his piano lessons. In which father Bruno also turned a blind eye when the technically enthusiastic junior was already driving the family car around the Louis‘sche estate at the age of six. At the age of twelve, Detlev Louis experienced his first car race on the Avus in Berlin and was impressed by a blue Bugatti that was doing its laps there: “When I found out that the drivers were getting money for it, my dream job was certain: racing driver. But only at Bugatti. “

Until the motorcycle bacillus caught him. And neither paternal resistance nor official obstacles could contain it. Bread rolls were delivered in a 200 series DKW, which at that time could be driven tax-free and driving license-free, and later Louis delivered coffee to St. Pauli. And then “the first big money was there” to finance a “real” motorcycle.

He was finally able to buy a brand-new BMW R 51 in installments. The machine, which is comparable to today’s 1000-cc superbike, cost 135 Reichsmarks.

But Louis didn’t just want to ride a motorcycle, he wanted to race. That’s why the boxer went straight to Schotten. More than twelfth place, however, could not be made. Something better had to be found so that the bonus and new tires that the winner was entitled to came within reach. So the BMW was exchanged for a thoroughbred racer. A 350 Norton Manx promised more success. And lo and behold. In the second season the newcomer was already in second place on the same track.

At the racing events, Louis met Walter Lohmann, who had been running a motorcycle shop in Hamburg since 1938 – the nucleus of what would later become Detlev Louis GmbH. Before the two motorcycle enthusiasts can really take off, however, the Second World War breaks out. So the races are over, the 350 Norton is covered in the basement of the parents’ house until the mother sells it without the son’s knowledge. Louis can finish his engineering studies at the Hamburg Tech-nikum before he has to do his duty as a soldier in the Air Force on radar stations.

In 1945 Louis returned to Hamburg. In the city devastated after heavy air raids, he finally benefits from the commercial calculations that his maternal grandfather shaped. With the help of friends, he gets to work. British military machines are collected on cleanly swept coal trucks and made fit in Louis’ workshop. The wheelbarrow travels through the rubble desert of the Hanseatic City in search of acetylene, which is urgently needed for welding. It was the time of improvising and organizing. It was a time when there was a lot of worry and the goal for the day was just to get full.

In 1946 Lohmann officially quits, and Detlev Louis takes over the business single-handedly, expanding it slowly but continuously. A foreman, a journeyman, a tuner were the first employees that Louis employed; today there are over 1250 employees who work in the branches or at the company’s Hamburg headquarters. Detlev Louis sums it up today, but this growth was never explosive: “I saw the company grow up like a child. Only when you look back a lot later do you notice how big it really has become. ”

He was deeply impressed by the sentence of a friend: “You have to stay mediocre!” Of course, this did not mean the quality, but rather aimed at the balance of the company. Louis denies himself willingness to take risks: “I’ve always been a very cautious person.” Admittedly, as the businessman states, “the will of the customer is unfathomable”. But Louis had a keen sense of customer needs and always had the right products in the store at the right time. In terms of business, in contrast to some of its competitors, Louis did not want to venture into a floor that was too slippery. Continuity and tradition run through the management of his company to this day: The 88-year-old is supported by his son Stephan and Gunther Albrecht, who has been with the company for almost 40 years and is therefore almost part of the family.

Detlev Louis remained loyal to racing in the early years of his company. At AJS he completed field tests and “Around Isny” was on par with Hollywood icon Steve McQueen. The ease with which the young Louis once raced around the Hamburg city park on his beloved Norton was no longer wanted after the war: “You drove again. But the atmosphere from back then did not want to return. “

Seventy years of tough motorcycle business – so the Hamburg company Detlev Louis can look back on a longer tradition than many a motorcycle manufacturer. In 1938 the parent company was founded by Walter Lohmann in Hamburg, after the end of the Second World War it traded for a short time under the name Lohmann Louis and from 1946 onwards it was managed by Detlev Louis as the sole owner. The core business includes the sale and repairs of Zundapp and NSU motorcycles, and initial contacts are made with English manufacturers such as AJS, BSA or Matchless, and their imports are taken over later. At the end of the 1950s, Louis is Germany’s largest motorcycle dealer, and they move into new premises. In 1967 Louis published his first mail order catalog, two years later the Hamburg merchant took over the general import of Kawasaki motorcycles. In addition to the mail order business, the nationwide establishment of shops is increasingly becoming a business interest. The volume of the catalog, which is published annually, grew to over 350 pages in the eighties, and in the nineties around 2500 parcels and 80 euro pallets left the newly built shipping center in the south of Hamburg. Today more than 1250 employees work for Detlev Louis GmbH.