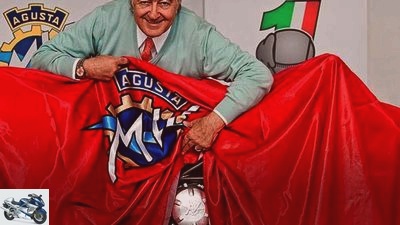 Claudio Castiglioni
The impresario and the Italian motorcycle history

For more than three and a half decades, Claudio Castiglioni played a decisive role in the dramaturgy of Italian motorcycle history.

Claudio Castiglioni has undoubtedly been one of the most colorful personalities in the Italian motorcycle industry over the past few decades and has always given impulses.

And not only in the creation of new products, but also in terms of design and technology. The 64-year-old died on August 17th in his hometown of Varese, leaving a great legacy behind.

Because without him would Ducati build diesel engines today, MV Agusta would have been nothing more than a glorious name in racing history, Husqvarna would make chainsaws and sewing machines, and Cagiva would never have existed. A Ducati 916 or MV Agusta F4 would never have made motorcyclists happy and racing drivers like Carl Fogarty, Doug Poland or Troy Bayliss never won a single Superbike world championship title on Ducati. But not only in the street scene, but also in off-road sport, drivers like Pekka Vehkonen, Dave Strijbos or Jacky Martens owe their Motocross World Championship titles to Claudio Castiglioni’s commitment. Not to forget the two legendary Paris-Dakar victories of Edi Orioli on the Cagiva Elefant.

The passion for technology in general and for two-wheelers in particular was aroused early on. Claudio Castiglioni saw the light of day on November 22, 1946, in the turbulent post-war period. In 1960 his father Giovanni founded a metal goods factory that produced items for everyday life, such as rivets and buttons for trousers. The business flourished when the sons Claudio and Gianfranco got on board, although they both shared a very special passion, namely that of motorcycles. That was hardly surprising, since the region was considered to be the center of two-wheeled motorsport. In the immediate vicinity was the Aermacchi plant, which had once produced seaplanes and now manufactured motorcycles, or MV Agusta, which at that time had subscribed to the world championship titles in the 350 and 500 classes under riders like John Surtees, Mike Hailwood and Giacomo Agostini.

When MV Agusta stopped racing in 1976, the Castiglioni brothers wanted to acquire the MV racing team, but Corrado Agusta preferred to let MV rest in peace instead of letting two rich kids use the glorious brand name.

Nonetheless, the Castiglionis bought a Suzuki RG 500 Production Racer, had it painted in the traditional colors of red and silver, and sponsored Marco Lucchinelli in the 1978 Grand Prix season. In the same year they took over the old Aermacchi factory from Harley-Davidson and renamed it Cagiva after their father GIovanni CAstiglioni, VArese. But they were less attracted by the range of everyday two-stroke models, they were much more interested in the Harley-Davidson racing team, for which Walter Villa had won four world titles in the 250 and 350 cc classes in the previous years. This provided the basis for their own 500cc GP team, with which they wanted to challenge the Japanese competition in the premier class.

At the same time, they restructured the motorcycle factory into the largest Italian two-wheeler manufacturer. Cagiva developed a successful off-road range and produced 40,000 motorcycles a year. At the same time, in 1980, under Virginio Ferrari, they fielded a 500 that was made entirely in Varese in the top class. And although they invested billions of lire, it would be July 12, 1992, before Eddie Lawson clinched the first Grand Prix victory for Cagiva in the wet race in Hungary. In 1994, his successor John Kocinski also convinced the last doubters of Cagiva’s competence when he won the first race in Australia and finished the season third in the overall standings with several podium places. The Castiglionis then withdrew from Grand Prix racing, which had put a huge strain on Cagiva’s finances.

As early as 1983, another Italian manufacturer, Ducati, was in deep crisis. Less than 3,000 motorcycles left the factory each year. The owner, the state-run VM group, gradually transformed the company into a manufacturer of diesel engines. Ducati’s future looked rather bleak until the Castiglionis took over in 1985. They commissioned chief engineer Massimo Bordi to design a new engine that was supposed to be groundbreaking. The Desmoquattro of the 851 was the first Ducati creation with electronic injection, water cooling and four valves per cylinder, each controlled by two overhead camshafts, desmodromically of course. It formed the basis for a series of engines that have won no fewer than 13 Superbike World Championship titles under riders like Fogarty, Poland and Bayliss to date.

While brother Gianfranco gradually withdrew from the motorcycle business, Claudio Castiglioni acquired the small but fine development center of the Bimota company founder Massimo Tamburini, which started a fruitful collaboration. In 1988 he also took over Husqvarna and established the brand in Varese. It was supposed to replace the off-road segment from Cagiva and celebrated sporting successes in series with its products. In the Castiglioni era, for example, they had no fewer than 21 enduro, three motocross and five supermoto world championships. The traditional manufacturer Morini also appeared briefly in the Cagiva portfolio, but the company only played a brief interlude in the company association. 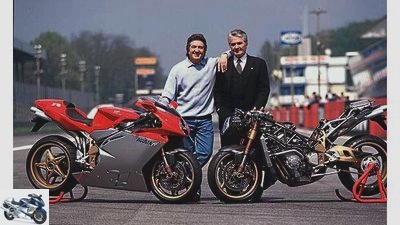 Claudio’s personal understanding of exciting design and the latent desire for innovation prompted him to inspire Massimo Tamburini for a new task. He promptly created such a groundbreaking work as the Ducati 916. But the Castiglioni family’s financial problems did not spare Ducati either. When the last shares were transferred to the American TPG Group in 1997, Claudio Castiglioni had to swallow a bitter pill. But at that time he was already concentrating on the inline four-cylinder with radial cylinder head, which Cagiva had been producing since 1994.

When Claudio Castiglioni presented the sensational Tamburini project at the Milan trade fair in November 1997, it provided a real surprise. He had acquired the rights to the name MV Agusta and revived the brand – his childhood dream was fulfilled. But the start of production of the MV Agusta 750 F4 was delayed and Castiglioni ran into financial problems again. They finally forced him in December 2004 to sell the majority of the shares to the Malaysian company Proton. Only a little later he sold his shares to GEVI, a financial group from Genoa in which Castiglioni was a minority shareholder. In 2007, GEVI sold Husqvarna to BMW in order to concentrate all resources on MV Agusta, even though Husqvarna was making a profit. Claudio Castiglioni was deeply disappointed with this step and MV Agusta was also in danger of having to close the gates.

But again Claudio Castiglioni pulled a trump card up his sleeve. In July 2008, Harley-Davidson took over the company – exactly 30 years after the US brand had sold Aermacchi to the Italian. Harley installed Castiglioni as president of MV Agusta, and now nothing stood in the way of the further development of the four-cylinder and the new development of a 675 three-cylinder. The optimism only lasted a year. The collapse of the US motorcycle market during the financial crisis hit Harley-Davidson hard. The Americans had to close Buell and offer MV Agusta for sale.

With the help of his son and business partner Giovanni, the boss conjured a rabbit out of his hat one last time. On August 6, 2010, all MV Agusta shares became the property of the Castiglioni family.

Two months later Claudio Castiglioni celebrated his last big stage appearance at the presentation of the breathtakingly beautiful three-cylinder MV Agusta F3 at the Milan trade fair. His talent for dramaturgy and his sense of beauty and innovation flashed once more before he stepped away from the big two-wheeler stage forever. Even if the company patriarch has not only climbed heights, but also traversed deep valleys, he has always been able to set trends and write motorcycle history with milestones such as the Ducati 916 or the MV Agusta F4.