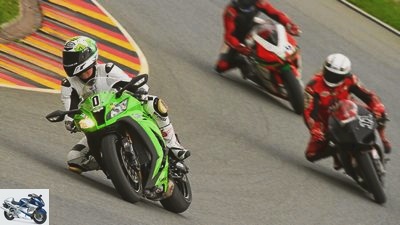 Prize question: What happens when five professional racing drivers meet twenty-five full-throttle hobby drivers at the Sachsenring? It will definitely not be a coffee party!

Ulrich Jager flies towards a blind knoll. He is full of it, although he doesn’t know where to go. His guide? The stern in front of him. He has to stay tuned, he mustn’t lose that. It belongs to Pascal Eckhardt, ex-IDM Supersport driver. The amateur racer Ulrich follows the line and the instinct of the professional: stay seated and get faster. Up, down, back and forth! The Sachsenring is the purest roller coaster. After the first turn, Ulrich tears his helmet off his head. Drops of sweat roll off his forehead, his hair sticks wet to his head: “Without an instructor, you are completely lost here at first,” says the 42-year-old sports teacher from Saarland. Every year he goes on the route for seven to nine days. Hockenheim and Salzburgring, he knows every corner there, but not here.

24 other candidates followed the call for horsepower for the first VIP training at the Sachsenring: guided heating with real racing drivers. Including Max-Neukirchner from the Moto2 World Championship, Dario Giuseppetti, Christian Kellner and Pascal Eckhardt, all known from the IDM, as well as Rene Raub, the long-term long-distance World Championship driver. Five amateur racers each clamp behind one of the professionals. The division is based on lap times in order to form teams that are as homogeneous as possible. Two days with six 20-minute turns each lie ahead of them.

After each turn, the participants hole their instructors: Where can I accelerate earlier? Grip, line, braking points? Ulrich struggles with the insidious omega curve and the following triple links over a blind hilltop. “In the beginning it is difficult to find the ideal line. You need someone in front of you who you can trust one hundred percent, ”he explains.

At lunchtime, everyone dines together in the catering box. The VIP participants discuss their experiences on the track, the racing drivers about their work colleagues. Sentences like: “Jorg Teuchert is an animal! He doesn’t just talk, he does his thing! ”At some point, Dario Giuseppetti imitates Italian racer Valentino Rossi in proper style with brittle English:“ Hello my good ol ‘frriiends. I am Valentino. Bridgestone makes veeery good tires. It’s se best you can get. “

Early afternoon, outside temperature above 30 degrees. The sun burns mercilessly on the East German route. The air shimmers, the leather suits drip, the heads glow. Ulrich drinks liters of water to avoid falling unconscious from his Aprilia RSV4. But our hobby pilot really lets it crack. Again and again he fires around the course with Pascal Eckhardt’s group and improves his lap time. After the fourth turn things finally go smoothly: “Now I know where the braking and acceleration points are! It’s a great feeling to be guided to your limit in a controlled manner. ”The other groups are also getting faster:“ The guys are really pulling the cable and are all in a good mood, ”said IDM Superbike rider Dario Giuseppetti, recognizing the ambition of his group. 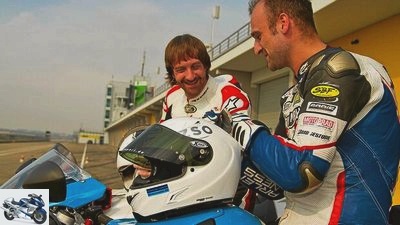 After the last turn, the Italo-Berliner walks with the participants on the racetrack and gives tips on individual passages. The 27-year-old, who also looks after the ADAC Junior Cup, advises the fast Saxon curve: “With long curve radii, you have to put a lot of pressure on the outside of the curve, this increases the grip when accelerating out.” To the sloping paddock curve, he says with a smile: “Some of you have your knee on the ground faster than I… But be careful, this makes falling really ouch.” And he gives a final piece of advice: “In the end you have to accelerate, it doesn’t help ! Then comes the speed and with it the fun. ”Ulrich stands on the racetrack with a beer, the evening glow on his face. He laughs.

Finally, editor Robert Gluck chats from the sewing box. How complex a photo production is, for example. And how dangerous: “If a test driver twitches during group rides, it quickly leads to a fall. Even if everything looks very easy, it’s really a matter of trust. ”The evening ends with grilled meat, draft beer and light conversations.

Second day. The route is internalized. Everyone seems more confident and aggressive, including our hobby racer Ulrich Jager. “We can happily increase the speed,” says Pascal Eckhardt in response to the group’s request. Around noon, Ulrich says with satisfaction: “After a day and a half, I feel really good here. It feels like I could drive into some corners even faster than Pascal is pretending to be. “

With the increasing speed, many participants now also want to adjust their chassis properly. The chassis specialist Rudiger Kranz from Mototech looks after each one individually. He pushes in the rear of Ulrich’s Aprilia RSV4 deeply and watches how it rebounds. “It comes out nice and creamy, and the tire looks evenly,” says the expert and explains: “For many, the rebound stage is too soft, then the box jumps like a billy goat!” In the end, he brings up the basics of the chassis The following rule of thumb: “If you have trouble with the motorcycle, either the shock absorber is shitty or the air pressure is shitty or the driver is shitty – or everything together!” Everyone grins and nods.

The pungent smell of rubber and gasoline wafts through the box for a while. The first PS VIP training is history. Sports teacher Jager: “Really great! If the date fits, I’ll be back next year. ”Let’s see what his students think of it.