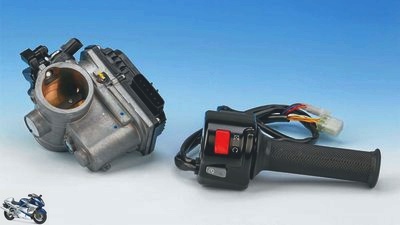 KTM is the first manufacturer in the world to do without the gas cable on a motorcycle with a gasoline engine. Instead of the mechanical connection for opening the throttle valve, the 690 Duke uses a real “ride-by-wire” system for the first time. PS explains the functionality and advantages of this system.

The throttle cable is dying out! The car shows how it is done, the motorcycle imitates it. Just as injection, G-Kat or ABS have already been adapted from the automotive sector in motorcycle construction, the end of the throttle cable will also spill over from the four-wheelers to the two-wheelers.
The so-called “ride-by-wire”, strictly translated “driving with the cable”, will bury the classic, mechanical connection between the throttle grip on the right handlebar end and the slider in the carburetor or the throttle valve body. Certainly not on all motorcycles, but on all those that are interesting from a horsepower point of view.
KTM recently set a technological milestone with the new 690 Duke and launched the first motorcycle with a real RBW system (ride-by-wire system). Reason enough for PS to take a look behind the scenes of modern throttle control. Together with the responsible KTM engineer Daniel Mairhoermann, we describe the development of the RBW, explain its functionality and advantages and dispel prejudices.

Where does it come from?
Up to the year 2000, carburettors for mixture preparation and engine throttling were common on motorcycles. The system was simple and consisted of the throttle grip, one or, on sports bikes, usually two throttle cables and a carburetor. The driver turned the throttle, the opening cable was rolled up and opened the slide in the carburetor. The engine got more air, more combustible mixture was formed and the engine revved up. To reduce the engine speed, all you have to do is close the throttle grip or simply let go. A spring in the carburetor then closed the slide very quickly, and the engine continued to run at idle speed.
However, this classic type of mixture preparation and load control came to its limits due to increasingly strict emission standards and the required “regulated combustion” of the mixture – the changeover to injection systems, very quickly with double throttle systems, began. 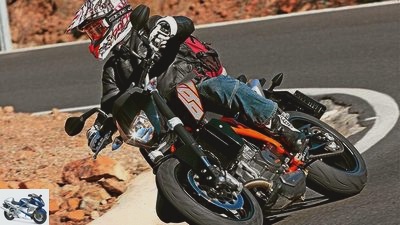 Looks good, but is a milestone in motorcycle technology. The 2012 690 Duke is the first motorcycle with a real, fully electronic ride-by-wire system.

What does RBW bring?
The great advantage of the fully electronic RBW system compared to the EPT system is that the ECU and the electric servomotor of the throttle valve can act completely automatically. This holds enormous potential, especially when starting the cold engine. Thanks to the electronic control, the catalytic converter can be “heated” in the first few seconds of operation after the start-up process. As a result, it reaches operating temperature more quickly, and exhaust gas decontamination begins more quickly in the critical start-up phase. The catalytic converter heating is implemented via a sophisticated programming of the ignition in combination with the throttle valve control.
Other plus points of the RBW, in addition to the cheaper components, are better engine control while driving, control of the engine braking torque when coasting, i.e. when braking, and the use of several driving modes. Via the different programming of the modes stored in the ECU, which can be selected by the driver, the engine characteristics can be adjusted from mild to wild with regard to power output, response behavior and engine braking torque.
The current 690 Duke comes across as a tame, forgiving entry-level bike in mode 1, turns into a super-spontaneous weapon in mode 2 and combines the best of the two modes mentioned in mode 3 – it rides in a sporty way with a good feeling for the engine.

How does it work?
Two potentiometers with independent power supply are located in the throttle grip housing, which separately supply the driver’s request to the ECU. Since this is done electronically, i.e. without mechanical resistance from the throttle cables and the counter-pressure spring in the carburetor, the feel for the throttle grip must be generated by a ring spring. Alone the coordination of this spring, which is responsible for the feeling of the throttle grip and its actuation force, i.e. the “throttle response”, is very difficult. 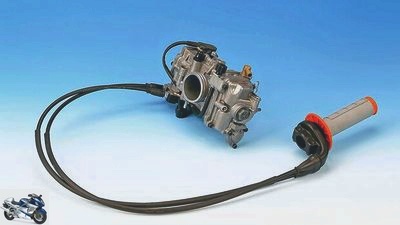 The classic: throttle grip, two throttle cables and a carburetor. Tap up and go forward.

In the ECU, two independent processors, which also monitor each other, process the driver’s request. The current driving situation is recorded through further inputs on the ECU, such as gear recognition sensor, clutch switch, side stand switch, engine speed, engine temperature, ambient pressure and throttle position. If the motorcycle is stationary or driving, is a gear engaged or not, if the engine is warm or cold, the driver turns the throttle quickly or slowly?
Once the scenario has been clarified, the driver’s request can be implemented. A target throttle valve position is aimed at, depending on the driving situation and the driver’s wishes. For this purpose, the ECU queries the actual status, i.e. the actual status of the throttle valve, via the throttle valve sensors, which are also present in duplicate. If this deviates from the target throttle valve position, the servomotor of the throttle valve receives the signal to regulate the position according to the target value. The throttle valve itself cannot be regulated to the nearest degree, but even to a tenth of a degree. What is necessary, after all, half a degree more throttle valve opening angle when idling a 690 KTM Duke means around 1000 rpm higher idling speed! 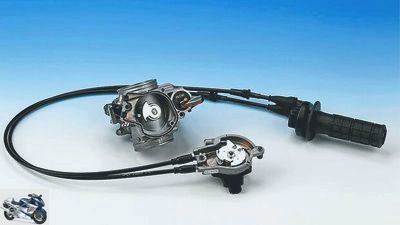 The present: the “driver’s request generator” sits on the throttle body and is operated via throttle cables.

The great advantage of the RBW system is precisely that the ECU can override the driver’s request. Just one example: you are strolling through a village in fourth gear at 55 km / h. The Duke purrs softly to herself. At the end of the village you simply give full throttle and the motorcycle accelerates smoothly but sustainably. With a carburettor-fired engine or with an injection with direct throttle valve connection via the throttle cable, this maneuver would either have resulted in the engine suddenly stalling or the motorcycle would have hopped forward nastily on the chain.
Not so with the RBW Duke.
Here the ECU recognizes a driver’s request that is nonsensical. 100 percent throttle valve opening in high gear with low load – the death of every single. The ECU reacts as follows: The driver’s request, i.e. the maximum acceleration, is recorded, compared with the actual value of the throttle valve position and many other parameters, and a reasonable setpoint value is specified for the servomotor in the throttle valve body.
The servomotor of the throttle valve opens it up to the intended opening angle, which is 60 percent, for example. The Duke accelerates to the max. The driver does not even notice that his wish to open the throttle valve 100 percent at low speed has been ignored because the Duke accelerates to the maximum at a 60 percent opening angle. 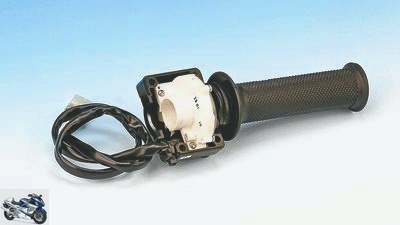 Look into the throttle. The ring spring creates the driving experience, the black ring gear transmits the driver’s request to the Hall sensor, which is located in the small gear.

It can fail?
“Something can certainly break in the RBW system. But there will never be an uncontrolled or undesirable acceleration. We are safer than any other system – including the throttle cable and carburetor, ”says KTM developer Daniel Mairhoermann.
All safety-relevant parts of the RBW system are built redundantly. It has two independent, mutually monitoring processors in the ECU. This means that the processors perform arithmetic tasks for each other and have to provide each other with the correct result. 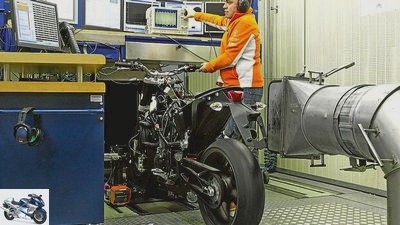 The development and coordination of the RBW system required countless hours on the KTM test bench.

As already mentioned, driver input detection and throttle valve sensors are also designed twice. The driver’s request and throttle position are calculated independently of the two processors in the ECU and compared with one another. By comparing the signals, errors can be recognized immediately and the system can be switched to emergency mode or, in an emergency, switched off immediately by interrupting the ignition. Even with mechanical defects in the throttle body, there will never be uncontrolled acceleration. If the throttle valve is stuck, this is also recognized and the engine is stopped by interrupting the ignition. 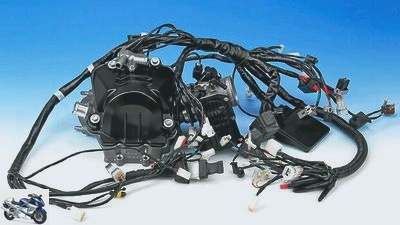 This is what the wiring harness of a 690 Duke with cylinder head, throttle body and ECU looks like.

The throttle valve itself works against a closing spring via the servomotor. If the servomotor is de-energized, the spring immediately closes the throttle valve. The spring is also checked with every starting process. Should it break, the engine would remain operational in emergency mode and the driver could slowly drive into a workshop.
Due to the great advantages of the ride-by-wire system, especially in terms of drivability and exhaust emissions, engineer Mairhoermann assumes that RBW will prevail in modern bikes with high-performance engines in the next five years. Ducati is in the starting blocks with the 1199 Panigale, Triumph with the Explorer. Only one thing must never happen: a network of the ride-by-wire system with a GPS module. Then, at times purely hypothetically, the legislature could regulate the speed of a motorcycle for a specific location – regardless of the driver’s wishes. A terrible idea, but Pandora’s box is already open…