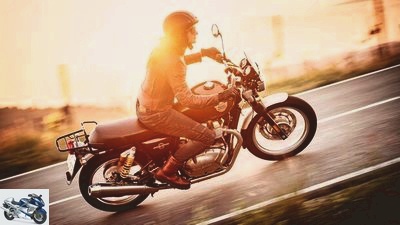 What happens when three people meet with the same interests? You start a club. The Indian motorcycle manufacturer Royal Enfield is now also offering this to its European customers.

For many, riding a motorcycle is such a community thing. Royal Enfield is now accommodating the biker soul and founding the Riders Club of Europe – a Europe-wide platform to promote the exchange between the Royal Enfield riders and to share common brand experiences.

The central aspect of the club will be an extensive program of tours, brand experiences and events. Tours, meetings and events for the club members are organized and hosted through the dealers.

An annual donation drive is organized centrally by the manufacturer. The Riders Club Community jointly supports selected charitable organizations across Europe. To the “One ride” Brand lovers around the world meet for regional excursions, during which donations are collected.

The club also takes care of the physical needs of the Royal Enfield drivers and takes over their catering at selected events and trade fairs. Of course, club members can also browse an exclusive range of tours, rental motorcycles and events.

The bike as a club card

But a club is also a club because it has members. The Royal Enfield driver acquires his first year of membership with his Royal Enfield. This applies to all current and future Royal Enfield owners. There are so far no plans for a club fee in the following years.

Club life starts on April 1st, 2021. From this day on, all Royal Enfield owners can activate their official membership in the Riders Club, choose their Riders Club dealer and complete their own driver profile. The selected dealer acts as the central point of contact for activities. In addition, members have access to Europe-wide Royal Enfield tours and events.

Royal Enfield tries to bring its customers together in a club to form a community and thus strengthen the brand experience. Nice idea if you like clubs.