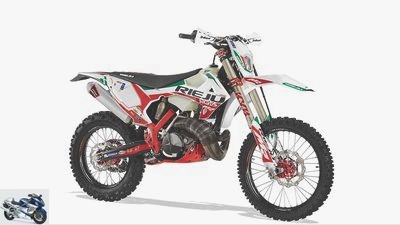 Rieju from Spain offers its 300 Enduro as a special model. The new Six Days variant will only be built in an edition of 100 copies.

After the takeover of GasGas by KTM secured Rieju the technical platform of the Ex-GasGas two-stroke models and brought a new competitive enduro onto the market in 2020 with the MR 300 Racing. Now the Spaniards are pushing one based on this model Special version of the current MR 300 in anticipation of the Six Days 2021 at the end of August / beginning of September in Italy.

Many parts from the range of accessories

The Rieju MR Six Days Italy, which is already starting as a model of the 2022 year, takes over the complete 300 two-stroke technology of the basic model. In addition to the special model, they have numerous add-on parts from the factory accessories range as well as a color scheme in green, white and red – the colors of Italy. The extended equipment includes a new racing exhaust with adapted mapping, a new oil-cooled starter, a new engine protection plate and new footrests.

New off-roader based on GasGas

Rieju will take part in the Six Days in Italy and is launching a corresponding special model in advance. It comes packed with accessories and in the Italian national colors. Only 100 copies will be built.