At all levels, Royal Enfield is on the rise and the analysis of facts and figures makes you dizzy. We can even safely say that Royal Enfield is the brand that has experienced the strongest growth in the last decade. Imagine that 10 years ago, Royal Enfield struggled to manufacture 30,000 motorcycles per year and today, it makes 50,000 per month. In India, this therefore led to the construction of a second production plant, which is constantly expanding and whose size is doubling every year. Royal Enfield bought out the English frame maker Harris, briefly rubbed shoulders with designer Pierre Terblanche, opened an R&D center in Great Britain, and downright hired a dozen former senior technicians from Triumph headquarters (including thinking of product planning), while the product plan is supported with the Himalayan 411 trail planned in the concessions at the beginning of summer 2017 and the arrival of the vertical twin 750 a little (but not much) later … The context is also buoyant since the retro trend which has been asserting itself over the past few years constitutes a fertile ground for the brand. In France, the current importer, the DIP, took over the brand in 2012 when it sold less than 200 motorcycles in France and has now brought it to more than 1,000 units sold, while the progress recorded in terms of of reliability were beginning to be more widely recognized. A great success story !

Finally, Euro 4 promises to be a formality (while not long ago, all motorcycle players predicted the end of air-cooled engines) and in early 2017, the Royal Enfields will arrive with a disc brake at the rear and ABS. 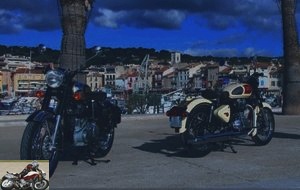 In the meantime, the current range is composed of the "sporty" Continental GT 535 "version, while the single cylinder, in its 500 version, is shared between the Bullet Standard already tested on the Den and the Classic, the latter being duplicated in matt and chrome versions. Each of these models is available in three colors: that makes 15 different versions within the range. For this test, we therefore rode a Classic "Santal" and a Classic Chrome "british racing green ", this last variation having recently appeared in the color chart.

Fashion is retro and the Royal Enfield has not had to be trodden since it has never really been modern, well in appearance, since the arrival of the EFI generations has nonetheless constituted a considerable technological break with the ‘arrival of an engine block, always long stroke, tumbled and air-cooled, but in aluminum and injected. The packaging, on the other hand, evolved smoothly, with points of detail making it possible to embellish the whole, in terms of finish and colors. In this rather neat environment, the way the injection appears is a bit rough (and it’s different on a Standard Bullet, which doesn’t have the same side covers). 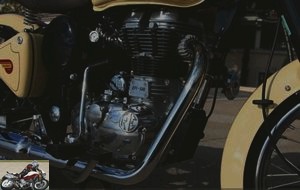 The Royal Enfield Classic is therefore a compact and deliciously vintage machine, whether in its painted or chrome version, between the simple engine and majestically raised to the sky, the many chrome touches (wheels, exhausts), not to mention the Classic version. Chrome that could create an illusion in a motorcycle museum, with its generous chrome mudguards and its captivating tank! For the rest, we note that the dashboard, from one vintage to another, evolves in detail (design, graduations, lighting), but that a partial totalizer or a digital window are still not relevant. . Modernism has limits, no, but ! 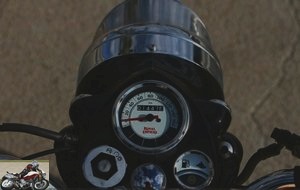 Compared to the Standard version tested on the Den, the Classic presents subtle differences in ergonomics. If the front wheel remains 19 inches, the rear wheel of the Classic is 18 inches instead of 19 and the entire rear part (mudguard) changes, as well as the saddle and its anchor. Instead of a one-piece two-seater saddle, the Classic models therefore have a single-seater saddle placed on two springs, in the old fashioned way! The duo is therefore optional and various saddles are available for the passenger, either at your dealership or at an English specialist such as Hitchcock who offers absolutely everything an old or modern Royal Enfield may need.. 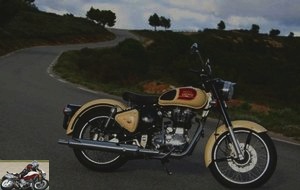 In short. The shape of the tank is also different between the Bullet and the Classic, the driving position is very slightly changing, without the fundamentals being called into question: the accessibility of this machine and its ease of handling are qualities striking, while never the 187 kilos of are felt. This is the advantage of this type of engine where most of the weight is concentrated in the crankshaft, which must therefore roughly represent the center of gravity..

For the rest, the Royal Enfield Classic is a machine of astonishing simplicity. No frills pollute your mind: a simple engine, a simple and elegant line and basta !

If you are a loyal reader, you have seen that in recent tests (Mash 400 Adventure and SWM 440 Gran Turismo), we explain to you that large single cylinders are not intended to be flexible at low speeds. In this mechanical world of ruthless laws, the Royal Enfield is however a delightful exception. Its long-stroke single-cylinder (84 x 90 mm) with two valves is not too reluctant to frequent low revs, from where it sets off again in a deep "broap broap" wriggling the butt. Do not abuse the under-rev too much, the low-engine will end up not appreciating too much, but the window of fire is clearly more accommodating with the handlebars of the Royal Enfield than of the two aforementioned machines.. 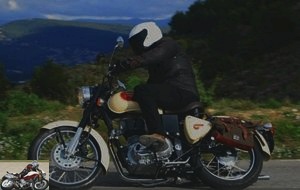 Suddenly, knowing that the throttle and clutch controls are smooth and very easily dosed, that the gearbox is very easy to navigate, with an easy to find neutral point and that the machine starts again without flinching on a stroke of the piston in 3rd at 30 km / h, you have a perfect machine for urban use, especially as its soft and not very aggressive sound helps to give it an extremely strong sympathy capital. Each stop is often conducive to initiating conversations with the curious or nostalgic, the Royal Enfield brand being the oldest in the world in activity, it is nevertheless relatively well known to the biker world and even to the general public. In terms of practicality, a small side bag like the one fitted to the Test Sandalwood can accommodate an anti-theft device. The steering lock is done on the column, with the ignition key.

We’re not going to lie to you: the Royal Enfield Classic is dragging its feet. Certainly, but she does it divinely well. So if you are addicted to express averages, just go your way. If, on the other hand, you have the luxury, because it is one, to be able to offer yourself the time to live, then you will look at it differently..

The Royal Enfield Classic must be able to come close to 130 km / h chrono, but the tumbled single cylinder will not appreciate the treatment for long. On the main axes, it will hold a 90/100 km / h cruising indefinitely, which is, we agree, quite low (and at these speeds, the concepts of wind protection, comfort or stability are sweep with the back of the hand). All the more reason to have to choose your route and go where the grass is really greener. 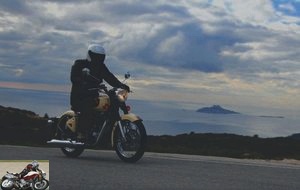 The rather low center of gravity, the remarkable handling, the good-natured and torquey character of the gromono are part of this good-natured personality which makes the Royal Enfield Classic so endearing on the secondary network. Shift into fifth gear from 70 km / h and let yourself be towed while enjoying the scenery, with sufficient engine braking to slow you down as you approach bends. The Royal Enfield is perfect for bikers who still know how to appreciate the motorcycle for the placid and contemplative emotions that it can distill without generating the slightest frustration in view of the low hourly average achieved. 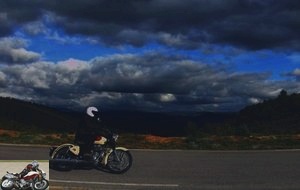 Not that the Royal Enfield cannot, in its own way, maintain a slightly more lively pace. Because its chassis is healthy and if the ground clearance was not limited (less than on a custom, all the same, but brake pedal, center stand and exhaust end up rubbing), it still allows you to have fun in the turns. Finally, braking is correct and in line with performance.

There too, only classic! A single-cradle tubular frame, a conventional fork (35mm diameter and 130mm travel) and two rear shocks (80mm travel). But this is perfectly consistent with the philosophy and performance of the machine. 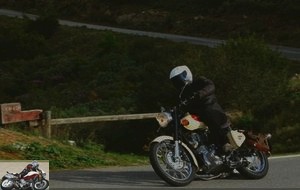 In a few weeks the Royal Enfield Euro 4 will arrive with ABS and two disc brakes. In the meantime, we still have to do with a simple 280 mm disc at the front clamped by a 2-piston caliper, assisted by a 153 mm drum at the front. The few who would complain about a possible lack of braking power did not understand the philosophy of the machine. Because in addition, the engine brake is not negligible.

The duo being optional (but the passenger footrests as standard), it will therefore be necessary to invest in a saddle to enjoy the Royal Enfield for two. “Rider” style saddle or piece of foam placed on the passenger fender, to each his own style. For the rider, the saddle is wide enough and the two springs provide extra comfort. As far as I’m concerned, having done more than 12,000 kilometers in a Royal Enfield Bullet, I find that the two-seater one-piece saddle of the latter is a bit more comfortable, even if it does not matter much. Question of feeling or of habit, maybe. 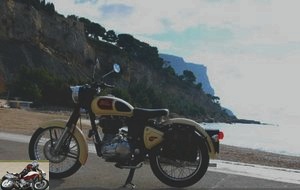 With its 14.5 liters in the tank, a Royal Enfield is a pure road since in most cases, its consumption will remain contained between 3 and 4 liters per hundred kilometers. 350 kilometers of range is therefore a minimum and operating costs remain contained, which is never bad news. A fuel warning light on the instrument panel comes on when there are only 4 liters left in the tank. If it does not drive very fast, a Royal Enfield can therefore drive for a long time..

Since it seems "we can no longer ride!", It seems obvious that more and more motorcyclists are choosing different machines, which allow to fully enjoy the joys of the road while avoiding the hassle of radars and other increasingly repressive means. Admittedly, performance is objectively limited and the Royal Enfield cannot claim absolute versatility that, moreover, it is far from putting forward. But for a stressed-out everyday life, for relaxed little walks, or even for long journeys off the beaten track, this Royal Enfield Classic is a reasonable epicurean choice, since the use and maintenance budget will remain modest, while that the charm of this machine and the old-fashioned, but endearing sensations that it knows so well how to distil can constitute in themselves a purchase motivation.

In a few weeks, the Euro 4 models will be in concession. We will then offer you a further test to gauge the effects of Euro 4 injection as well as ABS.. 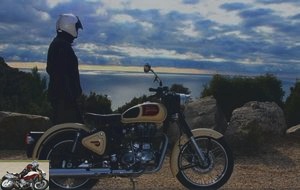 The technical sheet of the Royal Enfield Classic