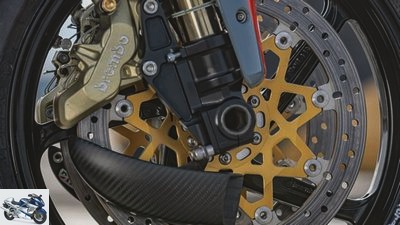 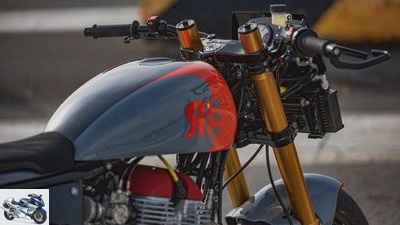 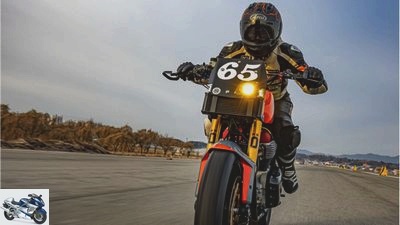 1/7
The Crazy Garage is to build a racetrack bike on behalf of Royal Enfield.

4/7
The oil cooler moves under the cockpit in the style of the AMA Superbike.

5/7
The tank isn’t one. The fuel supply is now under the seat. 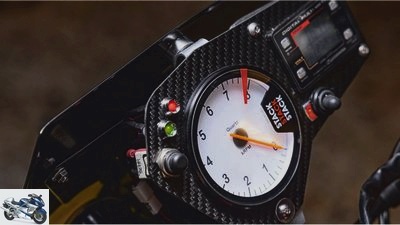 6/7
An analog tachometer and a small LCD display provide information about the most necessary.

7/7
The Brembo system sits on an adapted Ohlins fork.

Royal Enfield steps on the gas with customizing. The latest work is a Continental GT 650 superbike from Crazy Garage in South Korea.

In Europe is Royal Enfield one of many and one of the little ones. In India there is no way around the brand, which has been producing continuously since 1901. Happy Birthday to 120 motorcycle years. Appropriate play money is available to set up a motorcycle to mostly Asian customizers and say: “Do it”.

The Crazy Garage from South Korea takes one Continental GT 650 and builds a fierce superbike from the tame Modern Classic model. The eye-catcher at the Royal Racefield baptized conversion is the single-sided swing arm: It comes from a Honda VFR 400 R and is now supported centrally on the adapted tubular frame via a TTX strut from Ohlins. Likewise Swedish springs and dampens the front by means of a 43 USD fork with axially mounted Brembo saddles. The ABS-free Brembo system pressurizes an adjustable RCS pump from the same company. An aluminum rim from Marchesini now rotates in the fork in 17 inches. The front wheel is thus similar to the original VFR rim at the rear. Both are covered with semislicks from Metzeler. 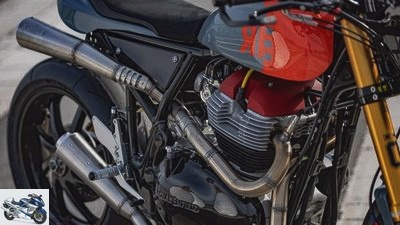 The engine of the 650 Enfield develops a good 47 hp from 648 cubic meters in series. The Crazy Garage recognizes the conflict of objectives with a pure racing motorcycle and looks for more power. The classic engine tuning should bring. The Crazy Garage from the S&S Cycles from the USA high compression pistons and sharp camshafts. The compression increases from 9.5 to 11.0: 1 and the valves continue to open and stay open longer. Together with a double-barreled exhaust system in GP-style, the missing air filter and the tuning via Power Commander, the unnamed but guaranteed gallop more horses than before.

The injection is now supplied with combustibles from the tank under the seat. Nine liters of fuel are available. What looks like a tank is just a sheet metal bubble – a pretty one instead. The USD fork is attached to the steering head in adapted triple clamps of a Ducati. Handlebar stubs with the look and length of a superbike handlebar give control over the Royal Enfield. The cockpit is minimalist: an analog tachometer dominates, a small LC display provides information, two LEDs warn in the last instance. At the front there is an AMA Superbike number plate with recessed projection headlights and the oil cooler below.

Surprise 1: The Royal Enfield Continental GT 650 inspired a superbike. Surprise 2: S&S Cycles a lot of tuning material for the Enfield. Surprise 3: Royal Enfield has been building motorcycles continuously for 120 years. No surprise: a Crazy Garage customizer does something really crazy: The Royal Racefield.