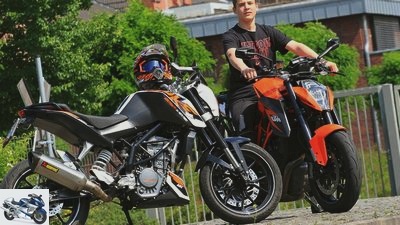 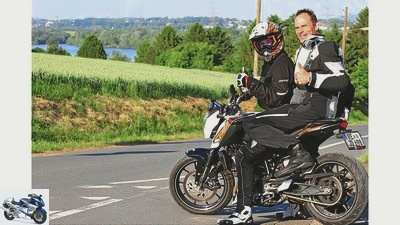 1/13
Author Markus Biebricher as a passenger on Julian’s 125 Duke. He had brought the big 1290 especially with him. 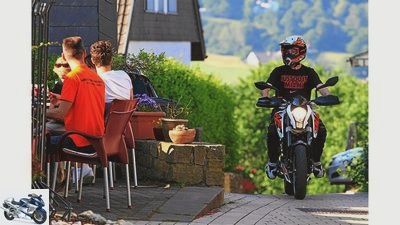 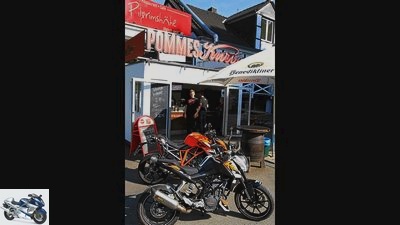 3/13
Break at the “French fries curve”: Wittener Strasse near Blankenstein. 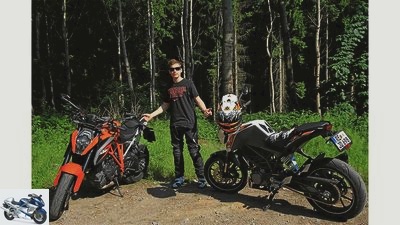 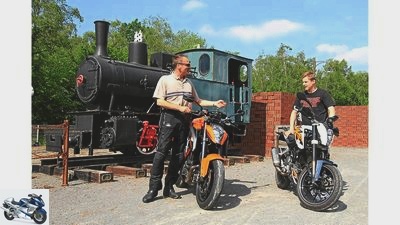 5/13
Exchange of experiences at the Nachtigall colliery. 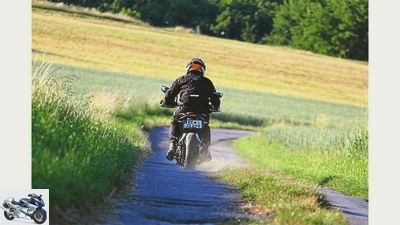 6/13
And he uses every opportunity for dynamic driving. 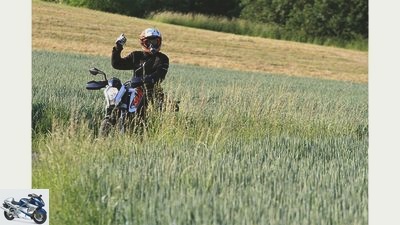 7/13
He drives 25 km to school every day and also enjoys riding his bike in his free time. 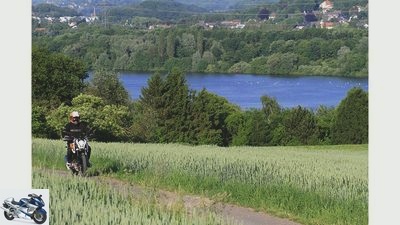 8/13
Especially if you know the routes around Dortmund well – and Julian does. 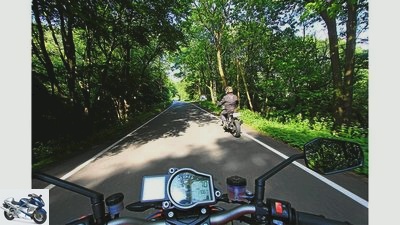 9/13
In terms of performance, of course, the small Duke cannot keep up with ten times the displacement of the 1290, but you can still travel quickly with it. 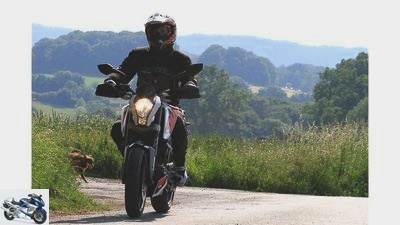 10/13
And that he also enjoys it, you can clearly see from his riding style and feeling for the bike. 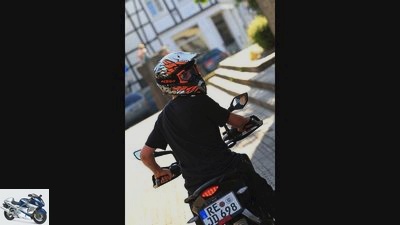 11/13
For now, however, he still has to be content with his light motorcycle. 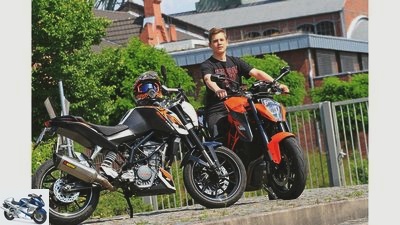 12/13
But Julian also made friends with her very soon. “Fits like a glove”, he lets us know. 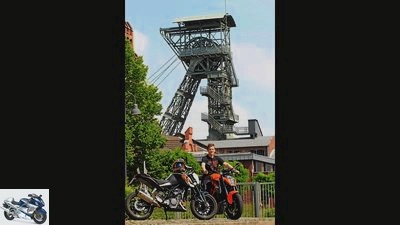 13/13
Many KTM riders are naturally cool. Says Biebricher on his 1290 Super Duke after getting it back from Julian.

In MOTORRAD 7/2014 we reported about Julian Drees and his greatest wish: a KTM Duke 125. The now 17-year-old has already covered 6000 kilometers on his KTM. We accompany him on a trip to the Ruhr area and ensure a new dream.

Julian had it with every fiber KTM Duke 125 desired. He had looked at it and configured it a thousand times on the Internet. How on earth could he get the 4,500 euros for his dream bike? When Julian finally turned 16 in June 2014, the Ride Thorn 50 SM, the weak-chested supermoto moped that he had been longing for when he was 15, had to leave the farm very quickly. A school job here, a family cash injection there – at some point the A1 driver’s license has been passed and the KTM in Julian’s favorite colors is just around the corner. From now on, the youngster is at home less often, shifting part of his beloved sports program to the new machine. Now he benefits from his iron martial arts training and his competence on dirt and mountain bikes.

As we reported in MOTORRAD 7/2014, Julian is a “completely normal, sports-loving boy who listens to old-school rap, has nothing against a game of Playstation and goes to parties”. And it is a prime example of how intensely young people are taking up the topic of motorcycles again. Two-wheelers determined Julian’s life from the beginning: he rode his bike before he could walk, honed his driving skills, pushed his limits fearlessly with commitment and ambition.

This is how it works now with the KTM Duke 125. Julian drives the almost 25 kilometers from his home in Datteln in the northern Ruhr area to his school in Wanne-Eickel and back every day. In wind and weather. In addition, he meets with other 125cc pilots for joint trips and training on dirt roads. Here he works on his driving skills as often as possible. Wheelies? Also go with 15 hp. Stoppies and drifts anyway. The not exactly lush power reserves of the eight-liter engine ensure a smooth driving style and the ability to take a lot of speed into the curve. Julian trains gaze guidance and ideal line search. Father Michael: “The boy lives the motorcycle theme.”

All reviews and articles about the KTM Duke 125

We bring a KTM to the date for a joint tour through the Ruhr area 1290 Super Duke R with – the “high-end” of the Duke family. It’s not fair, because this bolide is not designed to weaken Julian’s rampant KTM virus. It’s like holding a sausage to a dog or a carrot to a rabbit and then pulling it away. But Julian remains outwardly cool, even if the orange 180-horsepower bullet visibly pulls on his nerves. He asks suspicious questions about the A2 and the open A driver’s license, father Michael suspects what is coming.

When we leave Datteln and cruise along country roads towards Dortmund, it becomes clear that the little KTM Duke 125 is no brake for the 1290s. Yes, it doesn’t even look much smaller than the extremely tightly cut “big one”. Julian drove his previous dream bike confidently, within the legally possible tempos he can hardly be left behind. Sonor sounds the Akrapovic, which, like other gimmicks, absolutely had to be attached to the KTM Duke 125.

The 17-year-old always keeps the small engine in the range of the optimal torque, looks damn hardy for his age. You can feel his feeling for the machine and that he knows how to assess the limits of the chassis and brakes with an astonishingly well-developed “popometer”. All of these are systems for good and, above all, safe driving.

We stop at the Zeche Zollern in the west of Dortmund (www.lwl.org). This “castle of work” is one of the outstanding monuments of industrial culture in the Ruhr area. The hard coal conveyor system built in the baroque style demands respect from us. Julian’s respect for the “big” KTM is comparatively low. He sits down on the 1290 fire chair to try it out and says: “If everything fits like a glove, you could drive off immediately.”

KTM Duke 390 not an issue for Julian

Father Michael, who followed in the Z3 convertible, sighs audibly. Our next destination is the Nachtigall colliery directly on the Ruhr near Witten. In the impressive adventure museum, the difficult working conditions of the miners of the 19th century can be studied. Julian has studied KTM’s list of accessories, he makes suggestions on how the 1290s could be optically improved (“The long number plate rump must go …”). Then we drive through the Muttental to Elfringhauser Switzerland. Curves and steep passages like in a real Alpine country. Julian knows how to be fast: let it run, drive around, brake little, diagonally around the corner, open early. On the way back we stop hungry at the well-known “French fries curve” on Wittener Strasse in the direction of Hattingen’s old town.

“I could stop at the 690 on the way to the 1290. Can you throttle that for the A2 to 48 hp? ”You can. The 390 is not an issue for Julian. Father Michael speaks of high school graduation, Julian of his new dream: 690 Duke. The seeds are sown, we are sticking to our bearer of hope.

All tests and articles about the KTM 390 Duke

All tests and articles about the KTM Duke 690