The 200 miles of Daytona are one of the legendary races where talented riders on the handlebars of equally legendary motorcycles have distinguished themselves. This is the case of Dick "Bugsy" Mann, one of the iconic figures of post-war American motorcycle sport, who passed away on April 17, 2021 at the age of 86.. During his 20-year racing career at the highest AMA level from 1955 to 1974, he personified the relentless struggle of an elegant and ingenious outsider who, like a fairy tale, has repeatedly finished by gaining victory. This was the case in 1970 and 1971 when he won twice in a row on the legendary 200 Miles of Daytona, riding a BSA 750 Rocket 3. And it is also the motorcycle with which he achieved this latest success in California. A start which is also an opportunity to celebrate both the pilot and his career and this exceptional bike. An essay that is as historical as it is mythical. 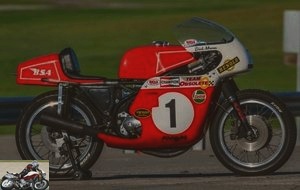 Riding a victorious mythical racing motorcycle is always a chance as much as a privilege. And you just have to be there in the right place at the right time for luck to smile. And this chance also presented itself on the fast track well adapted to the high revs of the motorcycle, the Canadian Tire Motorsport Park, Mosport for the close friends, on the occasion of the celebration of the 50th anniversary of the one and only Grand Prix of the Canada. It was in 1967, on the occasion of the country’s bicentenary. It was then necessary to realize two challenges, the first to relearn this rather intimidating circuit on which I had not driven since the Canadian round of the WorldSBK in 1990 and the second to rediscover one of the most moving machines in the history of racing. on the road. 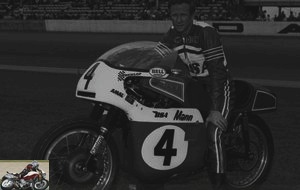 I had an asset in my pocket to assess the value of Mann’s motorcycle. I have indeed owned a pair of BSA F750s. And I notably had the factory version with a Rob North frame with which I raced in the mid-80s on TT Formula 1 World Championship events such as Vila Real in Portugal or the Tourist Trophy, as well as on the TT race. British GP F1 at Silverstone. 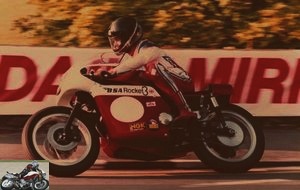 Alan on the Rocket 3 during the 1984 Tourist Trophy practice

It also reminded me of the 1994 Historic Formula 750 race at Daytona, when I spent 10 laps on my green-framed Ducati 750SS wrestling with living legend Yvon DuHamel on that same bike. I remember following the BSA-3 on the Tri-Oval turn before taking advantage of the superior braking of the Italian motorcycle’s Brembo cast iron discs and their Lockheed calipers to catch Yvon under braking in turn 1, before being picked up again to the acceleration in the Horseshoe by the British triple with the racing frame and the lighter crankshaft which allowed to go up more quickly in the turns than my bigger and more torquey V-Twin desmo. We had to swap places at least a dozen times at the head of this race which remains one of my best memories. But we both knew it was going to come down to a tactical duel on the final round. And that’s exactly how it happened, none of them wanting to go into the lead in the Chicane, except that I had an expert to face and he pushed me to do that. By accelerating the Ducati’s engine hard at the exit to try to get ahead, I almost succeeded, except that as we got closer to the finish line, I heard on my left the howl of the cursed three-legged Englishman getting louder and louder, until his front wheel passed mine a few hundred yards from the finish to claim the victory. I learned the art of aspiration from a real expert and maybe second place was not so bad under such circumstances. 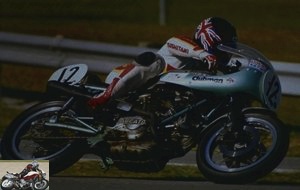 In developing the T150 OHV inline three-cylinder for its AMA road racing debut in 1970, Doug Hele and his men in Meriden’s racing department built on their experience with the company’s 500-twin, which had won twice at Daytona in 1966 and 67 and had shown good things in GP 500. The stock three-cylinder 741 cm3 (67 x 70 mm) here essentially consisted of the addition of an additional cylinder on the right side of Triumph’s OHV twin. 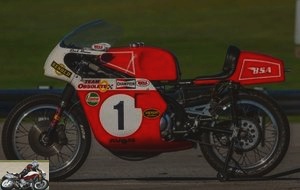 As a first step, they pushed the engine’s capacity from 741 to 765 cc as permitted by AMA regulations via a maximum overbore of 0.04 inches, which in theory allowed a damaged cylinder to be pierced and reused. This involved revising the steel liner to 68 x 70mm to accommodate the 11: 1 high compression molded pistons mounted on aluminum connecting rods with a steel cap. These were mounted on a carefully lightened 120-degree crankshaft, with the original chain primary drive retained, combined with a close-ratio five-speed Quaife gearbox replacing the original 4-speed.. 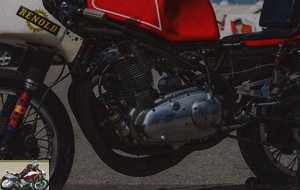 The TH6 cams first developed in 1968 for the 500G twin were used with larger radius rocker arms, stock cylinder heads fitted with stronger valve seats and adapted combustion chamber volumes. Three 30mm Amal GP single chamber split carburetors were initially chosen to provide more power at full throttle. Ignition was provided via a special Lucas system with an alternator feeding circuit breakers remotely without the need for a heavy battery and with the three coils mounted in a bracket adjacent to the distribution. The 3-into-1 exhaust system used a long megaphone measuring 100mm wide at the outlet, a system designed by Hele himself that resulted in 4-5 horsepower. The engine thus prepared then displayed 81 hp at 8,200 rpm at the crankshaft. 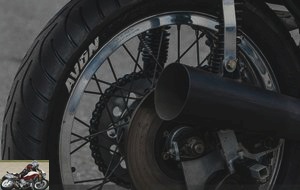 In this configuration, the three-legged delivers 81 horsepower

Frame maker Rob North was in charge of the design and manufacture of the frame at his workshop in Bedworth, 10 miles from the Triumph factory, based on a design previously created in collaboration with Triumph tester Percy Was. The resulting bronze-welded chrome-moly steel duplex frame was mated to a modified 33.3mm Triumph telescopic fork with integrated brake calipers. Due to an error with an inadvertently supplied prototype chassis component, the first set of North frames from 1970 featured a tighter caster angle of 26 °. In 1971 it was restored to 28 ° with a drag of 121 mm. Coupled with a steel swingarm and two Girling shocks, the wheelbase displayed 1,450 mm and a 50/50 distribution of the 180 kg without fuel. 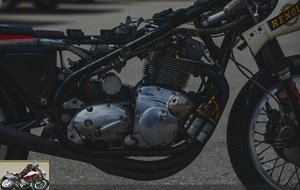 It is the specialist of the genre Rob North who took care of designing the frame.

In 1970, the motorcycles featured a 250mm 4-cam front magnesium drum and a single 254mm rear steel disc which turned out to be a part of the Triumph Herald car. For 71, the Fontana drum was replaced by two additional Lockheed discs and the fork crown was lowered by 51mm for better weight distribution..

It also reduced the frontal area to get more speed and widened the fork to make room for the disc brakes. The chassis has thus gained in weight, with 16 kg less on the scale. Early attempts to use Pagehilm aluminum rotors to reduce unsprung weight were aborted after cases of overheating under the hard braking typical of those found at Daytona. They were replaced with cast iron discs similar to the rear ones after Hailwood was lucky enough to survive a crash caused by this overheating. They were the first factory sports cars to use only disc brakes. Their rival Honda CR750 had a drum at the rear and the Benelli 250, pioneers in 1965, only wore one at the front.. 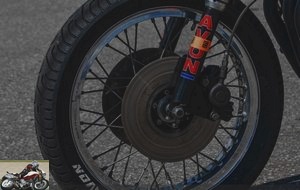 Besides the brake changes and the new frame, 1971 introduced further improvements to the engine and ignition to bring power to 84 horsepower at 8,500 rpm. The carburetors were replaced by 30mm Amal Mk1 rebored by Team Obsolete to 31mm on Mann’s bike. We also noted the presence of titanium wheel hubs. Titanium was not legal here, but with iron brackets fitted inside, the hubs passed WADA’s inspections which then consisted of fitting a magnet…. 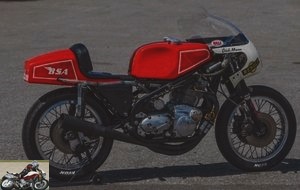 Anyone who has had the chance to ride a racing Rocket 3 cannot forget the experience and especially how melodic this wonderful exhaust note is, both from the saddle and from the edge of the track, especially if the 3- exhaust. in-1 is without mufflers like here. Riding the Mann BSA at Mosport brought back memories. Getting on board does require some contortion, however, as as with all Rob North-framed motorcycles, the footrests on this almost identical Wenco chassis are very high. Once in place we discover that the seat is finally quite low and the knees very bent. Comfortable, she certainly isn’t. 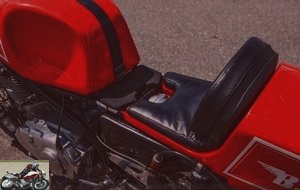 You feel a bit stuck in place, as I remember on my own motorcycles, with this big Daytona tank with two caps on which your chest rests while you try to hide your helmet behind the bubble at the looking for the little speed that still remains to be gained from this engine. Put those knees behind the flat fairing and ask yourself why you haven’t removed those unnecessary sliders to ride this bike while reveling in the haunting, but heavenly howl of the open megaphone as you push the three. paws on each gear until the Kr counteröber displays the ideal 7,800 rpm for the gear change. So savor the way it drops an octave or two when you step up a gear with a right kick. Heaven ! 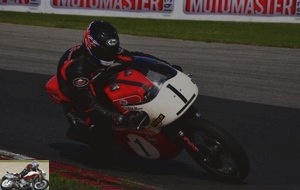 This factory spec engine feels longer in revs and not as crisp as the faster of my two Rocket 3s, but with more torque at mid-range, which makes it worthwhile to crank it up in revs. However, it is also more flexible and tolerant with linear power from 4,000 rpm and just a little roughness around 5,000 rpm. But it has more maximum power, so even changing gears at 7,800 rpm I’m still in the upper end of the power range, thanks to the tightly tuned gears on Team Obsolete’s Quaife five-speed gearbox. This means that you can also let the revs go down quite low when exiting the Moss hairpin bend and be rewarded with a smooth and relentless recovery on the straight Mario Andretti. 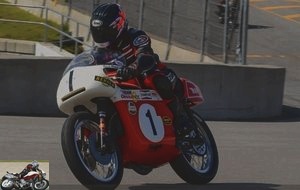 But it causes vibrations in the handlebars of the BSA at high revs, after the engine passes the 6,000 rpm mark. I remember that on my bikes I had installed thicker foam grips to combat this, because after a long race like in Vila Real or TT my hands were swollen from the vibrations. It’s a shame that Dick Man’s old motorcycle doesn’t have its famous white grips, I couldn’t wait to grab them ! 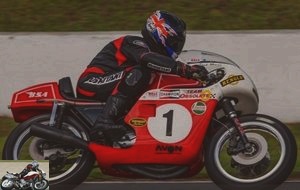 At high speed, the vibrations which go up in the handlebars are quickly annoying

The BSA engine looks incredibly modern for a vintage-era two-valve rocker arm, clean but torquey, fast and musical, with a completely linear power curve. Thus, even if it is very high at the maximum, it does not come at the expense of a hazardous diet lower. The BSA engine likes to run above 6,000 rpm, but it picks up cleanly in third at 5,000 out of the Quebec bend. And the way it takes its turns so easily betrays the work done to reduce the inertia within. Its ease of revving requires quickly engaging this gear lever to shift to a new gear.

The BSA / Triumph three-cylinder have rightly made history as the ultimate expression of old-school British racing engineering, before the advent of the Norton Rotaries and the next-generation Moto2 Triumphs. My dive into my memories provided by Dick Mann’s BSA Rocket 3 only confirmed this, with a characteristic high-pitched, but melodic accompaniment. Is this the best-sounding racing bike ever? Perhaps. This is certainly the case of a machine whose engine is derived from the series ! 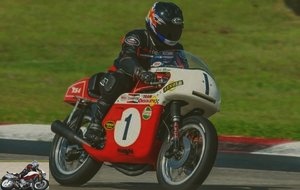