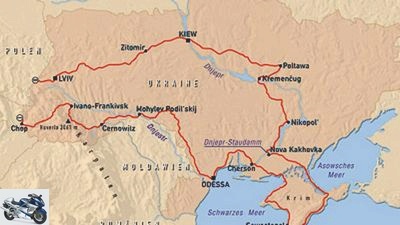 Ukraine
It has to be caviar

The plan to spend our next vacation in Ukraine met with a lot of incomprehension. Why go there and not France or Spain? A good question. To which there are many good answers.

The two ladies from the Ukrainian travel agency in Berlin scrutinize us indecisively while we fill out the visa applications. Your look reveals appreciation for our decision. But also concerns. ?? Can any of you speak Russian ??? ??No.??

Admittedly, we and our buddy Marc are quite nervous when we approach the Ukrainian barrier after a 1000 kilometer journey. For the first time we encounter the unfamiliar Cyrillic letters printed on the officers’ camouflage uniforms. Then everything goes very quickly. A border guard waves us past the line of cars and we receive an “express check-in”. After a few minutes we can enter.

Accompanied by curious looks, we start into the unknown. The small border town of Chop is an exchange office for us ?? and at the same time the place where we immediately make painful acquaintance with Ukrainian road conditions. Only through a wild slalom course can we avoid the many deep, water-filled potholes. A heavily drunk man lying in a puddle forces us to stop for the first time. We want to help. However, passers-by keep waving to us and indicating that everything is okay. With the freedom of the country road at the end of the village in mind, we overlook a track of rails running diagonally across the road. Practically at the same time, one of the two Honda and BMW’s front wheels slip away. The result: two crumbled windshields and a leaky valve cover on the boxer. We will have to approach the next 6000 kilometers more carefully.

Ukraine
It has to be caviar 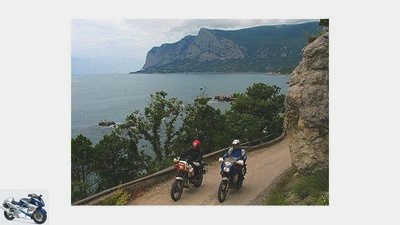 The drive along the rocky south coast of the Crimean peninsula offers great views of the Black Sea.

While we are straightening the fork of the Honda and helping the GS with liquid metal, a thunderstorm is approaching. So better turn back, back to the center of Chop. A hotel will be found there. But because of that. Until suddenly a car with a Viennese license plate stops next to us. We get to know Khalid, a perfume smuggler, and his friends. ?? I know everyone here. No problem!?? He’s driving ahead through the canyons with a bang, and five minutes later he’s booked a place to stay at the train station for the three damaged motorcyclists. The motorbikes are accommodated by a friend who is a security guard in the luggage storage area. We speed across the platform and the mopeds disappear into the luggage shed until the next morning. Then Khalid invites us to shashlik and always full glasses of vodka, and we talk about Hitler and Stalin half the night. Ukrainian hospitality that you can hardly resist.

The next morning, the last repairs are quickly done, and we set our sights on our first destination: the Crimean peninsula, about 1000 kilometers away. In order to avoid larger wanderings in the Cyrillic forest of signs, we navigate by satellite. To do this, we drive the respective day’s stage with the mouse on a previously scanned map on the display of a laptop and transfer the waypoints of the route to the GPS receiver. Unfortunately, after a short time, the underlying map turns out to be too imprecise ?? At some intersections, orientation is not easy despite all the technical aids.

The path leads along the northern foothills of the Carpathian Mountains through Galicia. Finally we turn into the mountains, approach the Hoverla via suspension bridges and gravel roads, at 2061 meters the highest mountain in the Northern Carpathians. Gorges dug by raging rivers, extensive forests, romantic villages with wooden houses and wooden churches characterize the landscape of this unique region in the geographic center of Europe. 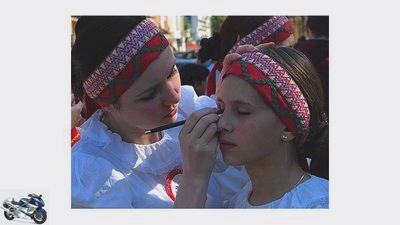 Young girls from Odessa put on make-up for a folklore performance.

Heading for the Crimea, we cross extensive, fertile hilly landscapes along the Dniester and the Moldavian border. In Mohylev Podilškiy we try to find a bed for the night. We pull out one of our handwritten index cards with the most important phrases ?? ?? We are looking for accommodation ??. The method works. With hands and feet, passers-by explain to us that the ?? Olymp ?? would be. A short time later, we are the only guests to check in; the machines are allowed to spend the night in the corridor in front of our room.

The next day they suddenly stand on the side of the road: Ukrainian policemen. We had heard a lot about them, and gloomy stories adorn practically every travelogue. And now they wave us out. Engine off, show documents. A policeman holds the laser pistol under our noses. Instead of the allowed 50 km / h there are 98 on it. We’re in a big mess! Rag off? Motorcycles confiscated? None of that. It remains with a friendly admonition and the astonished question of where we are going. Then the officials wish us a safe journey. No exception, as it should show: we will be stopped a further 25 times during the journey, a penalty of six euros is due only twice.

Odessa comes in sight. This vibrant city, whose famous staircase and landmarks were featured in the movie? Battleship Potjemkin? gained worldwide fame, was only built in 1794. We enjoy the hustle and bustle in the shady places, watch the many chess players in the parks. Vlad, the president of the first motorcycle club in Odessa, resides in a deep, dark bunker on the outskirts of the city. He is the last and only member and wants to be photographed by us with kitty and motorcycle in front of the largest stone Lenin in the city. Then we follow his black Urals to the heavy steel door of his old bunker. 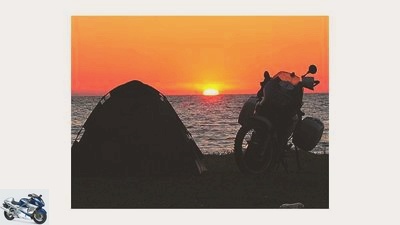 Sunrise on the broad Dnieper.

Vlad leads the way through the metal doors into the darkness of the interior. The contours of a workshop can be seen. Lightning flashes through the dark? It is welded on strange two- and four-wheeled structures, which one day should be awakened to new life. A bar, a stage and a striptease cage stand out in the stroboscopic light of the welders. In the meantime, Vlad has taken the presidential chair of the Strangers. made comfortable. If we need help, he will be our man, he assures us when we say goodbye. After half a day’s drive, we finally arrived in the Crimea. The bays are rich in fish and the soil is fertile. Fruits, caviar and dried fish are sold everywhere on the streets. Only in the south of the peninsula do mountains appear. A winding route leads to Sevastopol, the base of the once mighty Black Sea fleet. Today the port, which is towered over by a monumental marine monument, is nothing more than a junkyard. Warships are rusting everywhere in the widely branched bays, and submarines are already covered with algae. The only pleasant sight on a harbor tour are jumping dolphins.

On the east coast of the southern tip, the Crimea presents itself from an extremely attractive side: the rock walls drop up to 1500 meters steeply to the shore and only leave a narrow strip to build villages. The most famous of these elongated settlements is Yalta. In many bends the road winds down to the Mediterranean-style Promende, the cypress groves and the historic villas of the city, which is still a popular holiday destination for wealthy Russians. And of course the name Yalta stands for the conference that shaped the history of the 20th century like no other. The big three, Stalin, Roosevelt and Churchill, negotiated here in February 1945 about the redivision of the world.

After four days of culture, we are looking forward to an approximately 150-kilometer off-road route along the Sea of ​​Azov …

Horror stories make the rounds as soon as the Ukraine is mentioned. The reality is different ?? In fact, you can travel in this country without any worries.

General
Ukraine travelers are unlikely to meet other tourists? the reputation of the country is too bad to be considered a general travel destination. The experiences of the authors of this report, on the other hand, have been extremely positive. They were particularly impressed by the extremely warm hospitality of the population. The only problem: communication, as hardly anyone speaks German or English ?? and very few travelers have mastered the Russian language. The authors had good experience with index cards made before the trip on which the most important idioms were noted.

Arrival / general
If you want to travel to Ukraine, you have to accept a long journey. From Berlin through Poland to the Ukrainian border there are around 1200 kilometers. The journey from Munich through Austria, Hungary and Slovakia is roughly the same. The Ukrainian police carry out numerous speed controls (especially at intersections). So be sure to pay attention to the permitted speed (80 km / h applies on country roads). In the event of any controls, you should always be friendly? and stubbornly pretend not to understand what it is about. Due to the language difficulties, you can usually drive on quickly. And be careful: there is a strict ban on alcohol in traffic.

Travel time
The climate in Ukraine hardly differs from ours. The best time for a motorcycle trip is from spring to autumn.

Documents
A valid passport and a visa are absolutely necessary, which can be applied for at the Berlin travel agency “LAVRINOV”, phone 030/32606940, for example. When entering the country, you must take out Ukrainian health insurance for the duration of your stay, which costs from around 20 euros per month. A corresponding application can currently be obtained in Germany from the following Munich travel agencies: “Safe Travel GmbH”, phone 089/84140072, “Reiseburo Kraft Travel”, phone 089/51099690, as well as from “AXA Service Center Bohm”, phone 089/51262305. A green insurance card must be available for the vehicle. It is advisable to have photocopies of all documents and an ADAC protection letter with you.

accommodation
Unfortunately, hotels and guesthouses are not always immediately recognizable as such or can be found without any problems. The best way to get there is by a local taxi driver. However, you should be prepared for simple hygienic conditions. But the prices are low: a night in a hotel costs around ten euros. Always park the motorcycle in a guarded parking lot in cities. Wild camping is possible anywhere in the country.

Bless you
A first-aid kit belongs in your luggage. In the summer months, especially in the southern areas of Ukraine, cholera must be expected. There is also a constant risk of intestinal infection. For this reason, do not drink tap water, only drinks from sealed bottles.

motorcycles
In principle, Ukraine can be traveled with any type of motorcycle. Enduros are the most comfortable, however, as the road conditions are often not the best. The petrol station network is very well developed along the main routes. A liter of gasoline costs only around 25 to 35 cents. To stay on the right course, it is worth memorizing at least a few Cyrillic letters. Satellite navigation can be of great help. Devices, digital maps and the corresponding software are available from Touratech, phone 07728/92790; www.touratech.de. Spare parts are hard to come by. However, you can very well rely on the talent of the local auto mechanics to improvise.

literature
The range of travel guides is extremely manageable. Probably the best choice at the moment: “Discovering the Ukraine” by Evelyn Scheer and Gerd Schmidt for 19.95 euros, ISBN 3-89794-038-8. Useful travel information can be found on the Internet at www.ukraine.com (but in English). The selection of good road maps is also limited. The Shell EuroCard from Marco Polo “GUS” with a scale of 1: 2,000,000, EUR 7.50, provides a good overview. The two papers »Ukraine South, Moldau and Crimea« and »Ukraine North / Central, Belarus and Russia« are from the same publisher, both on a scale of 1: 750,000. 7.50 euros each.