The Desmo of Mike Hailwood’s comeback

Most road racing enthusiasts will tell you that Mike Hailwood did not return to motorcycle racing after car racing. And that after leaving the world of Grand Prix in 1967, it was not until his return and his legendary victory in the Tourist Trophy of the Isle of Man in 1978. And that it was then the first time that he had driven a Ducati with V-Twin desmo. But none of this is true. 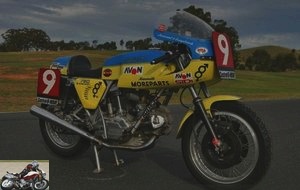 Mike the Bike is rightly remembered as one of the greatest legends in motorcycle sport. He is even for many the greatest pilot of all time. And we are celebrating a sad birthday this year, since he died just 40 years ago, on March 23, 1981. Two days earlier, Mike had taken his two children Michelle and David by car to go for a Fish & Chips. . On the way back, they were struck by a truck making a U-turn, in a place where it was forbidden to do so. Her son David survived with only a few minor injuries, but Michelle died instantly and her father died in hospital two days later.

It was less than two weeks before his 41st birthday and not even three years after his legendary return to motorcycle racing on June 3, 1978 when he won with record speed ahead of the Honda factory team in the TT Formula 1 in the handlebars of his Sports Motor Cycles Ducati 900. Legend has it that this return to competition took place eleven years after his last race on the British island – that’s right – and seven years after his last international motorcycle race . That is less the case. And the Moreparts Ducati 750SS now on permanent display in the collection of the local Motorcycling Australia (MA) federation is proof of this.. 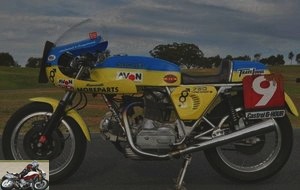 It’s not on a 900SS, but with a 750SS that Mike Hailwood has made his comeback

Because in October 1977, the year before his exploits on the Tourist Trophy, Hailwood joined forces with his Australian companion Jim Scaysbrook to drive a production Ducati 750SS in the Castrol 6 Hours at Amaroo Park, the most prestigious race in the world. Australia at the time, a decade before the arrival of the Grands Prix at Phillip Island. 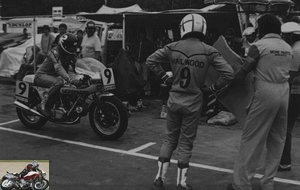 Scaysbrook to hand over to Hailwood at Amaroo Park

And yet, he had a right foot permanently damaged since his accident at the Nurburgring in 1974 at the wheel of a McLaren. This accident ended his promising 50-race career in Formula 1. But that year he proved he had lost none of his motorbike talent by allowing the duo to finish sixth in the overall standings and second. in the 750 class, just behind BMW factory rider Helmut Dahne on his R90S and ahead of New Zealand legend Graeme Crosby on a Kawasaki Z1 900. 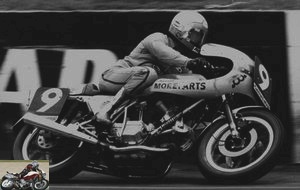 Mike Hailwood at the 1977 Castrol 6 Hours

Mike also raced two more times on the same motorbike belonging to the Moreparts motorcycle junkyard of New South Wales, winning a top ten with Scaysbrook at the Adelaide 3 Hours in March 1978, just three months before his TT victory . A little warm-up !

A Ducati 750SS Moreparts is suddenly a historic motorcycle, in more than one way. And when, Motorcycling Australia bought the motorcycle with chassis number DM750SS-076096 equipped with engine no. 075811, I had the opportunity to take the handlebars on the occasion of the Broadford Bike Bonanza. Sponsored by Honda, the event took place on the narrow track at the Victorian State Motorcycle Complex in north Melbourne. This is where the Ducati is now on permanent display in the MA museum.. 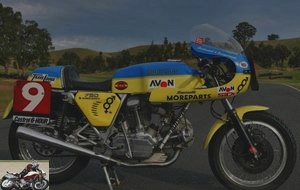 The 1977 race bike has been fully restored by Motorcycling Australia

This 750 SS is a real breath of nostalgia. And when I say that, it’s very personal, because I just started my racing career on this bike. Finally, my green and silver 750 SS was an early round-sump desmo V-Twin with a right-foot gear selector. Whereas this 1977 square-sided model had seen its selector shifted to the left, as required by Hailwood’s right foot. Otherwise, apart from the blue and yellow deco from sponsor Golden Breed, the two bikes were almost identical. MA even commissioned Ducati specialist Brook Henry to rebuild the engine of the Moreparts, the same man behind the Vee Two Australia motorcycles that gave me a platform for many victories in the 1990s when we raced together.. 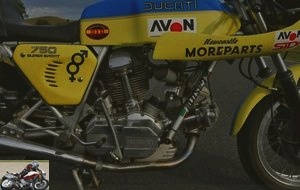 A few Broadford laps on the Moreparts 750SS gave me the same stretched riding position as on my own bike, but without my arms locking into the contoured hollow of the fiberglass tank sides. The Moreparts, more recent, in fact uses the same metal tank as that of the 900SS. 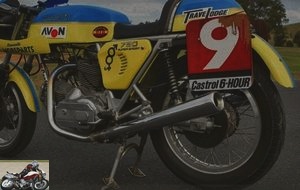 The original Conti double silencers of the 750SS

But it has the same torquey and vibration-free engine, delivering its power in a still linear manner with an additional revving of 7,200 rpm at 8,000 rpm, the same very precise 5-speed gearbox and the same rhythm. offbeat melody of the engine, expressed through the iconic Conti silencers. 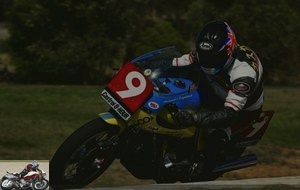 The twin is here capable of reaching 8,000 rpm

And that’s not all. The Ducati Moreparts has the same lazy, but controllable steering as my old bike that makes you look forward to the big bumpy curves where the Japanese four cylinders quickly struggle, but at the cost of having to prepare for its change of direction well in advance of because of the long wheelbase of 1,530 mm and the 29 ° caster angle of the 38 mm Marzocchi fork of very good quality (for the standards of the time). Perhaps also because of the dry weight of 180 kg, heavy enough for a V-Twin, the Ducati 750SSs have always been at home on rough roads when the art of suspension tuning and frame design was in the limelight. still little understood. The Moreparts are no exception, ignoring the Broadford Moguls with impunity. 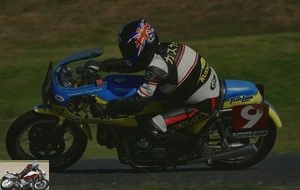 Although heavy, the 750SS is very precise and safe

The same benchmark braking power (for the time) is also present and correct thanks to the twin 278mm Scarab cast iron discs gripped by Brembo’s first-generation black dual-piston calipers. Although one must tighten them hard enough by modern standards to make them work, they stop the motorcycle properly. However, by adding the quality of the desmo engine brake, one obtains the possibility of overtaking the lighter and smaller motorcycles in tight corners..

Really, nothing braked quite as well as a Ducati back in the day thanks to that and the simple Lockheed 230mm rear disc. Better yet, they do not lose efficiency despite repeated braking in Broadford or Amaroo Park. You can also use a lot of engine braking because even making it hum at 7,500 rpm when downshifting it doesn’t dribble the rear wheel. And it’s rare enough to underline it, especially next to other engines of this type.

But it is still wiser to use only the rear brake strongly in a straight line to approach in a turn, then release the pressure on the lever to shift a gear lower when one arrives at the point of chord. There really is no need for a slip clutch on this bike ! 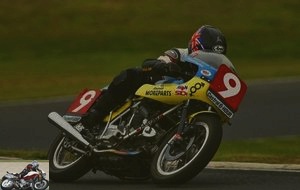 The braking of the Ducati, reference at the time, is still very effective

The Moreports 750 SS has the same dashboard I had back then with its pair of round dials separated by a trio of indicator lights that face you as you lie down behind the bubble of the protective mini fairing. We also see the black button of the steering damper attached to the triple triple tree upper, but that we have always left loose to avoid making the steering more heavy.. 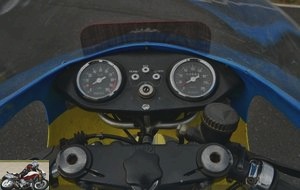 The speedometer still works as it should according to the Castrol 6 Hours rules. The 205 km / h displayed in the Broadford pit straight seems logical, in contrast to the 230 km / h displayed in the upper straight with the needle approaching the 7,500 rpm mark on the somewhat optimistic last report. My more generously prepared bike was finally flashed at only 224 km / h downhill at Highlander in the Production TT. 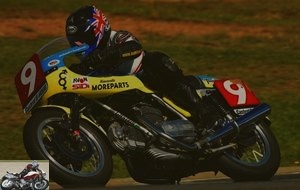 With 230 km / h, the meter is rather optimistic

However, the Ducati Moreparts 750SS unfortunately also has in common with my bike the one trait I could have done without, namely the ground clearance issues with those standard exhausts which led to the collection of dented Conti mufflers that I have. always somewhere in my garage. This is what led me to buy a second 750SS – yes I know why did I sell the first one ?! – in 1976, the year I competed in the Avon Production Championship in the UK. The Avon Production Championship is overall a copy of the Castrol 6 Hours rules without the stock exhausts, the regulations in which I was driving allowed the use of its Imola high silencers and a slight level of preparation, but also longer shocks which solved ground clearance problems. Not rubbing the front cylinder exhaust in right turns and rear in left turns, as well as the muffler fitting bolts is a constant concern on the Hailwood 750SS.. 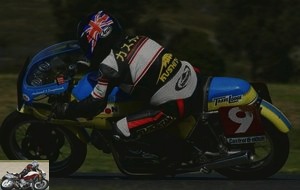 The Bridgestone Battlax BT45 tires now shod on the Moreparts bike provide more than enough grip for me to hear and feel the limit of the exhaust already rubbing on the asphalt. Wow, slow motion Alan! You can’t afford to spoil this glorious model of motorcycle history that has been so well overhauled by MA to present it to the current generation … So I did..

Mike Hailwood’s victory at the 1978 TT is rightly considered one of the greatest achievements in motorcycle racing history. And it is now rightly part of the folklore of our sport. But the Ducati Moreparts, which he drove at the antipodes in 1977, played a key role in this development. So after having driven the two Ducati Sports Motor Cycles on which he raced for his victorious comeback from 78 and his disappointing 5th place from 79, it is an honor to have been able to complete the treble. Thanks to MA for giving me the keys to do this. I’m glad I got her back to the track ! 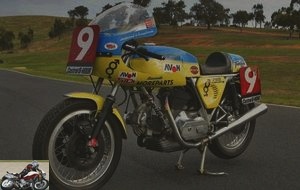 The technical sheet of the Ducati 750SS Moreparts