Mouse of the cities and the fields

If Suzuki was the first manufacturer to launch the largest of the scooters with the Burgman 650, declined with the 125 and the 400, one can wonder the usefulness of a 200 compared to the other existing displacements, especially for a price finally very close to the upper displacement. Why pay almost as much in the end for a less powerful and less statutory scooter? Test and response…

A 200 cc? To see it, the 200 at all of a 125 cm3 in terms of form and size … If there was not this logo 200 marked on the back. And indeed, the 200 has exactly the same size and chassis characteristics as the 125, between the wheelbase of 1465 mm or the seat height. However, the model benefits from the same evolutions in terms of look as its big brothers and their recent restyling with a modern, almost organic front face. A huge windshield rises high, to offer excellent protection. The saddle, on the other hand, is a 125 almost as wide as for the 400, a guarantee of comfort for both the rider and the passenger. The rear light elegantly underlines a scooter with modern lines but not too much, thus making it possible to please the greatest number, without a too marked look that can be tempting and cause theft. 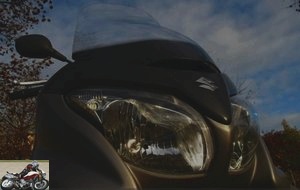 First surprise, at only 735mm (many scooters are closer to 800mm) the saddle is low and the feet touch the ground for the 1.70m rider, which is far from the case on the majority of scooters there. including 125, where one is often perched and just on tiptoe. To this is added a limited weight of only 160 kilos compared to the 220 kilos of a 400 cm3 or a 500 cm3. And these 40 to 60 kilos naturally make all the difference in terms of handling at low speed, because never unbalancing the pilot, even loaded with a passenger..

Placed low, the analog dashboard is very readable as is the digital screen offering a very clear fuel gauge as well as the most usual clock and partial double trip. Only the instantaneous consumption figure is a little less readable. Small peculiarity of the latest Suzuki models, an eco indicator indicates a smooth and fuel-efficient driving. And for that no need to drive under 50 km / h; it is enough just to avoid too strong accelerations. Proof, if any, the green light can quite come on at 110 km / h. And indeed, at this speed, consumption is almost the lowest. 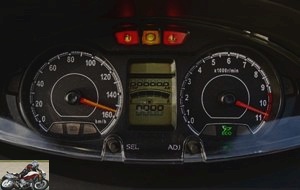 The hands rest naturally on the handlebars while the hands seem higher than usual, in particular due to the lower saddle.

Finally, there are storage spaces everywhere, between the side storage compartments and the huge horizontal storage compartment placed under the handlebars which is almost the entire width of the scooter at the front. The mirrors finally offer a good rear view and are easily adjusted, including while driving. 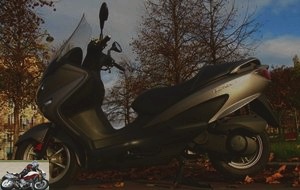 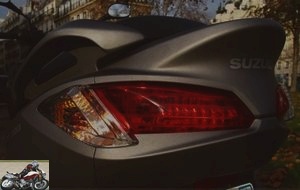 The starts are not soft, despite a slight latency which allows the mill to take its turns with a few tenths of a second between the action on the right handle and the real acceleration. But if you turn the handle hard, you even get a slight kick with real dynamics. And to lessen this kick, it is enough to be softer with the handle to have a smoother reaction and for as much sharper than a 125 cm3. Obviously between the 10-12 horsepower of a 125 cm3 and the 18.4 horsepower of the 200, there is almost double the power but also the torque (1.7 mkg against 1.1 mkg for the Burgman 125). Not to mention that the 200 has the same size and the same weight as the small 125 cm3 from which it is only separated by a kilogram. The weight / power ratio has therefore nothing to do and explains its overall fishing, even relative.

The mirrors are ideally placed in height. As a result, it is particularly easy to slip between lines of cars even close without touching anything. Its ability to squeeze is almost closer to that of a bicycle to manage to get into the slightest mouse hole, further aided by a featherweight and maneuverability that allow to consider without fear the maneuvers at very low speed, including almost at right angles between vehicles.

Practical, the warning placed on the right stalk is easily manipulated with the thumb. On some scooters, you have to look for it. Here, we switch it on naturally without taking our eyes off the road. 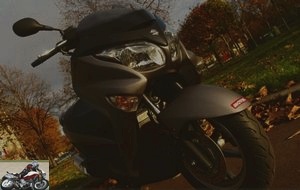 A 125 scooter often reaches the end of its capacity at around 100 or even 110 km / h and highways then become dangerous when you are overtaken by trucks. The 200 is still comfortable and with enough power under the grip at this speed to allow safe passing at 110 km / h. It even has a sufficient reach to reach 130 km / h, or even a few more kilometers an hour, well launched, even in duo. The advantage over a 125 cm3 is then obvious. The extra power makes it possible to really do peri-urban without fear or reproach, or even to consider a small trip to the sea. After all, the maximum speed of the 200 is identical to that of three wheels in 300 or 350 cm3. It is therefore not a sub-displacement. And in a straight line, solo or duo, the stability remains good, despite the light weight. The little extra is the eco light which is able to light up at 115 km / h at 6500 rpm. Like what eco is not reserved for low intermediate speeds. And indeed, at this rate, without acceleration or deceleration, consumption is 3.4 liters per hundred, the lowest possible consumption of the scooter..

The high windshield offers excellent protection, especially against bad weather. The other side of the coin is that it generates a noise gain in the headphones compared to a lower bubble.

At ease both in town and on the motorway, the Burgman is therefore naturally installed on small departmental roads, where you can drive naturally smoothly and in eco mode, or string together the virolos in a more dynamic way. This is where the scooter shows its limits, with a less rigid frame that begins to live a little and wiggle all the more as the driving wants to be nervous and aggressive in tight sequences. It is never dangerous, but it does not offer the same rigidity as the big brothers 400 and even less than that of the 650. On the other hand, as long as we drive normally, anticipating the curves and without rushing it, it is very pleasant and safe. It’s just not a sports scooter.

The first few meters on the scooter first give an impression of firmness. And a simple short drive around the block doesn’t make it one of the most comfortable on the market. But strangely, day after day, this feeling disappears. After a week, it is even found comfortable compared to many models, including 125. It is not flexible, but it is comfortable solo and even more in duet, when the suspensions are a little. more in constraint. In short, the passenger was delighted each time to climb behind, not to mention that unlike the 400 or 650, placed lower, she forgets herself for the driver, who does not feel the effect of swaying experienced on other models. . Suddenly, the duo in town and on the road is as pleasant as it is solo, with barely less recovery. Because with a 125cc, the times are really less good in duet than solo. The extra displacement of the 200 offers just what is needed more so that the difference is less obvious and with an additional driving comfort.. 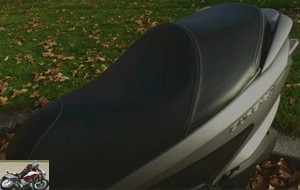 Braking on the 200 is identical to that of the 125 with a single 240mm disc both front and rear. Very oversized for the 125, it is even more than sufficient for the 200. It offers a good feeling and the necessary power, without exaggeration. But suddenly, its handling is really easier. 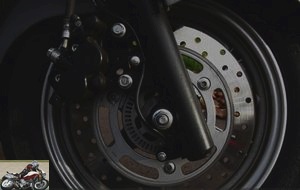 Consumption varies depending on driving! Great news ! In fact, the eco indicator and its little green leaf encourage driving by winding. Consumption in the city is then around 3.7 liters per hundred. It can still go down to 3.4 liters at maximum speed on the national road. Obviously, it can go above 4 liters per hundred with a nervous behavior. The five-stick gauge decrements by one stick every 50 km or so. And the scooter suddenly goes into reserve around 220 km, when the small gasoline pump flashes but while the last stick is still full. But with a well-filled 11-liter tank, the scooter allows a maximum theoretical range of 300 km (depending on driving).

The central fuel flap unlocks well. The cap can be removed completely. You just have to be careful to fill in, the difference can mean 20 to 30 km of difference in autonomy in the end, even though the gasoline is flush in both cases..

Tidying up ! This is undoubtedly the big strong point of this scooter which accepts to embark under the saddle two modular! Not just two integral but two modular ones like Shoei Neotec or Schubert C3 which are far from being the smallest helmets on the market. And there is still a little room for gloves or even rain pants. In the same way, it is really possible to go shopping (except for the water packs). In width, it is even possible to accommodate a hard folder in A3 format or a somewhat imposing laptop!

Beyond the space under the saddle, the storage compartments at the front offer additional storage for odds and ends, practical every day. 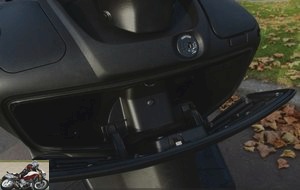 The scooter has a well-placed side stand that folds out and folds easily without looking or thinking about it. Better there is a central stand, knowing that the scooter is placed on it effortlessly. The central stand is also particularly useful insofar as the scooter does not have a parking brake. And even if the side stand is stable even on a slightly sloping sidewalk, it is not able to hold the scooter on a slope..

Light with its only 160 kilos, you can feel it especially when you push it to a standstill in the garage, which is easily done..

The Burgman 200 is the scooter of choice for urban use, even peri-urban for those looking for a comfortable two-wheeler, suitable for duos and above all practical with a high level of boarding and storage. It will just find its limit for the Parisian who wants to go for a weekend to the sea as a duo, with a top speed that will drop under 120km / h in slight odds compared to a 400 which could face it at 135 km / h. On the other hand, with a lower weight and greater maneuverability than the 400, it will be much more pleasant and easier on a daily basis for those who must use it 90% in large cities and suburbs (in Paris and the Paris region), including with a daily use of Paris suburbs. Last advantage, it will be less likely to suffer theft compared to larger displacements and therefore represents a guarantee of serenity, even parked in front of a station. In the end, it is the very example that there is not always a need for bigger to have better; the proof with this 200 cm3 with its unrecognized displacement and not recognized at its fair value. And at only a thousand euros more than a 125cc and 1500 euros less than the 400cc, it’s excellent value for money and a real safe choice for everyday life that will not disappoint..