So here I am at the handlebars of this song. It must be said, the DL1000,
is the same size as the Honda Varadero. Enormous ! And even though I
know full well that I am not a candidate for the purchase of such
machine, for at least 2 or even three reasons (I have not yet ?-
big trail spirit, I already tried a big twin
-VTR- and I did not like and the price), trying it is always
interesting and rewarding.

The seller starts the scramble, it’s the good big twin that
sets off with its 996 cm3. There is nothing very haunting about the noise
in this full-stock version, but when you buy this kind of
motorcycle, it is not to immediately modify the sound. 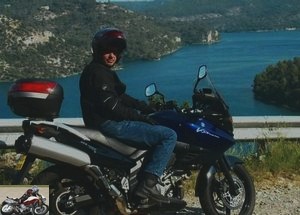 When stationary and once on the bike, pleasant first
feeling, strictly personal however, the height of the motorcycle is suitable
to my very long legs. Which is an advantage for
some is a disadvantage for others, small sizes do not
will not touch the feet on the ground as they would on a sports car, for
example.

The dashboard seems complete and perfectly readable with 2 partials,
a digital gauge, an engine temperature warning light. The
red zone is at 9500 laps. It remains to be seen whether the elongation
of this engine allows an interesting use of these
high speeds. The mirrors are square, on the handlebars.
Spread apart, they offer excellent visibility. The comodos
? There is nothing to say, there are the warnings.

I quickly make myself a test route: exit
from Toulon, direction Ollioules by motorway, Gorges d’Ollioules, path
to the Destal farm in St-Anne-d’Evenos, U-turn,
return to Olloules, highway and voila.
For those who do not know Toulon, it gives: exit from the
city, highway, crossing of a small village, virolos in all
kinds over a few kilometers, bumpy path (and not chaotic…
to your dictionaries!) in the hill, then back.

First turns of the wheel, the clutch is very soft, progressive.
The box is soft and precise. Reports pass clearly,
the neutral point is found immediately, without failure. The noise remains that
a big twin, closer to the tractor than to the mixer, with resonances
metallic. On the other hand, we perceive 2 additional sounds
quite painful in the long run whose origin I cannot explain
due to lack of experience but it is clear that a more experienced tester
could determine the origin of these extras in the cascade of
distribution, or alternator drive. So there is a
shrill but muffled whistle, which decreases in tone when
headlights instead of codes. The other noise is rather electric,
directly linked to the engine speed and which gives the impression
to have an electric motor. However, this cluster of technology is turning
like a clock without unpleasant vibrations.

The driving position is upright. Besides, it is better to stand
straight on this kind of motorcycle under penalty of looking like a toad
on a matchbox with a catastrophic style note.

The suspensions are flexible, and effectively erase irregularities
coating; I will have the opportunity to realize it later.
Here is the highway and the opportunity to talk about the 9 mkg of torque
then the 98 CV announced for 207 kg dry, estimated
personally at 235 kg all full facts. Gas.

Obviously, it grows! linearly
besides, but the needles go up without flinching, propelling me in
less time than it takes to tell at widely speeds
prohibited. And there, new approval: protection.
I-don’t-feel-anything. I’m almost 200 meters away and my meter
86 feels no pressure from speed, nothing. Comfort. You have to say
that the bubble is copiously drawn, not without elegance,
on this fork crown.

Exit Ollioules, hop! the brakes. I had the opportunity already
to test them a little firmly in town, showing a clear, progressive braking
also. But when you have a Bandit 600 with a braking system
original, do not all other motorcycles actually have braking
clean and progressive with the right amount of bite? everything is relative, don’t
let’s not forget that. In any case, on this motorway exit, braking supported,
nothing to say. The fork plunges anyway, because
its flexibility (I did not pay attention if it was adjustable).
But the end result provides a restful feeling of security.

Ollioules, a small village in the Var, with small streets, traffic
like a Saturday morning, the flexibility of the engine surprises. No need to hope
ride 2000 laps comfortably. At 1500, the engine becomes
irregular, jerks. At 2000, it’s better on a
stable speed, but the mechanics knocks on re-acceleration
and it would almost hurt in place of the engine. I remain however
surprised by its relative flexibility compared to the V-twin 650 of the SV whose
I seem to remind me of a less pleasant flexibility in these stockings
diets. At red lights, I put my feet on the ground with pleasure,
with this feeling of relaxing my legs, stretching them,
to stretch them. Handling is much better than this
what could augur the template, since wide handlebars, retro
in height and motorcycle "not that heavy".

Now, let’s approach the virolos of the gorges of Ollioules. The motorcycle wants to be
handy, docile, but it gives the impression of falling en masse on
angle, so there is nothing progressive there. However, she remains
stable and accepts course corrections without difficulty.
The virolos are all linked on the same report thanks to
to the torque and the extension of the twin from the TL 1000 S. I do not perceive
no pumping of the suspensions in strong curves and I
remains far from the limits of the motorcycle, I am convinced.
Note that the transmission accepts downshifts without any problem.
at high speeds, without locking the rear wheel,
unlike the SV 650.

The route finally provides for this clean country lane
to complete any suspensions a little tired.
The motorbike collects silently, without flinching. I am certainly a little roughed up
but everything is sorted out when I stand on the toe clips, my thighs
enclosing the large tank. For the sensitive soul, know
that I did not drive very quickly on this path, but rather
to the rhythm of the walk in the undergrowth. The return will be by the same
route or almost.

Pleasant engine behavior and full of resources, what
whatever the range of use. The suspensions are flexible and could
being too sporty driving to which health
of the engine prompts. Discreet, smooth, progressive 6 gearbox and clutch,
net. Upright driving position like an I allowed, even at
illegal speeds, thanks to a bubble fortunately
designed. Saddle height dissuasive for small riders. Chest
under the huge saddle, enough to put a chain and a "U"
as well as other elements.

A test carried out by JMQ