The heir to the legendary 50 Special

With 17 million units sold in 65 years, the Vespa has become a myth beyond the trendy scooter icon and ultimately ageless style. And with the fashion of vintage, it is more present than ever, in its various variations from the legendary PX to the most recent LX or S. The Vespa S in particular benefited in 2012 from a brand new 3-valve injection engine (ie) in its 125 cm3 version which brings it back to center stage, especially since it is the cheapest. Vespas at "only" 3,449 euros. Test… 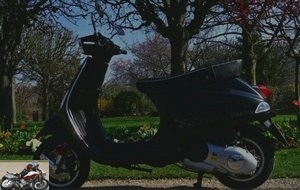 The inimitable line (or much imitated from the Vespa) is found in a typical way with the S model, which is characterized mainly in the range by its rectangular front headlight. 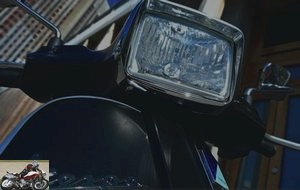 Otherwise, we find the typical Italian line, from the front fender, to the general curve and the rear rounded shape, not to mention the large rear light just as rectangular as the front headlight. The usual flat floor with its rubber bands confirms that we have a Vespa. 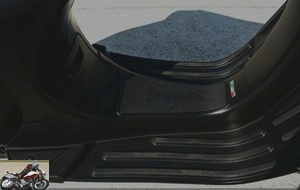 Inside is an air-cooled 4-stroke single-cylinder with three valves (2 for intake and 1 for exhaust). New crankshaft, new bore and stroke values, electronic injection with latest generation ECU, this is indeed a new engine, particularly reworked to optimize performance and reduce fuel consumption; 30% more economical compared to the previous generation. Note that it is produced in the Italian factory in Pontedera. 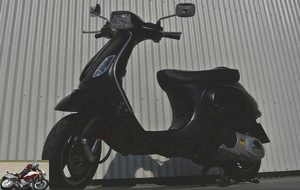 The 1.70m rider will just put his feet up on the ground, despite a saddle of only 785mm, but relatively wide. Fortunately, the almost featherweight of 100 kilos allows you to take the scooter in hand..

Under the eyes, we can see a minimalist plastic dashboard with analog meter, a gauge on the right and a clock. A single totalizer will make you regret a trip as often, even if the gauge is quite precise. 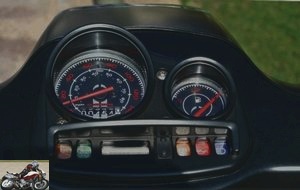 Small finishing detail, there are 3 stainless steel screws clearly visible around the meter, which deserve to be replaced by black screws, to better blend in with the fairing and the black color. It will be less obvious with the white color. 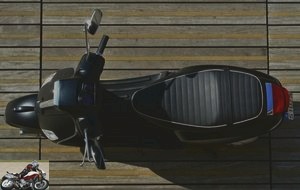 On the other hand, there is the large space at the front, behind the apron, which offers room for several positions of the legs and feet, depending on the mood.. 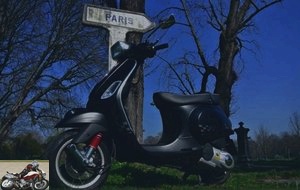 Crank the starter and the S snorts in a clear sound, slightly sensing the vibrations of the single cylinder. With the right grip on the throttle, the motor reacts instantly to launch the scooter quickly and forcefully. The first turns of the wheel are light, manoeuvrable, with a very light steering, reinforced by the very small wheels of respectively 10 and 11 inches. Perched higher than on a Fly but at the same height as a Sport, the lightness of the steering is almost surprising, before you get used to it very quickly. 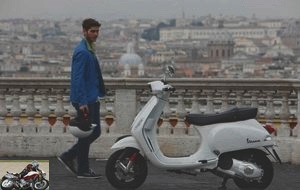 Dynamic, but not overdone, the S weaves its way happily between cars, especially since the mirrors, which are also well placed in height, are above the car mirrors. A little less maneuverable than the Fly and above all higher, the handling remains pleasant, especially since the protection is much better than that of the Fly, with a more encompassing apron protecting well from cold air flows. The very short turning diameter allows many eccentricities, without being worth the agility of the Fly but offers an ease of daily driving more obvious than the Sport. 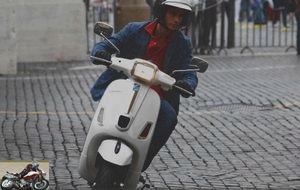 More dynamic than the Fly on the first laps of the wheel, the S on the other hand runs out of steam more quickly, not having the same reach as its sporting big brother. Suddenly, the revving is slow beyond 70 km / h and the arrival on the motorway a little longer…. even if the scooter climbs to a small 105 km / h odometer; or 95 km / h real. Despite the self-supporting hull giving good rigidity to the whole, the S is sensitive to changes of direction, a phenomenon amplified by the lightness of the steering, which does not necessarily give you confidence at maximum speed.. 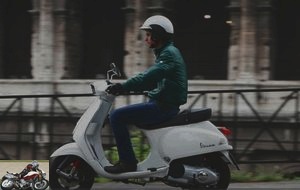 The front disc brake offers excellent bite and power, power that comes in quickly and will even require a bit of dexterity in the wet, especially since there is no need to force the brakes hard to do so. Even the rear brake is efficient and more powerful than usual. In fact, braking is sufficient in 80% of cases, with a grip with two fingers, or even one finger in town at regulatory speed.. 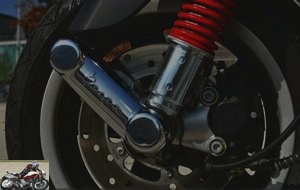 The thick, well-mounted saddle offers rather good comfort, on its own. On the other hand, the suspensions are dry and will bring up well in the back the defects of the road. It’s not the worst, but with Piaggio and Vespa there is better, even much better. 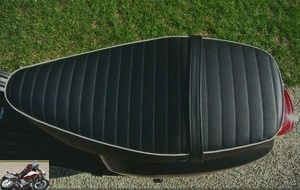 The apron houses two small exterior storage compartment at the front, convenient to slip in a ticket or a small object temporarily.
As much as the scooter is on the outside, there is on the other hand the usual small storage space under the saddle which leaves at best the capacity to board a small jet. We will add an anti-theft device, standard and therefore not too long if possible.
With the absence of a passenger handle, getting onto the center stand is a little less easy; even though the side stand is there. But the latter folding automatically, practical in some aspects, it gives less confidence to leave the scooter on the side in all circumstances, especially since there is no parking brake on Vespas in general.. 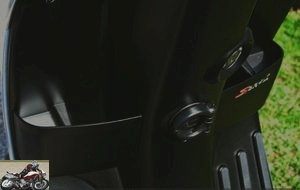 The absence of a handle makes setting up a power plant a little less easy than usual, having only the weight of the foot and the handlebars to bring the scooter to the power plant. A matter of habit, of course, but is less practical on a daily basis.

The gauge is rather precise and goes down regularly, arriving in the middle from 75 kilometers … the scooter arriving on reserve after 150 kilometers. With an 8-liter tank, it offers a range of approximately 220 kilometers.. 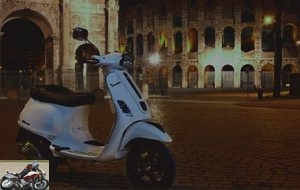 Elegant, sympathetic, the Vespa S renews with the Vespa tradition by offering an Italian line, pleasant. The services are at the level with an alert and very manoeuvrable scooter in the city which will find its limits especially for making peri-urban, except in an exceptional way. There remains the price, a bit high with regard to the services, which would deserve to turn squarely towards the sport model or on the contrary fall back to a model like the Fly which will do the same … but without the legend.

The technical sheet of the Vespa S scooter