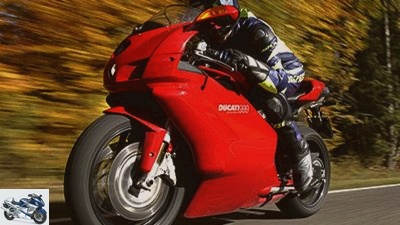 At first glance, the new Ducati 999 is the well-known ?? and unloved by many Ducati fans ?? Stayed true to the line. However, a comparison with the previous model reveals a major leap in evolution.

The 2005 Testastretta is one of the most impressive two-cylinder engines that ever existed in a production motorcycle. Response and load change behavior were already in the old parade disciplines, in terms of power delivery the new one even increases, which gives it one point more. It’s a shame that the stiff clutch has remained.

Top class is and remains that
Landing gear. And although the new swing arm is more massive, that
impeccable driving behavior of the
The predecessor can do this on the
Country road and in the top test-
Do not surpass the course.

The Brembo braking system, which is very effective and controllable, is only weak when it is wet. Then she responds with a slight delay. The higher and further apart mirrors provide a little more consideration. With the Michelin Pilot Power, the set-up torque is lower than with the Pirelli MTR 21/22 that have been installed so far. Therefore, the new one in this discipline receives one point more.

The 2005 model in the monoposto version gets top marks
in terms of the possible payload. The theoretical range
is limited by the small volume of the tank.

Comfortable ergonomics, though
With a heavy load on the wrists, but plenty of freedom of movement, both offer 999. The improved wind protection is rewarded with two additional points.

The consumption of 5.5 liters on the country road is acceptable for a super sports car. The workmanship is also slowly approaching what you can expect from a motorcycle in this price range. This means a quantum leap in price-performance-
Relationship, however, by no means.

Courageous from Ducati, at the fierce
the criticized line by designer Pierre Terblanche. With much
The Italians have succeeded in loving detail, making the look of the 999 more pleasing
to make and their engine still-
times to strengthen. Hopefully it will now get the attention it deserves.