With 80 cm3 and 5 more horsepower than the 990 R, the “big brutal” is positioned at the top of the pyramid in the great family of roadsters. Will she manage to justify the € 3,000 that separates her from her younger sister? ? 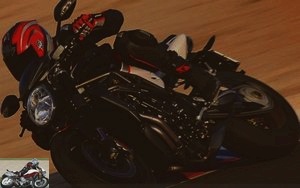 Externally, the 1090 RR stands out at first glance from the 990 by its red cylinder head cover. Playing it nobility, it capped its 1078 cc engine with a red cylinder head ("testa rossa") to show off its rank.. 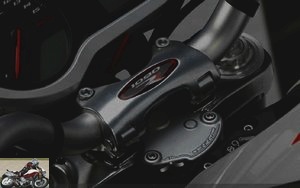 A discerning eye also notices the 10-spoke wheels, while the younger has star wheels. Then, if we linger again, we notice that the Brembo calipers are here cut in the mass for more rigidity. The rear shock absorber equipped with a separate cylinder is adjustable in compression and rebound while at the handlebars, we notice a very discreet, perfectly integrated axial steering damper. And then there are also the hidden details like the better quality fork or the anti-slip clutch and the possibility of adjusting the trim and the column angle. A host of "little things" which put together make a big difference and which clearly justifies the 3,000 euros difference; differences which could however go unnoticed in the eyes of the neophyte. 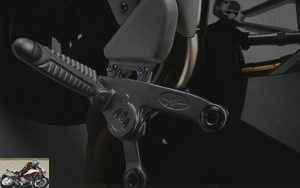 There is no difference in height or width with the 990 R. The template is contained and nothing impressive for a 1000 and up. Bodywork and chassis are identical, but once again the 1090 is distinguished by adjustable footrests which allow the ergonomics of the cockpit to be adjusted as efficiently as possible. Another refinement reserved for it. However, on both models, the selector and brake pedal tips are mounted on eccentrics.. 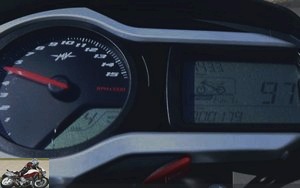 We must state beforehand that our test 1090 had inadvertently lost some of its clamping accessories. Without being totally "full", she had a certain freedom that gave her back a good deal of her pep. However, at stop there is no difference in noise with the 990, moreover to be fair we should even talk about music ! ! !

No doubt, it is aptly named! As soon as the throttle is opened, you can tell that there are people jostling around the stable. It’s borderline aggressive and probably a bit tiring in the long run when you want a restful ride. Apart from this detail, the other controls are smooth and the engine is flexible. He agrees to drive in 4 th at idle, but he forgets the smoothness as soon as you touch the right grip. 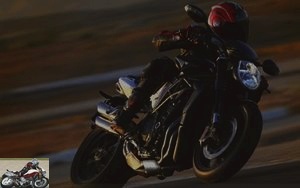 This time it is very easy to tell the difference between a 990 and the 1090, one being restricted and the other not totally it is true. From the slightest rotation of the handle, the 1090 scoots, even at low throttle openings, so without exploiting the full power of the unbridled version. The covers are manly, we could even say "cannonnesques". It’s metal screaming that engine !

Yet our bike, which only displays 170 km on the clock, is far from being released. A difference that can also be seen in the mid-range vibrations that can be felt in the handlebars and which cloud the mirrors.

If not, the speed limits and protection? Delicate problem for the first part of the question and ordinary litany about a roadster for the second part, even if the little windshield saves a little … as long as the speeds remain reasonable 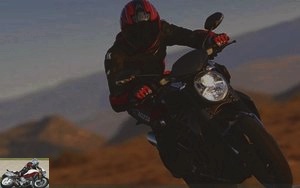 Ah the national ones, with their semi-trailers which roll in single file…. One thing is for sure, they won’t bother you much. A shot of gas and presto, we play leapfrog with the line of cars stuck behind. It’s clear, this Brutale sends big! The big, fast curves are a real treat. Its course is imperial, the high-end suspensions do a masterful job and filter the imperfections of the asphalt to allow the pilot to stay focused on his trajectory whatever the speed. We ride with confidence and we have fun. 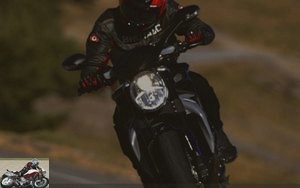 On the departmental roads, you will be difficult to follow. With its war ball engine, rigid chassis and top level suspensions, you will have fun on this terrain. With the eyes that look into the distance, you will draw beautiful curves with a smile on your lips. You can even take out the big game with trapper brakes. The Dunlop Qualifier RRs leave a good margin of grip and under acceleration the steering damper is there to avoid guide bars. Very full, the engine lifts the front wheel at the slightest rotation of the throttle, in three words: it’s recreation ! 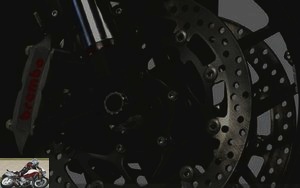 With its 4-piston radial monobloc calipers, that is to say cut in the mass, the 1090 RR has the best and also offers the best, both in terms of pleasure and power. However, it is difficult to make a real difference on the road with the equipment of the 990 R, except that the better quality fork gives an even higher level of grip on bumpy ground.. 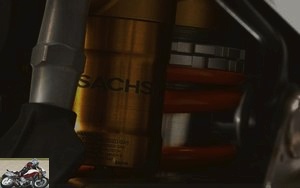 No mystery, with Sachs suspensions of this level, we notice the difference between the two machines. Where a 990 wriggles, the 1090 RR is imperial and overall comfort takes advantage of this difference. The fiercest will find the Ar shock absorber still a little soft, which does not affect comfort, let’s face it. A small regret all the same the more vibrations present on the big engine which affect the pleasure, but nothing serious.

On our varied route, we consumed 8.5l. / 100, which is no small feat. Even if the breathtaking performance of the engine does not leave much hope for much less, it still does not hurt. Buy and sell, this Brutale is going to cost you dearly. Little consolation, the large 23-liter tank that avoids refueling too often.

The question is almost as incongruous as whether Adriana Karembeu washes the dishes ….
We are almost irrelevant on this type of machine. Treat yourself to an Italian Diva with sensual curves and impeccable fittings, that is the MV buyer’s credo. Unless he got the wrong address, he won’t look for the center stand, ABS or heated grips…. On the other hand, you have an extractable box which will certainly be used less often (ditto on the 990 R)! 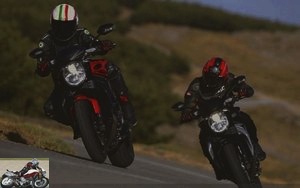 No doubt, the 3000 € claimed in addition are justified. Braking, suspension, finish and engine really live up to what you would expect on an exceptional machine. By its lines and its quality of manufacture this roadster stands out from the lot of Japanese productions. If you can afford the extra cost that separates the 990 R from the 1090 RR, take the plunge, you won’t be disappointed.

Motorcycle showing 170 km at the start. 220 km of departmental, national, villages and a small portion of the motorway to finish.