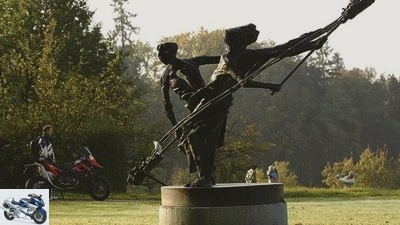 Whether with Alemanni, Romans or Imperial Knights? Hohenlohe has long been the first address. In the modern age also among motorcyclists.

“As always, I owe your Imperial Majesty my due respect. But he, tell him, he can lick my ass!” Whether Imperial Knight Gottfried von Berlichingen actually expressed himself so disrespectfully to the captain of the besiegers of his castle in 1519 has not been historically proven. Nevertheless, the so-called Gotz quote, which Johann Wolfgang von Goethe gave him in drama 250 years later, helped “Gotz von Berlichingen” put in the mouth, to lasting fame. To this day, the knight with the iron hand – Gotz lost his right hand in battle, which was replaced by a technically brilliant metal prosthesis with movable fingers – is omnipresent in this area. Via Berlichingen (place of birth), Jagsthausen (childhood) and the Schontal monastery (grave), his life today leads to one of the ten most livable districts in Germany (FOCUS Money 2006 study) – Hohenlohe.

Perhaps it is also this Gotz’sche kind of Hohenlohe “Grod out”, of the unpretentious and down-to-earth that makes this area appealing. Because you can feel: This is where people live. Here, the half-timbering of medieval gems such as Schwabisch Hall or Rothenburg alternates almost seamlessly with the photovoltaic-equipped barn roofs of agricultural villages. Can the leisurely roll along Castle, Poet and Romantic Road be exchanged in minutes for scratching pegs on nameless, but wonderfully curved side streets. 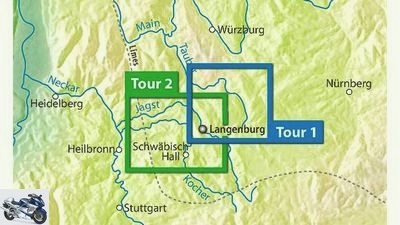 Streets that call for handling luminaries like the 690 KTM. On which the full-bodied single-cylinder can show off its agility on the serpentine ascents from the Jagst, Kocher or Taubertal valleys.

A charm that the Romans were sure to find neither in that region nor in the ancestors of the knight Gotz. In order to intimidate the rebellious tribe of the Alemanni, they built the Limes, which in the western foothills of the Tour, regardless of the difficult terrain structure, came over a length of 80 kilometers from Walldurn between Jagsthausen and Mainhardt to Welzheim, dead straight over the hills and through the deep incised river valleys. Not even the Great Wall of China has such a distance without a change of direction.

The masterpiece of land surveying and defense technology was of little use to the Romans. In AD 260, the locals overran the protective wall. What remains of that era are interesting excavations (Mainhardt, Jagsthausen), replica watchtowers (Gleichen) or an almost untouched part of the Limes (Pfahlbach). And to this day, an owed respect for history, as always. 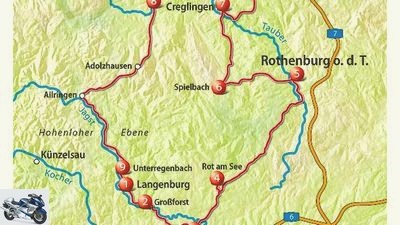 Base quarters
The starting point for both routes is Langenburg (www.langenburg.de). You can spend the night high above the Jagsttal with a magnificent view. In addition, the small town with the imposing castle, the car museum and a well-developed gastronomy set the mood for the coming impressions of the two day tours.

to eat and drink
Eating and drinking well are a matter of course in Hohenlohe. And the portions are not too tightly calculated. The kitchen is based heavily on the Bavarian and Swabian menu. White sausages and meat platters are just as much a part of the offer as Maultaschen and schnitzel with spaetzle. The people of Hohenlohe are more inventive when it comes to desserts. Master confectioner Wibel invented a fingertip-sized biscuit, the so-called Wibele, in Langenburg. In Rothenburg, snowballs are a local specialty. Tip: The rather dry shortcrust pastry is much more pleasant to eat with chocolate or cream filling.

Blockages
Fortunately, no road closures for motorcycles are known. On the contrary: The Hohenlohe Tourist Association explicitly advertises motorcyclists on its homepage www.hs-tourismus.de.

Stay
In Langenburg, Weikersheim (www.weikersheim.de) and above all of course in Rothenburg (www.rothenburg.de) you will find accommodation of all price and quality levels. 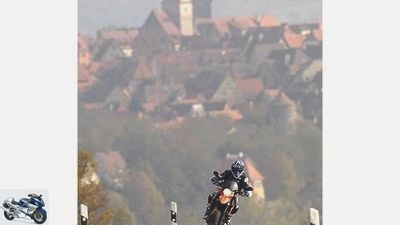 The starting point of the tour is Langenburg. Not only the fantastic view from the castle into the Jagsttal inspires, also vintage car fans get their money’s worth. With the Langenburg Historic, a hill climb for historic vehicles (unfortunately no motorcycles) takes place between Bachlingen and Langenburg, the Prince of Hohenlohe-Langenburg’s car museum is open all year round with vehicles from the pre-war period. The idyll of the Jagsttal is interrupted in the large forest by grazing llamas and ostriches. Amusement park or petting zoo? Not in Hohenlohe. The prices for ostrich steaks or llama wool can be viewed at www.jagsttalranch.de.

Kirchberg an der Jagst and Rot am See offer a foretaste of the German half-timbered Eldorado par excellence: Rothenburg ob der Tauber. Mainly occupied by Japanese and Americans, the city nevertheless avoids an artificial Disneyland ambience – apart from the Christmas house, which is open all year round. Worth seeing: the crime museum with insights into the medieval judiciary. 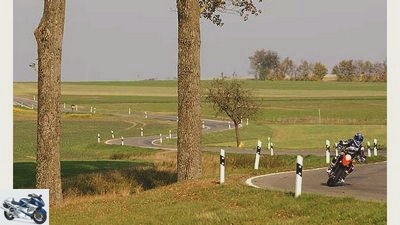 A few meters behind Rothenburg (in the direction of Niederstetten), agriculture is displacing tourism, and international flair is giving way to Hohenlohe quirkiness. For example in the Gold-Ochsen-Brewery in Spielbach. A place where the past becomes the present. For centuries a farmer’s tavern, later a Treff Alternative and 68er, today gastronomy far from any kind of zeitgeist.

The local bikers call the five switchbacks about two kilometers to Creglingen from Craintal in the direction of Freudenbach as Klein-Stilfser. A little too much of the honor, but the asphalt is grippy, the curve radii are quick. Weikersheim claims to be the most beautiful of the Hohenlohe castles. In any case, it is the least crowded. Especially since the ascent to Bronn can compete with the Mini-Stilfser Joch. 20 kilometers later, the Hohenloher level plunges down to the Jagst near Mulfingen, which is crossed shortly afterwards in Unterregenbach by an imposing, covered wooden bridge, an ark bridge. 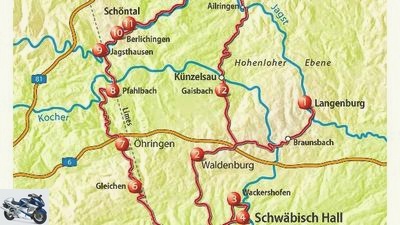 Biker meeting
Even if not on this route, but only a few kilometers away, one of the largest motorcycle meeting points in southern Germany has established itself: the “Platte” in Lowenstein. Several hundred motorcyclists are more the rule than the exception. Directions: On the B 14, later the B 39 from Schwabisch Hall to Heilbronn, the path leads directly past the viewing platform. The motorcycle service on the Trautenhof even reaches four-digit numbers every first Sunday of the month at ten o’clock (www.elops.de/motorradfahrer-gottesdienst-trautenhof). Even those who are less strict believers are welcome. Directions: on the hilltop between Sindringen and Jagsthausen turn left towards Lampoldshausen. It is only two kilometers from there to the Trautenhof.

Detours and ways out:
If you still haven’t had enough of the Middle Ages despite the imposing accumulation of castles and palaces, you will easily find it. In Neuenstein – between Ohringen and Waldenburg – the moated castle impresses with an impressive collection of medieval weapons and furniture. In Mockmuhl – about twelve kilometers downstream from Jagsthausen – the Gotzenburg is reminiscent of the belligerent knight with the iron fist. According to legend, the siege of the place by imperial troops is said to have carried the unyielding nobleman away to that memorable quote. With Stetten Castle (follow the signs to Amrichshausen), Kunzelsau offers the best-preserved castle complex in southern Germany.

Bans for motorcycles are – as on Tour 1 – also unknown here. 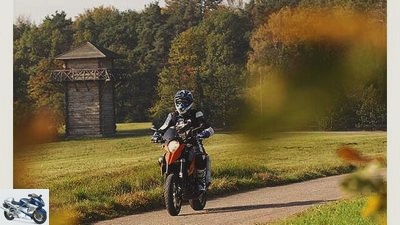 The reconstructed watchtower at Gleichen is reminiscent of the Limes.

From Langenburg, the route over Bachlingen in the Jagsttal overcomes in a few, beautifully curved kilometers the ridge over to Braunsbach in the Kocher valley, which is spanned there by the highest motorway bridge in Germany at 185 meters. The route to Waldenburg meanders almost parallel to that motorway. The so-called Hohenlohe balcony, which is 500 meters high, offers a wonderful view of the Hohenlohe plain below. Only a small sign shows the narrow path over the outlying Ziegelhutte and Goldbach, before the industrial area of ​​Schwabisch Hall with its fast-food restaurants and shopping centers abruptly interrupts the idyll.

The only escape route is the B 14 (turn left), on which the Wackershofen Open Air Museum is signposted one kilometer later. A true-to-original village depicts rural life over the centuries and puts visitors in the mood for the medieval-style Schwabisch Hall. The former salt boiler town succeeds in combining half-timbered buildings with modern life. Open-air plays on the stairs of St. Michaelskirche or the modern Globe Theater successfully avoid sentimental museum flair before the B 14 (towards Heilbronn) turns the wheel of history back even further. 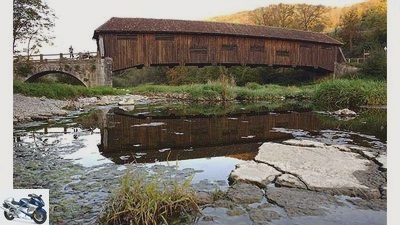 One of the rare ark bridges is in Unterregenbach.

The Roman Museum in Mainhardt offers an insight into the Roman Empire, whose power was also manifested in a fortified border wall, the Limes. Not only the local excavations remain silent witnesses, but also the reconstruction of a wooden watchtower on the ridge near Gleichen.

After Ohringen (in the direction of Neuenstadt), the charms of the cozy, winding Ohrntal valley between Unterohrn and Ohrnberg become more motorcycle-specific again. At least until a narrow asphalt farm road (towards Friedrichsruhe) awakens the memory. Hardly noticed, just a few meters away from the crossroad towards Pfahlbach, crouches a 280-meter-long, almost intact remnant of the Limes.

Between Sindringen and Jagsthausen – the point where Jagst and Kocher come closest to each other on over 200 kilometers of river – the timeline rushes back to the Middle Ages. The legendary iron hand of the knight Gotz is exhibited in the castle museum in Jagsthausen, his presumed birthplace in Berlichingen opposite the church, today the manor house of a farm, remains officially anonymous. In contrast to the Schontal Monastery, which not only houses the grave of Gotz, who is over 80 years old, but whose pomp, which still exists today, also demonstrates the contrast between the church and the poor population of that era.

Back to the present, back to Kochertal – with casual swings from Ailringen to Kunzelsau. In its suburb of Gaisbach (towards Schwabisch Hall), the screw magnate Adolf Wurth has a company museum and a renowned, publicly accessible art collection. Art piece – in Hohenlohe.