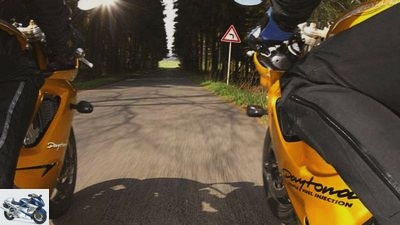 Everyone knows the Moselle, Eifel, Rhine Valley and Palatinate Forest. The Hunsruck lies exactly in between and leads a shadowy existence that it does not deserve.

Lush, arched meadows and fields alternate with light-flooded deciduous forest, creating a colorful patchwork quilt in the humped landscape. Slate-gray clustered villages lie in between like islands in the green. The Hunsruck’s bitter charm lies in this typical contrast between agricultural plateaus and wooded ridges. Castle ruins enthrone valleys, steep vineyards want to be climbed in serpentines, half-timbered idyll invites you to stroll. Aside from the tourist highlights, it is the countless gems to be discovered here that make this region so attractive. In addition, there is a network of tiny country roads that cross the Hunsruck, often resembles a labyrinth of curves with no way out and in which one is usually completely undisturbed.

Long before the Romans, the Celts dug their tracks in the southernmost foothills of the Rhenish Slate Mountains. Much evidence of their culture was uncovered and made accessible in the Hunsruck, such as the reconstructed Celtic Altburg near Bundenbach. While the Romans opened up the region until AD 400 and built an important trade route between Bingen am Rhein and Trier, the sun king Louis XIV brought about the great destruction. In 1689 all towns and castles in the Hunsruck burned down. This event is still commemorated today on the so-called “Jammertag”.

The sparsely populated low mountain range is one of the most wooded areas in Germany. Slate mining and logging for smelting were important industries alongside agriculture. Precious stone deposits near Idar-Oberstein gave the city its shine. However, the poor soils could not feed the residents adequately, and the mining of precious stones was no longer worthwhile at the beginning of the 19th century. The saying “rich in stones, but at the same time poor as a beggar” best describes life at that time. Hundreds of thousands emigrated to South America or Russia in the 18th and 19th centuries. Today the Hunsruck is considered a structurally weak region, larger industrial settlements are the exception. Not least because of this, it is characterized as an ideal biker area.

Our route tips are determined by the varied Hunsruck landscapes. Route 1 runs through the more open, agricultural foothills of the Hunsruck in the southwest and touches urban areas near Saarburg and Mettlach. Steep ascents and descents with tight serpentines as well as picturesque views from the Hunsruck heights characterize the approximately 160 kilometer long tour.

The 200 kilometers of the second tour, paired with refreshingly shady sections through the Idarwald and the densely wooded Dhrontal, also offer the finest cornering fun. 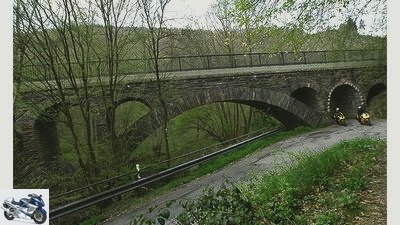 The starting point is Germany’s oldest city Trier, where the Romans drank good wine. Swinging towards Ruwer at the distribution circle, the route follows the valley of the same name via Waldrach to Gutweiler.

Even the smallest village in the Hunsruck has its own castle. So also Sommerau, which with 75 inhabitants is one of the smallest communities in the district. Around the ruins in the basin there are not only the tightest curves, but also all sorts of rumors about Knights Templar and an underground passage to the amphitheater in Trier, seven kilometers away.

Above Holzerath you will be rewarded with a wonderful view over the colorful patchwork carpet of the Hunsruckhohe before the road disappears into the dark Osburger Hochwald. The Kell reservoir soon appears (for a coffee break, follow the sign “Seehaus Kell am See”!), And shortly after the village, turn right into the forest, past the Grimburg to Wadrill.

From here the route follows the Eichenlaubstrabe along the southern edge of the Black Forest high forest via Weiskirchen to Mettlach and its name is reminiscent of the former tradition of coppice farming that shaped large parts of the local landscape.

The steep driveway from Mettlach to Orscholz leads to what is probably the most exciting view that one can have of a river bend. From up here to watch how the boatmen maneuver their boats around the Saar’s eye of the needle in a snail’s drift – madness.

The old town of Saarburg, which can be reached a few turns further, is hardly less impressive. The waterfall in the city center was used until the 20th century to power tote and grain mills, which is clearly shown in the neighboring mill museum. In order to take in the intoxicating scenery, we recommend resting in the Meridian restaurant right by the waterfall – preferably without ear plugs.

Freshly strengthened, it goes up the B 407 to Zerf, where a winding roller coaster tests the stomach for stability over Hentern and Lampaden and then swings further north to the B 268. There a last look over the hilly landscape of the southern Hunsruck, before you plunge down again shortly after Pellingen to Franzenheim and Pluwig, where the tour to Trier gradually comes to an end. 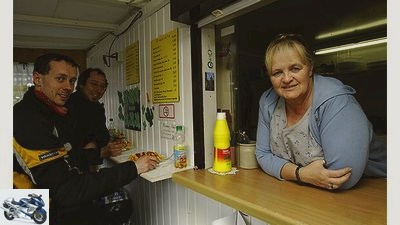 Waltraud Beier offers refreshment for the tour in the Kaktus snack bar.

to eat and drink
What used to be “poor people’s food” can now be found on many menus as a delicious potato specialty: Potato sausage, dibbelabbes or shells (potatoes with eggs and bacon or dried meat), murde on clover (raw potato dumplings with carrots and pork) – simple try it. There is a spit roast area around Idar-Oberstein.

Worth seeing
Nature lovers shouldn’t miss the spacious enclosures of the Wolf Park in Merzig, where Werner Freund has been doing wolf research for over 30 years. Open from daybreak until evening. The small detour to the Gasthaus Zummethof is worthwhile because of the viewing terrace high above the Moselle – instead of turning towards the paper mill, just continue around the next bend. If you are into the historical, you will find offers en masse. Beautiful: The Celtic Altburg near Bundenbach, the Belgnium Archaeological Park, Baldenau Castle just beyond Morbach and the mines in Fell and Fischbach. Fans of aircraft will get their money’s worth in the Hermeskeil flight exhibition. Over 100 exhibits cover all epochs of aviation. Open from April to November from 10 a.m. to 6 p.m..

activities
On the Erbeskopf, the highest mountain in the Hunsruck at 816 meters, you can swap your motorcycle for a toboggan and whiz down to the valley on the summer toboggan run. Open from Easter to November every day from 1 p.m. to 6 p.m., on Sundays and public holidays from 11 a.m. to 6 p.m.. 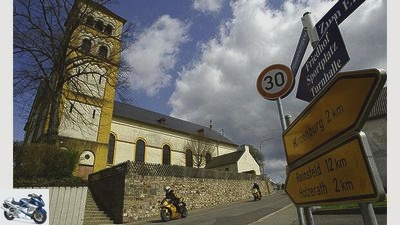 In the Hunsruck, the church is where it belongs: in the village.

Base quarters
Trier, the oldest city in Germany, has a lot to offer around wine and Romans. The “Roman adventure tours” through the amphitheater, the Porta Nigra and the Imperial Baths are exciting. Numerous cozy beer gardens invite you to end the day with a glass of Viez (apple wine) or a wine from the region. For example, opposite the Trier Cathedral in the rustic Kesselstatt wine tavern. There are overnight accommodations in all price and quality classes, information and booking at www.trier.de/tourismus. If you want to set up camp a little further away, we recommend the Hotel Landgasthof Simon in Waldrach / Ruwer. Motorcyclists are welcome guests there. Single room 39, double room 65 euros, breakfast included. Telephone 06500/677.

literature
The HB Illustrated Atlas No. 90 “Hunsruck, Naheland, Rheinhessen” for 8.50 euros provides information about the country, its people and its historical background. Although its action takes place more in the Eifel, the unmistakable characters and very precise landscape descriptions of the Eifel crime novels by Jacques Berndorf (grafit publishing house) are an entertaining introduction to the region and the people who live here. The Falk regional map 11 “Mosel-Eifel, Hunsruck, Palatinate Forest”, scale 1: 150,000, also shows the smallest streets in the Saar-Hunsruck region in detail. Price 6.50 euros.

Meetings and closings
A little off the beaten track, bikers meet in Cochem at the parking lot on the banks of the Moselle. There are no known closures on the routes driven. In the vicinity, however, there is a complete closure on the route from Traben-Trarbach on the Moselle to Longkamp between Bad Wildstein and Kautenbach. 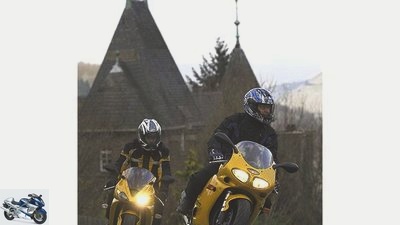 Over the Hunsruck heights to the German Gemstone Road.

From Trier it goes first again towards Ruwer and then via Mertesdorf into the neighboring valley to Fell. On the five fast serpentines up to Thomm, the association “Racing Team Trier e. V. “the annual hill climb for the Bilstein Cup. Leisurely connoisseurs have more of the route, which is also not stingy with scenic attractions in the following about the decision in the direction of Trittenheim. Wooded sections provide variety and at Zummeterhof the vineyard backdrop on the Moselle slope marks the western border of the Hunsruck.

Our route leaves the idyllic Drohntal, swings up to the Hunsruckhohe and there via Horath as K 80 to Morbach. If you want to extend the loop by around 20 kilometers, you can drive from Morbach via Rhaunen through the idyllic Hahnenbachtal to Kirn and on to Idar-Oberstein. All others set course for Asbacherhutte, which is already on Edelsteinstrasse. Here Ernstotto Biehl demonstrates how the precious stones were worked a hundred years ago. In the fourth generation he runs this unique mill grinding shop, the mill wheel of which drives grinding stones via ancient transmission systems. Traditions are maintained in the Hunsruck and historical values ​​are preserved. The beautifully restored half-timbered village of Herrstein, where Johannes Buckler, known as Schinderhannes, was imprisoned for one night in the tower in 1798, testifies to the careful handling of history.

Shortly before Hintertiefenbach, the narrow road climbs in wonderful bends over Gerach back to the plateau and winds through meadows and fields into the gemstone metropolis of Idar-Oberstein. Tons of imported agates, amethysts and quartz tinkle in front of the shops in every imaginable size, shape and color. Bosselstein Castle, Oberstein Castle and the rock church crouching in a rock niche tower above the neat pedestrian zone with its precious stone museum on the market square.

A delicious, inexpensive currywurst at the “Kaktus” snack bar at the end of Birkenfeld helps you decide: after a few kilometers, long-distance drivers can reach the A 62 near Nohfelden from here. If you want to stay in the area, follow the L 165 to Hermeskeil, then a piece of the Hunsruckhohenstrasse and turn into the Osburger Hochwald at Kell am See in the direction of Heddert, Schondorf, Pluwig.