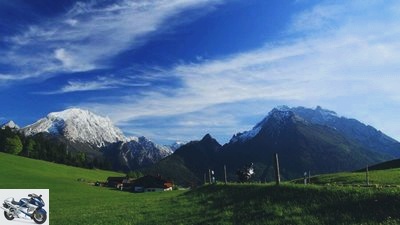 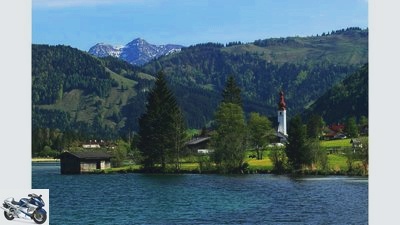 1/14
Tegernsee Tour: Escape from the city is made easy on Tyrol’s side streets. Postcard motifs included. 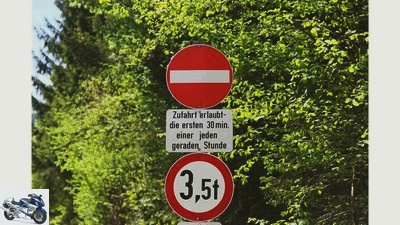 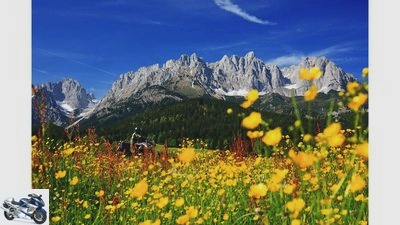 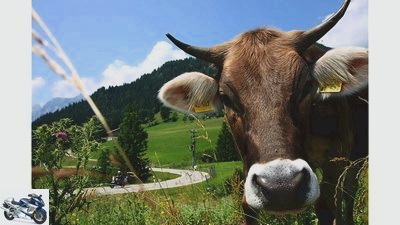 4/14
Tegernsee tour: Even the cows are cooler in Ramsau than anywhere else. 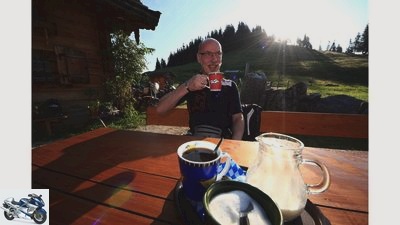 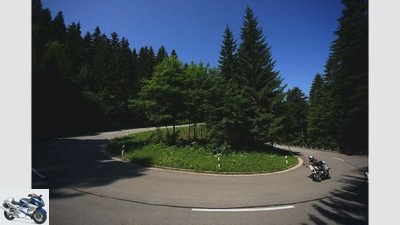 6/14
Tegernsee Tour: The tour is ideal for a weekend trip that includes everything that motorcyclists dream of. 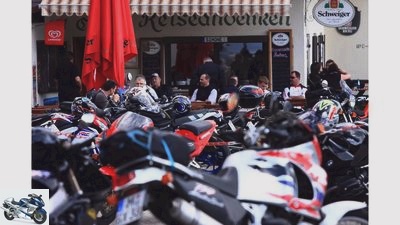 7/14
Tegernsee-Tour: At the Sudelfelder Cafe Kotz the air burns on the weekends. People meet here to relax and chat about petrol. 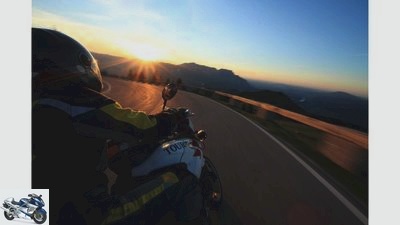 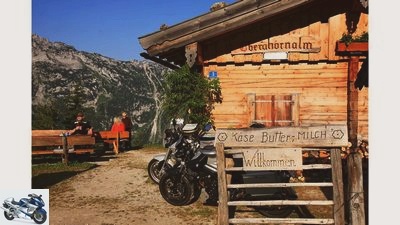 9/14
Tegernsee tour: During the break, the engines crackle cool down. The soul recovers with fresh natural products. 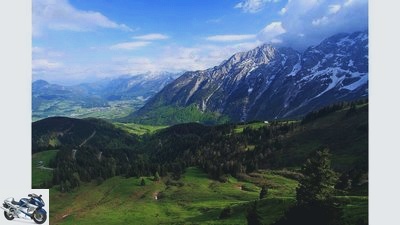 10/14
Tegernsee tour: Rossfeldstrasse the third: Such panoramas are part of the agenda here. 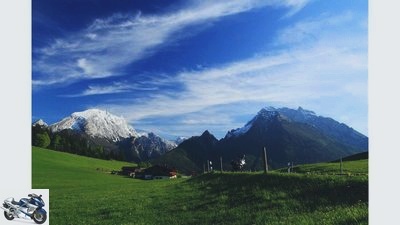 11/14
Tegernsee Tour: This is where the most satisfied people in the republic live. Dirk Schafer explores the Tegernsee region by motorcycle. 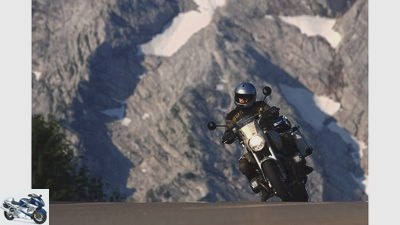 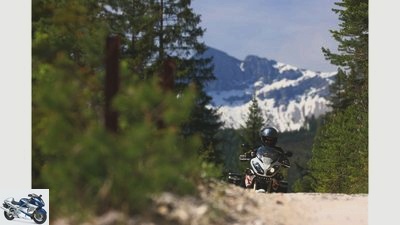 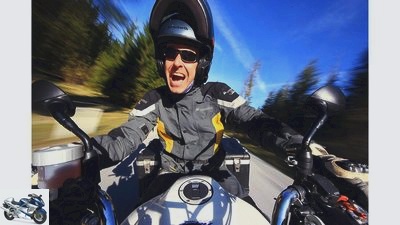 Tour tip for the Bavarian and Tyrolean Alps

Motorcycle tour: Tegernsee / Berchtesgaden
With the motorcycle through the Tegernsee region

According to statistics, the most satisfied people in the republic should live in the area around Lake Tegernsee. Or the richest? Uli Hoeneb, Alexander Schalck-Golodkowski, Willy Bogner junior have set up their residences within striking distance. Anyway, Dirk Schafer started from the point of satisfaction to a motorcycle tour through the Bavarian and Tyrolean Alps.

Do you like dead ends? No? Me, yes. Of course not those that end up bizarre in big urban backyards. But think, for example, of the wonderful side valleys in the Swiss Wallis. All dead ends. But what kind! That’s why I don’t mind the information at Tegernsee that the route to Spitzingsee is closed from Valepp. However, there are two minor inconveniences: The speed limit is 30 km / h, and the toll booth is at 4.5 kilometers. It is already late afternoon and that is probably why the ticket booth is orphaned. Nevertheless we stop for a moment. Out of the corner of my eye I saw a piece of paper with large letters at the toll booth: “Bye-bye-free zone!” Those who work here either have a special sense of humor – or none at all.

Motorcycle tour: Tegernsee / Berchtesgaden
With the motorcycle through the Tegernsee region

The long shadows of the early evening fall on the single-lane road through the bye-free zone. It’s good that the toll man has already clocked out for today. Perhaps we would have snubbed him with a wordless greeting, just to bypass the “goodbye” that has grown in us. The asphalt sways through the undergrowth, scrapes past the rugged rock. The last rays of sunshine pierce through the trees while the stream gurgles to our right. We reach the Valepp forester’s lodge just in time for dinner. From the balconies, streams of flowers pour over turned parapets, and an irresistible smell pours from the kitchen onto the terrace. After 700 kilometers from the bye zone, the day can take its hat off here. Unless…

A boy, dressed up as a waiter, explains that the day is not over for us: “Away from fire protection, we are currently renting no rooms”. My gesture full of comment that we are non-smokers does not count, and my reference to the highly dangerous processes in the kitchen fizzles out in a shrug. Yes, then: “Bye!” “Pfiat di!” Oh yes, already forgotten. Then stay overnight somewhere else. 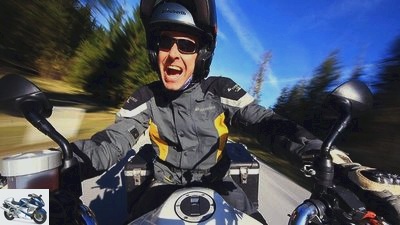 Lord of the Flies: Rock ‘n’ Roll on Achenseestrasse.

A layer of feather-light haze rises from the still pale blue Tegernsee into the sky. The early sun will soon change the color of the water to ultramarine. The first window shutters are opened on Tegernseer Uferstrasse. In the rearview mirror, the lake with the gently undulating land is swallowed up by a row of trees. While others are still spreading the jam on the bread roll, our machines step uphill in the Vollen direction towards the Achenpass. The second coffee is being poured at the lake when the top of the pass flies past in a croissant bend to the left. Gas back, two
Down the corridors, before the junction to Sylvensteinsee it’s all going. I’m wide awake.

The next dead end. Or not? Just across the border to Tyrol, a road branches off to Steinberg. Looks tempting on the map. The continuous connection further to Kramsach is, however, durchgeixt behind Steinberg. Left turn signal, let’s see.

Cowbells clink from a nearby pasture. The distant rumbling of two tractors is almost swallowed up by the woods at the foot of the Rofan. Steinberg’s houses bask between lush meadows within sight. The cursed path branches off well before the church tower. Is it really blocked? A few hundred meters later comes the Solomonic and eccentric answer: Yes, it is blocked. However, access is still permitted for the first 30 minutes of every even hour. A look at the clock: 10:28. So can we or not? The first 30 … just an hour … gas!

The gravel is tame. In contrast to the Steinberger Ache. To our right, at the bottom of the abyss, the river foams violently. At its mouth, several kayakers are floating on the now calmer water. You come straight out of the white water of the Kaiserklamm. 100 years ago the wood was lifted from the mountains to the Inn here. The Tiger and the BMW drift two kilometers upstream into a real dead end this time until the road ends just before the gorge at the beer garden of the “Kaiserhaus”. 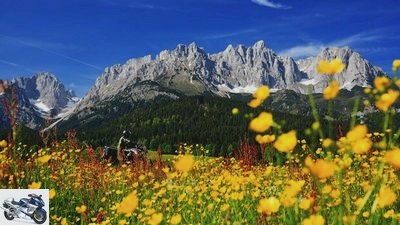 The Wilder Kaiser is tame today.

It’s not far from the “Kaiserhaus” to the Wilder Kaiser. And he’s going on holiday idyll today. Like most motorized cars who share our direction. Everyone is relaxed. To the border at Schneizlreuth. I don’t know if it’s just at the limit, but shortly after the imaginary turnpike, the relaxation is over. And the mail starts at Unterjettenberg at the latest. The German Alpine Road shows its best grip, and far ahead, Hochkalter and Watzmann peer over the shoulders of the asphalt. Between the bends that waggle into the Ramsau valley, the road dips briefly into a shady area of ​​forest.

If the sun’s rays find a way through the treetops, they explode in a split second to form a glistening star, only to disappear again just as quickly. Out of the shadows, into the light! If we hurry up halfway, we can celebrate the end of the day on Rossfeldstrasse. Berchtesgaden remains on the left with its crowd of church towers. We’ll have enough time for them tomorrow on the second half of the season to Tegernsee. Now let’s go up to the panorama tour over the city. Crowded coaches and a couple of small cars with yellow license plates trundle down into the valley for dinner. The evening calls us to the mountain. 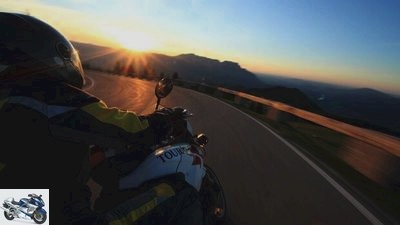 The south toll station is as deserted as the entire route to the Ahornbuchsenkopf. Second, third, fourth gear. The three-cylinder fires uphill, the BMW burns behind. Then on the right hand side the rugged wall of the Hohen Goll shines red in the last daylight. On the short ridge, the perceived temperature drops to a refreshing level, and we let the motorbikes coast. Apart from us, there is only one 125 parked here. The not so young pilot stares into the sun. “Schee, what?” “Yeah!” He stared further into the sun. “And, where are you coming from?” I remember the toll booth in front of Valepp: “from the bye-free zone”. The sun is tilting behind the mountains. “Is as weid von hia?” “Nope, maybe 200 kilometers.” He switches on the ignition. “Yes then good trip. Servus! ”“ Even so, bye! ”I think I won’t learn anymore. bye!

The all-round motorcycles for travel, country roads and off-road

The variety has never been so great 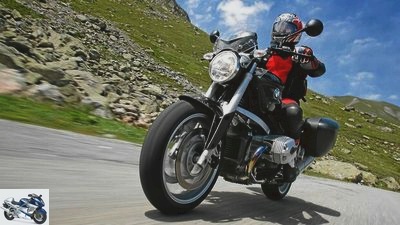 Beefy, safe, stable: the BMW can do everything well, suits most types of drivers. 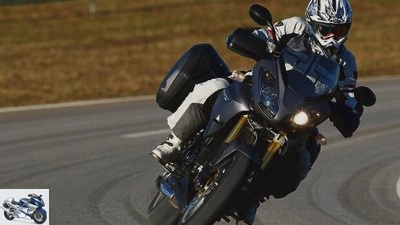 Motorcycle info:
The present tour was with a Triumph Tiger 1050 and a BMW R 1200 R undertaken. Both bikes were equipped with Touratech accessories, which did not change the standard handling characteristics much. On the winding country roads and narrow mountain bends in the region, the duo proved to be handy, safe, stable and comfortable. While the BMW pushes down even more energetically from the lowest engine speeds, the Triumph three-cylinder is acoustically sportier over the entire engine speed range and a bit more snappy at the top. As the former MOTORCYCLE Queen of the Alps, the BMW is the more confident, perfectly balanced all-rounder, while the Triumph, with its light supermoto borrowings, looks more front-wheel-oriented, more pointed and more active to drive. Simple dirt roads are easily manageable with both machines, and the BMW in particular has a surprisingly good performance here. 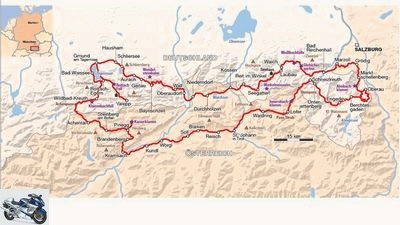 Compared to other curve-intensive and scenic regions, the journey to the German-Austrian border area is easy to manage. So ideal for a weekend trip that includes everything that motorcyclists dream of.

Arrival / travel time: From late spring to autumn you are safe from the worst weather conditions. But the days when old snow still covers the mountains or when the first snow powdered the peaks before winter is particularly appealing. An eye on the weather map is then a must. The route is 390 kilometers and the loop is complete: from Tegernsee to Tyrol, then to the highlight Rossfeldstrasse (www.rossfeldpanoramastrasse.de) and over parts of the German Alpine Road (www.deutsche-alpenstrasse.de) back to Tegernsee. According to Denzel’s Alpine Road Guide, all roads used fall into the simple category SG 1-2. In other words: good surfaces, good grip and lots of fun while driving. In terms of good surfaces and good grip, the Achental-Steinberg-Brandenberg-Kramsach section is an exception. Shortly after Steinberg, a ten-kilometer gravel path begins, which can be easily mastered by experienced riders on street motorcycles. However, entry into the gravel passage is only permitted for 30 minutes during even hours. If you want to bypass the loose ground, choose the alternative route from Achental via Jenbach to Kramsach.

Stay: At the tourist hotspots of the Bavarian Alps and Tyrol, there are dignified hostels on almost every street corner. We felt comfortable at the “Kistlerwirt” (www.kistlerwirt.de) on the Tegernsee. The former farm offers simple rooms at very reasonable prices (double rooms from 35 euros). At 71 euros for a double room, the “Hotel Neuhausl” between Oberau and the Austrian border is more expensive, but also more elegant (www.neuhaeusl.de).

Activities: Action freaks will love rafting or canyoning tours. For adrenaline rushes in the rivers of the Berchtesgadener Land z. B. ASL-Strub (www.asl-strub.de) from 29 euros. Those who want to try their hand at a via ferrata are just as right at the Wilder Kaiser as those who just want to watch the vertical acrobats at the Schleier Waterfall, one of the most difficult climbing routes in Europe (www.wilderkaiser.info). You cannot travel between Berchtesgaden and Rossfeldstrasse without being confronted with the history of Obersalzberg and the National Socialist dictatorship. The Obersalzberg Documentation Center (www.obersalzberg.de) impressively conveys the terrifying role played by Hitler’s second power center in the middle of Alpine paradise. Nevertheless, or perhaps precisely because of it, the visit is a must.

The variety has never been so great

The all-round motorcycles for travel, country roads and off-road