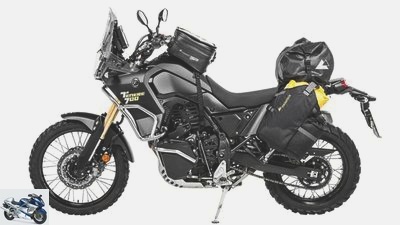 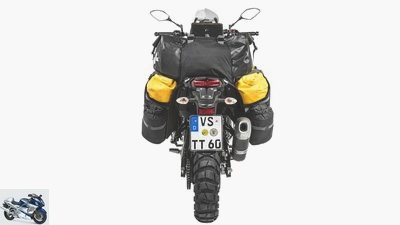 2/8
It offers a volume of 65 liters in four pockets without a top roll. 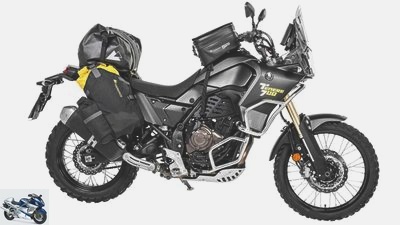 3/8
The system turns the bike into a single-seater and is fastened with four straps. 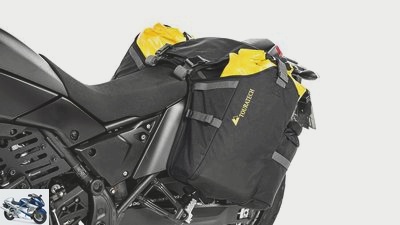 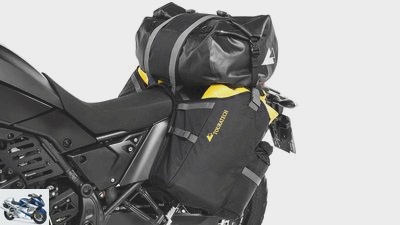 5/8
The double-leaf lid offers space for another large roll or bulky luggage. 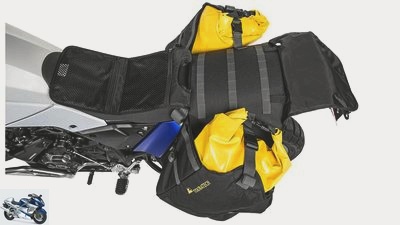 6/8
In the lid there are two small mesh compartments with zippers. 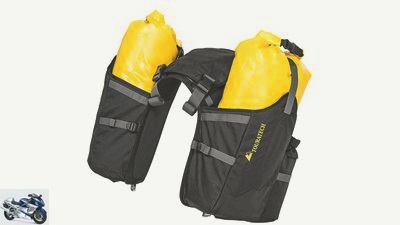 7/8
The side pockets have a solid base that makes loading easier. 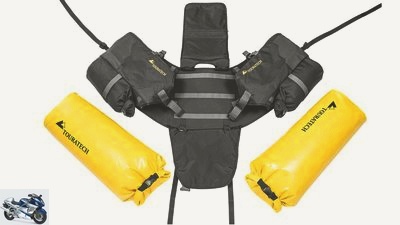 8/8
The system costs 399 euros in the Touratech shop with two roller bags.

With the Discovery system, Touratech offers a universally applicable luggage system that does not require a fixed holder and was developed for rollable luggage bags.

Anyone who is bothered by hard suitcases and the permanently mounted brackets on the motorcycle and generally appreciates the light storm luggage has got for them Touratech the Discovery softbag system is new to the range. The textile belt with the additional pockets is placed over the pillion seat and lashed with four straps to holding points or the frame. The system can be used universally and not specifically for the one shown Yamaha Tenere tailored. Two waterproof panniers are part of the set. 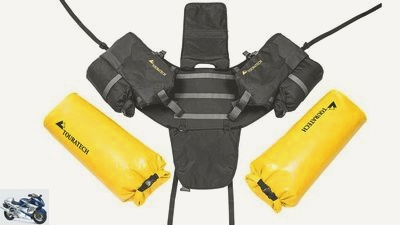 The two large side compartments with roll closures hold up to 25 liters of volume per side and can also be used without the two panniers. Supplemented by two smaller pockets behind with a volume of 7.5 liters each. The two large compartments have a solid base, which should make packing easier and give the load more stability. The two small bags are suitable for chain sprays, rain suits and everything that needs to be quickly accessed during the tour. The carrying belt has a two-winged lid that offers two small mesh pockets with zippers and additional lashing loops for small items. For raised mufflers Touratech optionally a heat protection shield made of stainless steel.

Flood of data for the cockpit

For whom that is not enough

If the 65 liter volume is not enough for you, you can expand the Discovery Set. The two-part cover of the belt, which offers space for a large roll of luggage or other bulky luggage, is used for this. Due to the large surface area of ​​the two wings, the additional luggage sits well in the system. 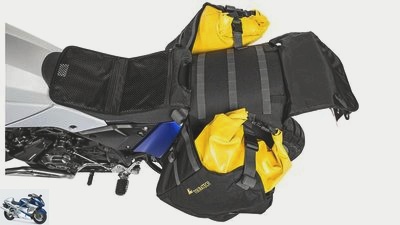 In the lid there are two small mesh compartments with zippers.

Touratech already has the new Discovery system in its shop; the delivery time is specified as two to five days. The set is only available in black and costs 399 euros, the optional heat shield costs 32.90 euros. Any roll bags from Touratech itself start at EUR 29.90 for a volume of 35 liters. The system also works with other models.

Luggage on the motorcycle only…

…in the suitcase. In vehicle color.

…in a duffel bag made of tarpaulin.

…in backpack. I always travel light.

…in a light textile bag. It is not so obvious.

The Discovery system combines easy assembly with high flexibility. And at least 65 liters volume is a word.