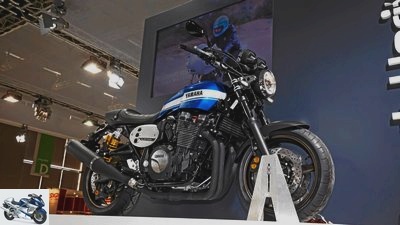 As for the spectacular presentations, the tussle between INTERMOT and EICMA in Milan continues. The lack of one or the other novelty could hardly dampen the good mood of the knowledgeable Cologne audience.

Of course, there were those who were disappointed and disaffected. For example the Honda fans. “Where, please, is the new Africa Twin located?” Was one of the most frequently asked questions in Cologne. The answer: in Milan. “And the Honda RCV?” Probably too. Just like the new R1, which has been eagerly awaited by many Yamaha fans. Or the new four-cylinder fun bike BMW S 1000 XR. Milan, everything first in Milan. Now, of course, you can argue that Cologne also had a lot of premieres. But will that comfort the Scandinavians or the British who had to put up with hundreds of kilometers to travel? Or the people of Dresden and Leipzig who drove across Germany from east to west to experience all the new distillers up close?

Rather not. How should the Cologne audience understand why some of the most exciting hits are withheld from them, while the southern European and alpine biker is offered the entire range of all of the 2015 season’s novelties a month later. INTERMOT visitors probably don’t care much about the knocking and stinging of the trade fair companies for the spectacular premieres. Rather, he asks himself how the troubled southern European markets have earned this loving attention, while the German market, which is currently growing strongly again and is already large in terms of quantities, is being treated so neglected. Reply? There is nothing really comforting. The usual references by manufacturers to international data streams and ubiquitous online presence is a rather helpless attempt. As if such a virtual cyber meeting were a substitute for the multi-dimensional world of experience when you first try it out? See, feel, touch – it’s as sensual as the first exit.

The desire for motorcycles has been rekindled in Germany

But, and now comes the good news: All manufacturers who showed little or nothing will be a little annoyed. The desire for motorcycles has been rekindled in Germany. And not just with the old hands, but also with many newcomers to motorcycling – and thus potential customers. A good proportion of the 201,000 or so visitors who pushed their way through the halls this year (INTERMOT 2012: 203,000) were obviously of a younger year of construction. The slightly declining number of visitors hardly bothered, especially since one has to consider them against the background that the “normal” audience had one less day at the fair this year because Wednesday had been declared a “trade visitor day”. “Over 90 percent of the trade visitors and exhibitors are in favor of the introduction of the trade visitor day”, summed up trade fair boss Gerald Bose in the final report. And announced that a “significant increase in the European trade audience, especially from Italy” had been recorded. How, do the Italians go to Cologne? Is it fair to conclude that despite the Milan gala at the beginning of November, the professionals in particular enjoy coming to the Rhine? Less glamor, more information? It is possible.

Whereby: It’s not as if there wasn’t anything spectacular to see under the cathedral. Above all at the Kawasaki stand, where the Greens presented a motorcycle beyond all previous performance coordinates. The Ninja H2R with compressor-ventilated 1000 series four-cylinder and around 300 hp was so impressively fast even in the stand at the exhibition stand that many thought they were about to take off. That the corresponding street variant Ninja H2 is only presented in Milan, was of little importance. Many Ducati fans should have felt just as well served. Perhaps even those who had flirted with something as powerful as the new Multistrada or even an even more powerful Panigale, because after all they were compensated with a novelty that stole the show from many a horsepower swank: the new Ducati Scrambler, a 75 horsepower Motorbike with petite dimensions and a successful mix of old and new impressed everyone. And hit the pulse of the times as well as the newly styled classic Yamaha XJR 1300 or countless other conversions that do not rely so much on technical innovation as emotional inspiration. Where this can lead was clearly demonstrated at the special exhibition for the Custom Bike World Championship in Hall 10. There, the creations of the world’s best customizers fought for fame and honor, while BMW just two halls down the road in the battle for market share decidedly ushered in the next round. The boxer models R 1200 R and R 1200 RS (MOTORRAD 22/2014) surprised with a formal dynamic that one would not have expected of the Munich-based company. A new edition of the super sports icon S 1000 RR, on the other hand, was to be expected – with even more performance and even more high-tech.

Yamaha, Ducati, Aprilia and Honda will follow suit, Milan is a superbike area. However, when it comes to a trade fair as a trend indicator for the new season, Cologne should at least be on a par with Milan.