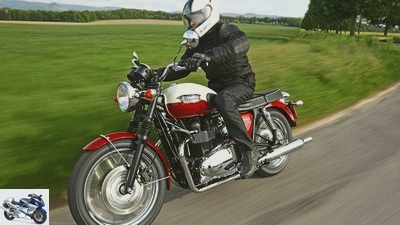 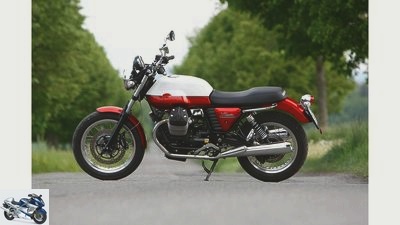 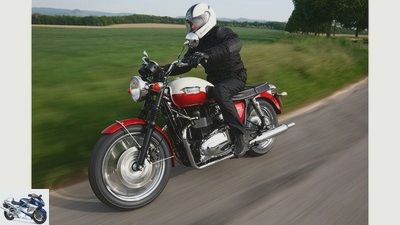 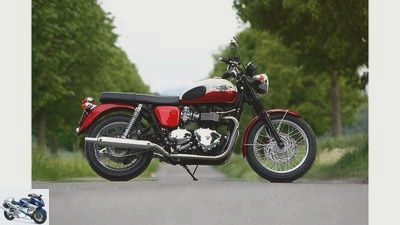 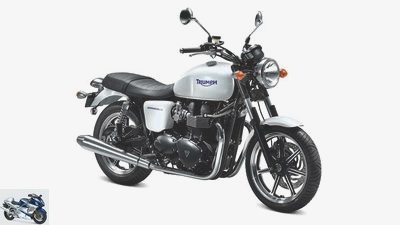 4/16
From 2009 the Bonneville will roll on cast wheels. As before, the basic model only has a speedometer and no tachometer like the SE. Otherwise only minor facelift. 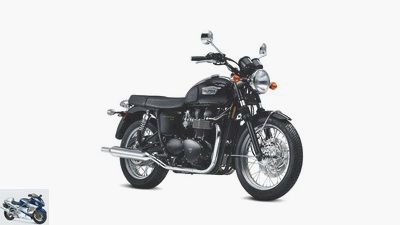 5/16
The popular special Black model has been sold around 500 times in Germany. Still on offer quite often. 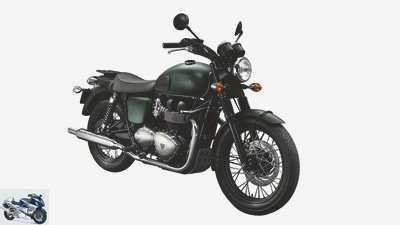 6/16
With a single seat and in matt black: the T100 McQueen edition, which has been sold around 1000 times around the world, is rare as a used one. 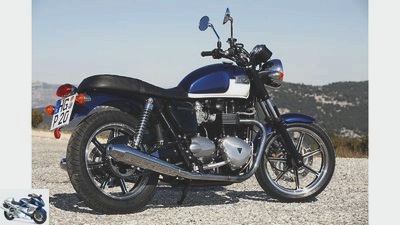 7/16
Easily recognized by the cast wheels and speedometer plus rev counter: Bonneville SE model from 2009. 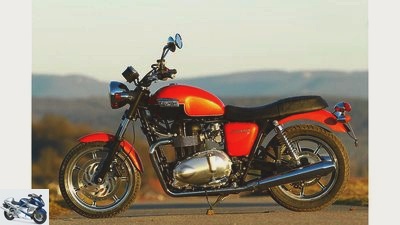 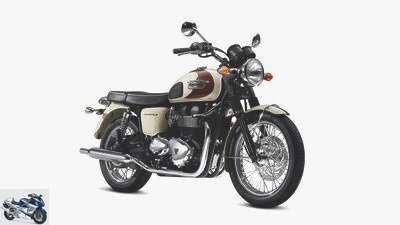 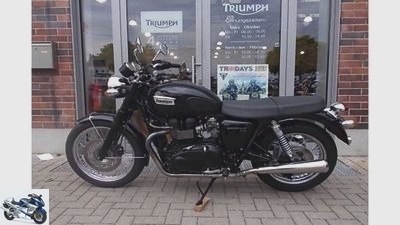 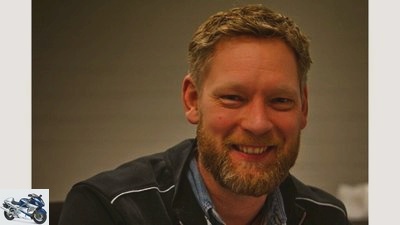 11/16
The Triumph branch in Dortmund offers many used cars in an exhibition space of 750 square meters. Marc Winter, 41 years old, is sales manager. 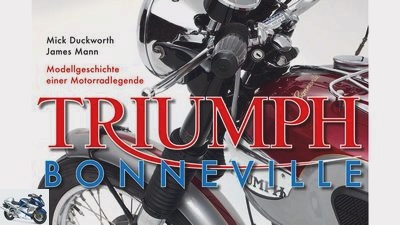 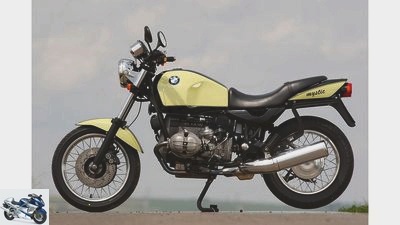 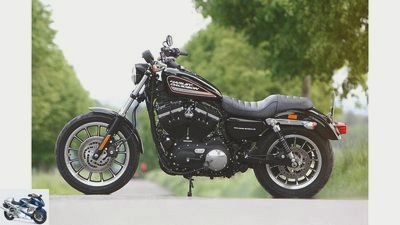 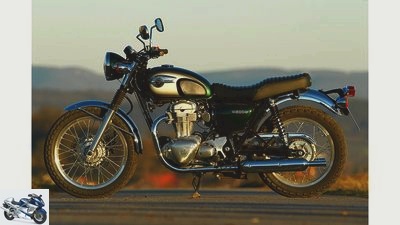 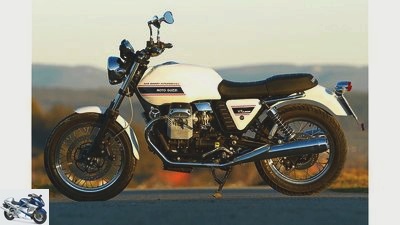 The Triumph Bonneville, built from 2001 to 2015, can’t really go fast and looks old next to many bikes. Pretty good. Regardless, fans like the old-fashioned beauty.

More retro is hardly possible. After all, the triumph can Bonneville look back on family roots that go back to the 1950s. The Triumph did not become a legendary motorcycle until the 1960s, when it gave actor Steve McQueen, among others, cause for enthusiasm (and heat) with its impressive 46 hp and 190 km / h top speed. The two-cylinder machine was awesome back then, a macho bike for expert riders. And nowadays?

It still looks almost the same, although technically it has little in common with the first series of Bonneville models, which also went under when the company died in the 1980s. After Triumph’s restart in the early 1990s, the Triumph Bonneville, which is described here, did not re-emerge until 2001. With a newly designed 790 cubic in-line twin cylinder, which was also used in Triumph’s mid-range cruiser America at the same time. The 61 hp didn’t knock anyone off their feet in the “modern times”, but that wasn’t the claim either. Curiously, the Japanese established a new retro class with the Kawasaki W 650 as early as 1999, based on the spirit of the sixties Brit bikes – it was logical that Triumph did not want to back off any longer. However, the trend initially passed the customer by.

Only a few understood at that time that the following can also apply to machines other than choppers and cruisers: performance is not everything. Since 2005, the Triumph Bonneville has produced 68 hp from 865 cc, and it stayed that way until the last model year 2015, including the appearance: 1960s style, authentic.

During the construction period there were a few minor changes (see model update) and additional and special models that differ only minimally from the basic model – T100, Black, SE, Anniversary and others. Basically, they are well-behaved and lovable motorcycles. What an evolution: the original Bonnie was excitingly fast back then – the retro Bonneville, on the other hand, is a tried and tested means for hurried people to cool off with pleasure. 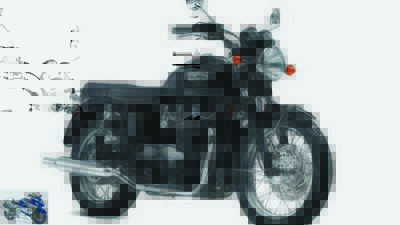 The popular special Black model has been sold around 500 times in Germany. Still on offer quite often. 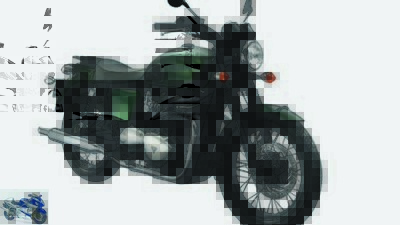 With a single seat and in matt black: the T100 McQueen edition, which has been sold around 1000 times around the world, is rare as a used one.

Since the new model was launched, many dealers have been selling the Triumph Bonneville at low prices. That depresses the used prices somewhat.

from 4500 euros
Example display: 23,813 km, EZ 03/2007, all wear parts are still in good condition. No maintenance or repair backlog, the machine looks very good, only a few small scratches can be found on the exhaust, 4899 euros (dealer from Braunschweig)

Low price level. Predominantly Triumph Bonneville with a 790 engine and often with more than 25,000 kilometers and visible signs of use are offered for less than 5000 euros. Overall, only a few offers are less than 5500 euros.

from 5500 euros
Example ad: 8500 km, EZ 06/2008, HU expired, first hand. Due to time constraints, I am selling the beautiful piece. A Triumph Bonneville deserves to be driven. Start the summer relaxed! 6300 euros (private provider from Hessen)

Medium price level. Although never really cheap, the bargain density is highest in this price range. If you are lucky, you will find little-used and well-maintained specimens at fair, negotiable prices of around 6,000 euros.

High price level. In particular, private sellers think they can use the retro hype around the Triumph Bonneville and sometimes have very exaggerated price expectations. Dealers rarely offer used vehicles that are older than three years. 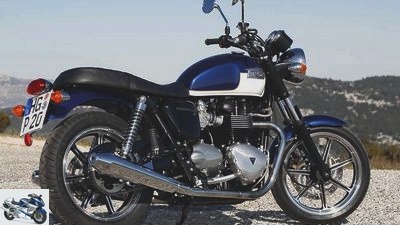 Easily recognized by the cast wheels and speedometer plus tachometer: Bonneville SE model from 2009. 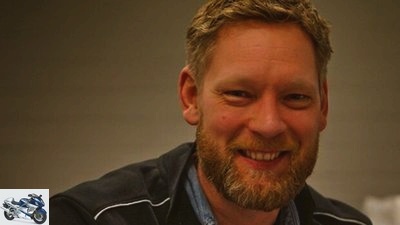 Marc Winter, 41 years old, is sales manager at the Triumph branch in Dortmund.

The Triumph branch in Dortmund offers many used cars in an exhibition space of 750 square meters. Marc Winter, 41 years old, is sales manager.

MOTORCYCLE: Your offer should cost only 25 percent below the old new price from 2011. So you are well in a direct comparison. Is the Triumph Bonneville so in demand that it goes away well for such high used prices?

Marc Winter: Yes, in any case. This motorcycle has long enjoyed enormous popularity. There are both older buyers who are reminded of their own youth in the 1960s by this retro bike, as well as many young buyers who like the authentic oldie look of this Triumph. You get a classic bike with reliable technology and cult status, and it rides without any problems. And because the demand is so high, the used prices are also very stable.

MOTORCYCLE: Now the new Bonneville with a 1200cc engine is entering the market. On the other hand, doesn’t the old Triumph Bonneville T100 look a bit old? Especially since the new T120 comes up with significantly more power and torque …

Marc Winter: Oh, you can’t say that like that. Logically, the new Bonnie is exciting and has quickly found fans. But they are not yet available in used form. The Triumph Bonneville T100 is still very popular as a used vehicle because it is technically uncomplicated to throttle to 48 hp. It is therefore recommended for newcomers to driving licenses and especially for those returning to the field and older people switching from the A2 driving license. For this clientele, the question of performance does not even arise. And with 48 hp, the T100 is still very easy to drive.

MOTORCYCLE: Interested parties differentiate between the 865 and the 790 engine installed until 2006?

Marc Winter: To be honest, hardly. I think for Bonnie prospects, looks are more important than the few horsepower. Externally, the 790s and 865s hardly differ, good maintenance condition and low mileage are considered to be more decisive.

MOTORCYCLE: Which accessories are popular with this motorcycle??

Marc Winter: There is a very wide range, from a lockable fuel filler cap to a complete Cafe Racer conversion, we’ve already had everything in the shop. The Bonneville has a large range of accessories; everyone can design the motorcycle to their liking. People like to use that.

MOTORCYCLE: And there are particularly popular colors?

Marc Winter: The special Black model has been in great demand for years. Dark paintwork is generally well received, so you are always right with black, following the motto “Black is beautiful”. 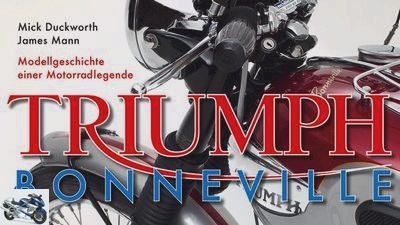 Book tip: Triumph Bonneville – a model story of a legend. 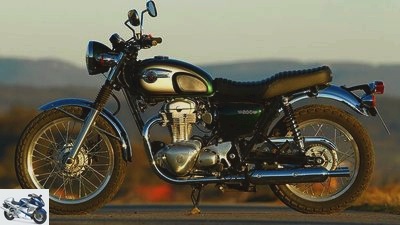 The competition: Among other things, the Kawasaki W 800.