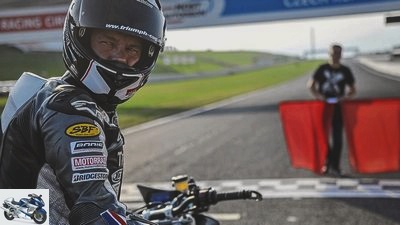 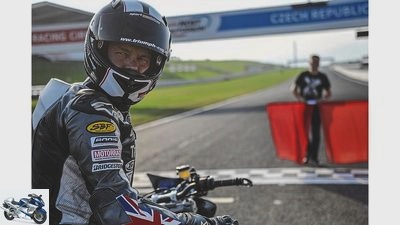 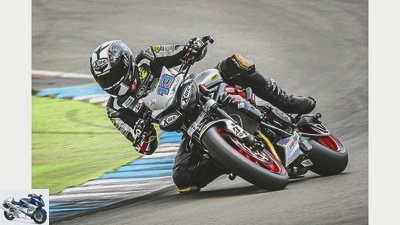 2/9
On the way forward: Uli and his Street Triple are now a well-rehearsed team. 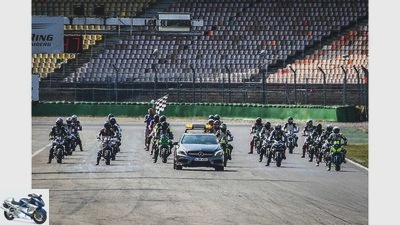 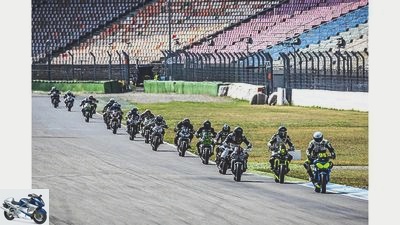 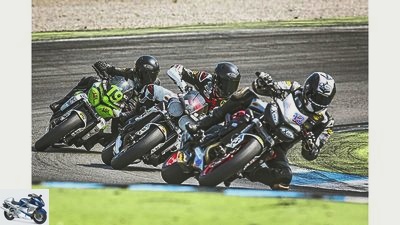 5/9
In formation flight: Uli Bonsels (# 13) fighting for third place in the Sachskurve in Hockenheim. 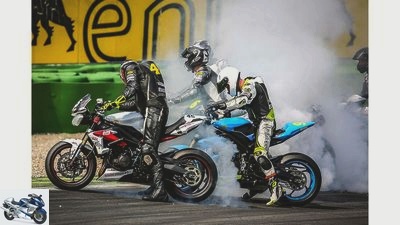 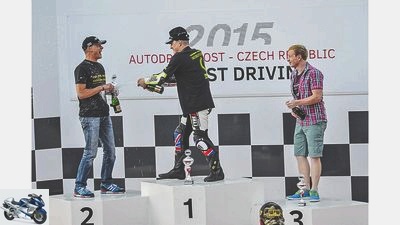 7/9
The best moment: Uli (left) in second place on the podium after a big race in Most. 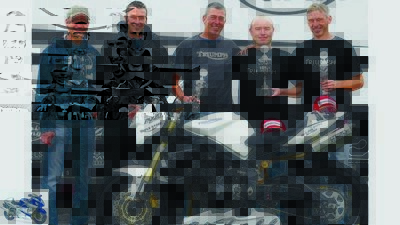 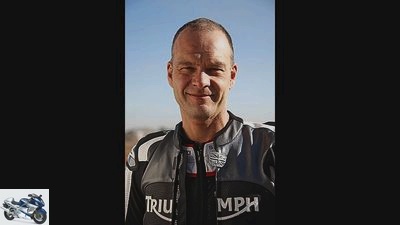 The combination is unique: Triumph press officer and customer service manager, T-Cup organizer and initiator, T-Cup participant, meanwhile T-Cup title contender. If he could, Uli Bonsels would also operate the starting lights and wave the checkered flag himself. Guaranteed.

It’s time to think about it, because it has never been so close as at the season finale in Most. It was only a few inches missing. Not even half the length of a motorcycle and it would have happened. Uli Bonsels would have won his first T-Cup race. And then? Then he should have seriously asked himself: Can I even do that? Can I win in my own cup? And with a view to the 2016 season: may I even become champion in this cup? Triumph’s compliance guidelines allow that?

Uli has worked persistently and with a lot of ambition since he entered the Cup as a permanent starter in 2012 that it could come to this at all. The Triumph customer service manager and press spokesman with an ideal weight (70 kilograms) would be a good role model for many middle management level managers who have been plagued by the midlife crisis. “Do you seriously think that without the Cup I would be able to train for 45 minutes on the home trainer twice a week in the morning before work?” He asks. No question about it, the man is serious. And that at the age of 52.

Professionalization of the T-Cup and T-Challenge

This also confirms his closer T-Cup environment. “Uli disappeared at ten o’clock after two beers on the race weekend,” says MOTORRAD action team boss Matthias “Schrotti” Schroter, the co-cup inventor, so to speak, who invented the cup in 2007 together with Uli Bonsels. “Uli wants to know, is meticulously prepared. And he has made a leap forward in terms of lap times in the past two years. ”In general, Schroter observed a not unpleasant professionalization of both series, the Street Triple Cup and the Triumph Challenge. “The days when the day before the race was celebrated until late at night are over.

“In view of the pace that is now being gone, that’s no wonder.” What Schroter means can be read in the lap times table like this: Depending on the external conditions, the T-Cup top in Oschersleben achieved 1.34 to 1.36 lap times, while the Challenge, with its stronger, tuned and fully disguised Daytonas, is awe inspiring 1.32s worked down. And another house number: In Hockenheim on the GP circuit, the fastest of the Challenge 2015 were on the road with 1.48 laps, the T-Cup leaders also did brilliantly with 1.52 times.

Uli Bonsels finished third at Hockenheim with a gap of almost five seconds and drove a low 1.53 time. With a motorcycle with 106 hp, where engine tuning is expressly prohibited and chassis tuning is only permitted to a modest extent (Ohlins kit, brakes). “This performance would not be possible at all without the further development of the tires”, Uli is certain. Bridgestone has been equipping the Cup and Challenge for years, currently with the Bridgestone Slick, which participants can buy from Bridgestone Service on site at special rates.

In general, the conditions: A Cup package 2015 cost 9,990 euros. This included a new one Street Triple RX with standard gearshift, an LSL footrest system, brake and clutch levers from LSL, flyscreen and pillion cover, front spoiler, Bodis silencer with dB eater, X-Lite helmet, Castrol lubricant package, all patches and stickers as well as all entry fees for five events with two races each including the associated training. A fair offer that was also discounted again for the fastest because, in addition to the trophies, additional prize money was awarded. The winner received an entry fee voucher worth 2000 euros. At this point at the latest, Uli and “his Cup” come back into play. And the question asked at the beginning. Triumph will likely have to reduce its financial commitment, but the Cup at the MOTORRAD action team will continue to exist. And Uli will start again. He doesn’t want to think about anything else until his first win.

A muzzle of reason

go to Article
To home page 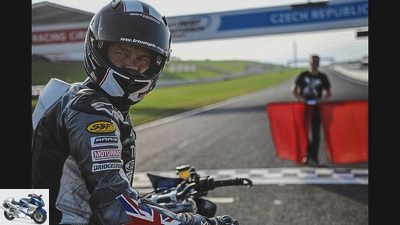 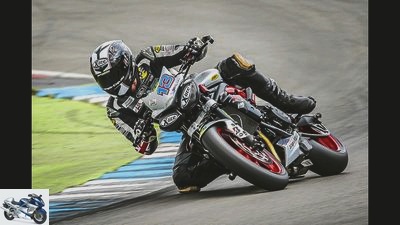 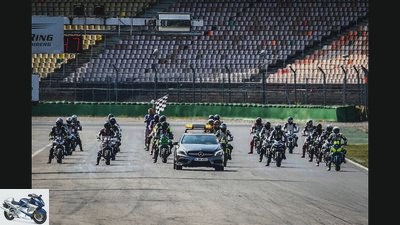 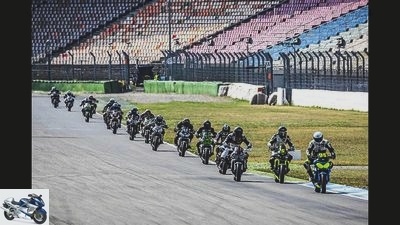 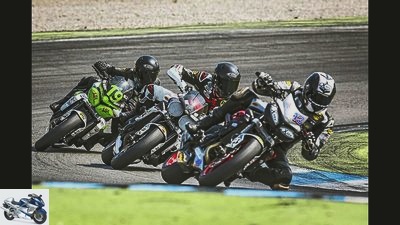 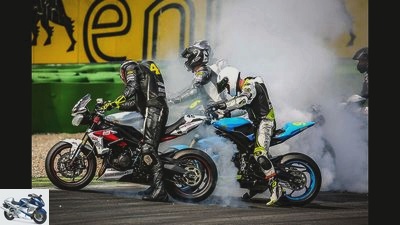 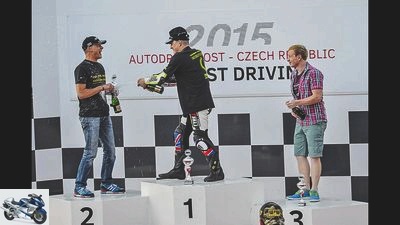 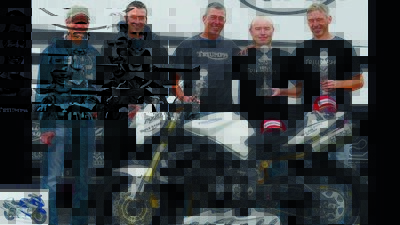 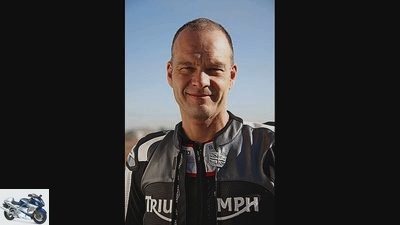 “And then the demands grow”

Triumph press spokesman and T-Cup starter Uli Bonsels on the long history of the T-Cup, his entry into the cup – and why he gets faster and faster in old age.

MOTORRAD: Uli, when we talk about the beginnings of the Street Triple Cup – how far back do we have to go?

Uli Bonsels: It basically started back in 1995 with the old Speed ​​Triple T 300, the iron pig. The organizer in Germany at the time was Wolf Tons. The cup was also held in England and France, there was a European final in Le Castellet in southern France as part of the supporting program for the 24-hour race. That was what Franky Heidger won back then.

MOTORCYCLE: And then? You also drove with the T 595, right??

Uli Bonsels: Yes, that must have been 1998 and lasted until 2000. For 2001 we then added the TT 600. 2003 came to an end – until 2007, when the Street Triple was presented. At the press presentation on Lake Garda, I thought over a good glass of red wine with Schrotti (Matthias Schroter, then PS, now MOTORRAD action team, A. d. Red.) That this great motorcycle absolutely needs its own cup. It all started in 2008 with Sport Evolution and Dietmar Franzen. Back then he was already driving our Daytona 675 and Rico Penzkofer in the IDM and then organized the Cup with us in 2008 and 2009. In 2010 your action team took over the cup. The starting fields were jam-packed. In places we had 36, 37 starters – just like in recent years with our Triumph Challenge, where everyone from the Daytona 675 to the Speed ​​Triple is allowed to drive.

MOTORRAD: When exactly did you enter the Cup??

Uli Bonsels: I didn’t ride the very old Speed ​​Triple. When the T 595 came, I started making the first guest starts. I wanted to drive a whole season there, but fell at the airfield race in Dalhemer Binz and hurt myself. I drove the first full season in 2010.

MOTORCYCLE: And how did you experience the sporting level?

Uli Bonsels: That was always relatively high, but I knew that. By the way, they were really quick in the old Speed ​​Triple Cup too. Back then, people like Franky Heidger and Claus Ehrenberger also went along. That went off. And it’s still the same today, when the guys from the Cup ride somewhere else, they are usually at the front. Then people are always amazed at how fast you can drive with 106 hp, high-handlebars and without any traction control. But that’s exactly what makes it so special.

MOTORCYCLE: Where were your own ambitions when you started??

Uli Bonsels: I had no ambitions when I got on board. I just wanted to have fun, race track, a little competition. But over the years, of course, you try to move yourself forward a little, to improve yourself. And then of course the demands also grow. That’s obvious.

MOTORCYCLE: What makes the Cup so special? What is there only here, what is special?

Uli Bonsels: I am sure that there is great camaraderie here. In the T-Cup – as in the T-Challenge, by the way – everyone helps everyone. I can only remember one real idiot over the years, but everyone cut him. I don’t know why, but it’s a collection of super sympathetic people. For me, these are the best weekends of the year.

MOTORCYCLE: Is that also because a naked bike like the Street Triple arouses less fear of contact for racing novices?

Uli Bonsels: Probably. On the other hand, it’s no different in the Challenge, even though it’s a real supersport motorcycle.

MOTORCYCLE: Is there a typical T-Cup driver?

Uli Bonsels: Basically we are broadly positioned, but most of them are between 40 and 50 years old. Our age (laughs).