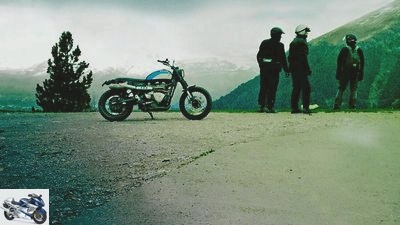 With the &# 34; crime scene&# 34; author and Triumph scrambler through the Pyrenees

Follow the well-worn paths of the Trans-Pyrenees rally with bag-heavy Triumph scramblers, lightweight crossers and enduros? That sounds like a real two-wheel crime thriller. A case for ARD-“crime scene”-Author Uli Bree, who went on an adventure with three motorcycle-crazy warhorses.

Burt Munro once said: “If you don’t risk something every day, then you can just as easily be born as a vegetable.” He’s right. But you’re kind of a cowardly dog. Risks and adventures are relative. On the other hand, manageable risks can also be quite adventurous.

My friend Helmut gave me the idea: the Transpyrenáica, a road book rally that leads across the Pyrenees from the Mediterranean to the Atlantic. No less than 1300 kilometers off-road. Difficulty level from “leisurely” to “relentless”. You actually ride something like that with hard enduro bikes that weigh 120 kilos. As an old enduro rider, I knew that that wouldn’t challenge me enough. And if you are about to land precisely in the midlife crisis, then MAN simply has to set the new hurdles higher. At the same time, my friends Jens vom Brauck, JvB for short, and LSL boss Jochen Schmitz-Linkweiler built the Rumbler, based on a Triumph Scrambler, for the Tridays I organized. When I came up with the suggestion to pull this really noble promotion machine, built with the finest Ohlins components, 1,300 kilometers through the Spanish mud – and that before the official presentation – the two of them just looked at me in disbelief.

But set off on your own? I just had to find some crazy people to make life difficult for. So I submitted my idea to Jens vom Brauck, Jochen Schmitz-Linkweiler and Wim Peters von -Ohlins: We would drive the Transpyrenáica on 220 kilo Triumph Scramblers – and they would be the crazy people I had chosen, my absolute dream team. Four men between the ages of 41 and 62 on motorcycles who, like yourself, would be completely unsuitable for a tough road book rally. Four Scrambler for a hallelujah! The enthusiasm was of course limited. 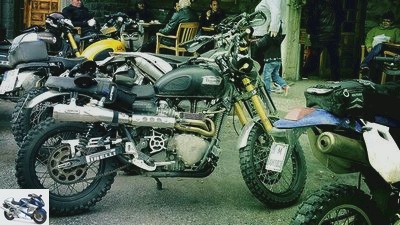 KTM or Yamaha crossers. But also the Triumph Scramblers trimmed for off-road make their way over hill and dale.

After I had finally played off the three against each other with all the psychological tricks at my disposal, legal drugs, appeals to the honor of men, senseless promises, skillful trivializations and submissive postponements, the madness could begin! Triumph Germany generously provided us with four scramblers – and the conversion began. We wanted to tailor the motorcycles individually to the respective needs, and so four completely different creations came about. After six months of intensive motorcycle and subtle body tuning, it finally started in May.

The logistics alone were an adventure. Especially since we still had a film team on the heels that wanted to prepare the madness on four wheels for the channel Servus TV: the director and cameraman accompany you on light hard enduro bikes, another cameraman sits in a jeep with a guide, sound engineer and production manager Always comes in at the agreed and passable places. Organized adventure could be said now. More organized chaos! But you get a lot to practice when the director demands to drive up and down each steep slope x times for the different shots. In addition, after a tough, exhausting twelve-hour ride across the Pyrenees, you should make film-ready statements for the camera, even though you longed for nothing more than a hot shower. 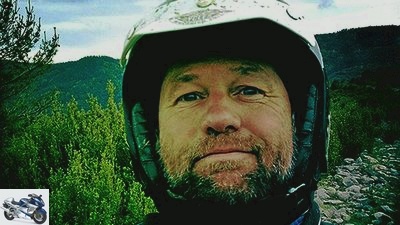 Uli Bree, who went on an adventure with three motorcycle-crazy warhorses.

Even if that sounds strange: It wasn’t just a real adventure! It was really awesome too. Although it was also really cold and wet, and then again hot and relentless. Until finally the hailstones hit us. In the middle of May in Spain: The layman expects everything, just not snow and cold. If you fight your way up into the mountains at over 2000 meters, it can also happen to you in Spain, Andorra or France. But after all, we really wanted to experience something. And for some reason, people believe that a real adventure includes real suffering. So we suffered. Sometimes dignified, sometimes less dignified and sometimes very violent – with a good glass of red wine in hand. We drove through dreamy areas, crossed magnificent mountains and sometimes we just lost our breath out of sheer admiration for the beauty of the Pyrenees. Somehow this area is reminiscent of the Dolomites – only without cars. Because if you get lost on the winding roads, you are almost as lonely there as in the open country. And thanks to EU funding, the roads are in excellent condition.

When we finally reached the Atlantic, completely exhausted, we were a few pounds lighter, pretty dirty and really good friends. We had an idea and didn’t leave it at that. We had taken half a year of preparations and efforts to experience this adventure. Sitting in front of the telly and watching football can also be very nice, but a tour like this is unforgettable. Most football matches don’t. 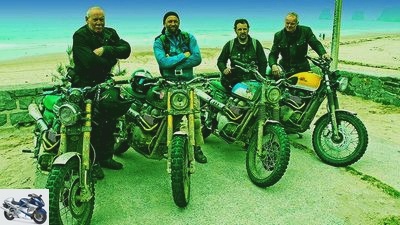 The Triumph Scrambler and theirs “conqueror”.

If the scramblers went on strike, it was only when they were brought down. Wim Peters was their toughest opponent. Grown up on Dutch cross slopes, the old warhorse pulled the throttle so relentlessly that not only the stones flew, but he too. Once the Flying Dutchman was hit pretty hard when he ran into a slower hard enduro group. The nose was bloody, the front brake out of order, the judging went on to the next village. All four motorcycles were specially prepared for the tour, but each with a different focus. Wim Peters (see picture: left) was on the road with the MX package, which includes, among other things, Ohlins fork and shock absorbers. Conversion price: 13,000 euros. Uli Bree (2nd from left) sat on the newly designed Rumbler, also with an MX package (17,620 euros). Jens vom Brauck (2nd from right) relied on Triumph technology for the Dirty Deeds, but his own design (price on request), and Jochen Schmitz-Linkweiler (right) with the Trophy Trail on Triumph optics, LSL terrain kit and Yamaha TDM fork (10,400 euros). Info: www.lsl.eu