Uncommon in France but popular in Italy, the Xenter is in line with the Honda SH 125 and other MBK Oceo, Peugeot Vivacity and Piaggio Liberty … scooters with large flat-bottom wheels: a more elegant alternative, often more practical and above all more accessible than more massive scooters. 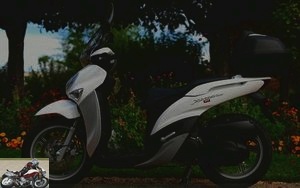 The Xenter is distinguished first by its large 16-inch wheels, a high apron, then by a seemingly thick rider saddle. Compared to conventional scooters, there is above all a flat floor, not only allowing you to pass your legs easily without having to step over a central beam but also to be able to accommodate a very large bag. The double almond optic finishes the picture. 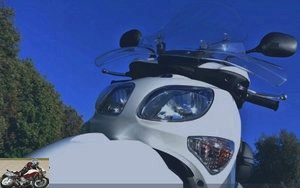 Note the LED light at the rear. The whole offers a nice overall line and very discreet handles elegantly hidden in the support of the parquet rack.. 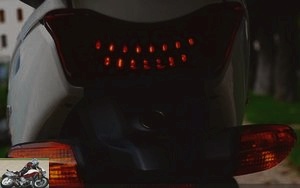 Equally discreet is the almost invisible monocross shock absorber which replaces the usual double shocks. In this test version, the Xenter is also equipped with a high windshield including hand guards and a top case in the colors of the two-wheeler. We finally appreciate the top finish, from start to finish. 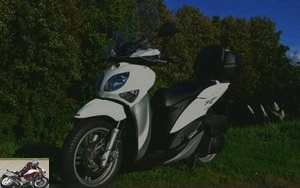 The feet touch the ground for the 1.70 m rider with a lower saddle height and above all thinner than an XMax. In fact, the flat-floor scooter is more accessible than many 125 scooters. The hands naturally fall on the rather narrow handlebars. A small glove box or ticket box is hidden at the level of the central axis under the meter.

In front of you, the fully digital dashboard is reminiscent of a generation of GS with very large LCDs. Above all, it is complete and easily readable with speedometer, fuel gauge, clock, outside temperature thermometer, partial double trip, indicator of kilometers traveled on the reserve, belt change and oil change. No warning, no warning light, no parking brake, no side stand on the other hand. 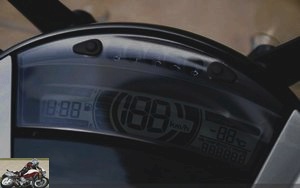 The Xenter snorts in a quiet barely audible noise. The feet are placed on the flat bottom and the right handle makes it go smoothly. The handlebars are similar to a bicycle, in particular by its very "right" steering angle and its featherweight of 142 kilos (all full). All this allows you to turn in a pocket square with a particularly short turning radius. No experience is needed here for the grip, which occurs naturally, aided by an upright and natural driving position. The approval is then at the rendezvous especially as the single cylinder distils absolutely no parasitic vibrations. 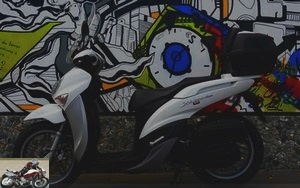 Lightweight, manoeuvrable, the Xenter easily weaves its way through traffic. The passage between stationary cars is made all the more easily as the width is particularly narrow and one does not wonder at any time whether it will pass or not, rub or not. The particularly light weight and the very short turning radius end up allowing even easier maneuvers than with an XMax type scooter. With its only 12.5 horsepower, the pickups are far from dazzling but that’s enough to slip through the flow of traffic on a daily basis..

The front apron provides excellent protection for the legs, placed in the center of the flat floor. The high windshield helps, and the bust being close enough to the windshield, it is almost possible to have your legs practically protected from the rain. 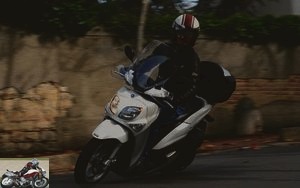 The Xenter rushes without vigor on the highway, slowly increasing in speed to 90 km / h to peak at 110 km / h when well started, odometer, or 104 km / h real. There is no question of resuming at this speed and we then sit quietly on the rightmost lane so as not to move. At this speed, the high windshield generates eddies and noise in the helmet. We also feel the turbulence and the wind on the legs, which we force ourselves to place well in the center to avoid having the pants slamming. This speed is maximum for the Xenter, which in windy conditions and aided by the windshield and the top-case, undergoes a slight shimmy in the handlebars giving an impression of floating: never worrying, but the whole thing encourages you to be light on the right handle. 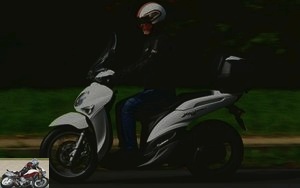 In fact, the Xenter finds with satisfaction the departmental where the pace can slow down. Lightweight, manoeuvrable, the virolos can be linked together at a regular pace allowing you to admire the landscape in peace. At lower speeds, the inconvenience and eddies generated by the high windshield are also less and acceptable. This windshield is especially justified in the event of bad weather, protecting the whole body and in particular the legs from the rain.. 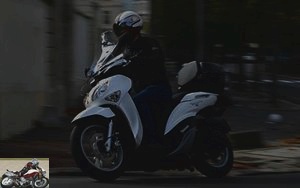 The first impression given by braking is … spongy … and slow. At first we have the impression that we are not going to stop. And then, you get used to braking which can be powerful if you take the brakes well and apply very strongly. In which case, we manage to stop quite quickly. The scooter is also not particularly swift and therefore does not require oversized braking. You just have to not arrive too fast and get used to taking the brakes well. No ABS here but effective combined braking that makes it impossible to lock the rear. The left lever therefore operates the 267 mm front disc and the 150 mm rear drum simultaneously. Over the miles and weeks you get used to the braking sufficient for the power of the scooter. We just regret the lack of feeling and bite but on the contrary braking will not surprise a novice. 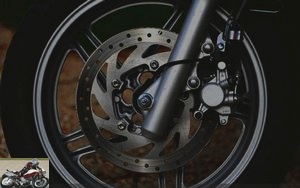 The Xenter offers an imposing saddle for the rider, with the apparent outer thickness. Helped by an efficient monocross system, the whole thing offers homogeneous comfort in the city, but nevertheless makes you feel the defects of the road as soon as the road deteriorates.. 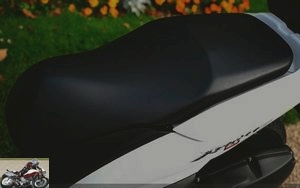 The saddle discovers … a mini-bucket containing a few tools: not really room here except by packing pants OR a rain jacket but no more, not even a standard lock which will prove to be too high. The top-case is an absolute necessity here, especially since the one proposed "original" is elegant and relatively spacious inside compared to the impression given on the outside. It allows you to accommodate a good bag and then a modular and a rain suit..

It is above all the flat floor that allows a large shopping bag to be placed in the middle and eliminates the need for a large trunk to transport large volumes. We can even suddenly transport more and more easily, a relatively large weight due to a center of gravity that remains low..

The reserve engages on average after 210 kilometers…. while the dedicated trip counts the number of kilometers traveled. With 6 liters out of the 8 liters of the tank then consumed, there is then still 2 liters of reserve for an overall autonomy of 290 kilometers, with an average consumption of 3 liters per hundred, or even a little lower in the event of driving on and off. fast lanes. 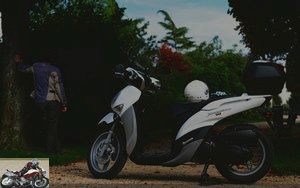 Elegant, the Xenter differs from traditional scooters mainly by its flat floor. With windshield and top-case, it offers extra protection for bad weather in the city. Particularly handy, it allows easy handling, even for small sizes who will quickly feel at ease even without the slightest experience. At 2,999 euros, it is one of the best placed in terms of the price of Japanese 125 scooters…. with a finish justifying the price.

Available in 3 colors: white and black

The technical sheet of the Xenter 125