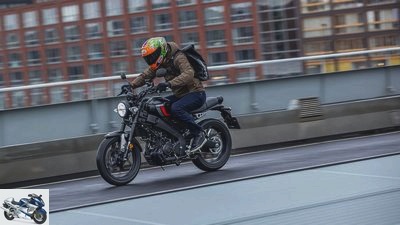 Yamaha is now bringing retro to the A1 class too. The XSR 125 keeps its sporty siblings company from now on – and is even one step ahead of them.

Without any sporting ambitions, you haven’t found anything with Yamaha’s 125 cc so far. The super sporty YZF-R125 and its naked sister MT-125 are at the forefront in terms of performance in the A1 class, but those who like it a little more elegant – also optically – will be happy about the latest creation from the Japanese: the XSR 125.

The centerpiece is shared by the retro 125cc with its sportier sisters. Currently, it is even one step ahead of them and is starting with the revised eight-liter engine in Euro 5 trim, which MT and R will only get at the turn of the year (they will still be sold as Euro 4 bikes with a special permit in 2021) . The changes concern, among other things, exhaust valves that have been shrunk by one millimeter and a revised intake tract. But the most important thing has remained: The variable valve control (from Yamaha “Variable valve actuation”, called VVA for short). Thanks to two different cam profiles on the intake side, which are electronically switched between at 7400 rpm, Yamaha’s 125ccm creates a very wide balancing act between start-up power and top performance.

This is also the case with the XSR 125. It accelerates bravely from the traffic lights and works up to cruising speed well above the class average at medium speeds. Switch early and tour – it works. Also because the XSR throttle commands and load changes are carried out conspicuously inconspicuously at any speed. Above all, the single cylinder reveals speed reserves that are surprising. It increases performance up to the five-digit range and can therefore also be really athletic. The driver only hears something of the VVA switchover through a mechanical clicking noise if he listens carefully.

On the first exit, the engine was satisfied with 2.7 liters of petrol per 100 kilometers with a very committed driving style, which is why the Yamaha factory specification of 2.1 liters seems realistic. If you set the gas hand to economical, you will be able to cover long distances with the 11 liter tank.

Sound of the Yamaha XSR 125

And the sound? Quite a large volume for an eight-liter stew, acoustically pleasant even at higher speeds, not intrusive. Standing noise: 86 dB (A).

The power is transmitted by the smooth gearbox with precise detent and not too short shift paths. The XSR 125 forgives over-ambitious downshifts thanks to the well-functioning anti-hopping clutch, which reliably controls the braking torque of the motor before the rear wheel punches.

Brake smaller than with siblings

Speaking of brakes: The XSR 125 has shrunk it compared to its A1 sisters. An axially attached two-piston floating caliper presses the pads at the front onto a disc that is only 267 millimeters in diameter. That delays as one would expect: if you hit hard, you get full braking power, but two-finger brakes reach their limit beforehand. The dosage itself fits, but after a medium delay, the force required in the forearm increases sharply. If you take a bold step, you will find ABS that is good because it is late, but safe and finely regulated for the class. The XSR also owes the fact that it has to intervene late to the good grip tire (IRC Trail Winner GP 211), which rolls gently, develops almost no righting moment even when braking in an inclined position and even cuts a good figure on wet roads.

Compared to the MT-125, the seating position has been changed significantly, although the frame has remained the same. On the retro bike, the rider sits further back (the pegs seem to be further forward) and the handlebars have become significantly higher and wider. This results in a relaxed position at a height of 810 millimeters, which at first doesn’t feel like a 125cc. In motion, however, it becomes apparent that, according to Yamaha, the XSR should weigh just 140 kilograms. On the wide handlebars, it only takes minimal impulses to fall over the narrow tires (front 110 / 70-17, rear 140 / 70-17) and the XSR can be easily swung around the arches from the hips. It remains very agile up to over 100 km / h, while cornering unexcitedly stable.

Chassis of the Yamaha XSR 125

The Yamaha copes well with rough roads. The comfortable spring elements basically do a good job and are also sensitive to the A1 segment. The shrunk 37-millimeter upside-down fork (instead of 41 millimeters for the MT 125 and R 125) comes to the limit of the available suspension travel when braking over bumps and rushes hard on the rubber buffer. Not a drama and not uncommon in the class, but the sporty siblings clearly score better here. For relaxed commuting or touring, the chassis setup of the XSR is best for this.

A lot of freedom of movement on the bike is also good for longer tours, sliding back and forth is almost unrestricted on the XSR 125. And there is also a surprising amount of space for a co-driver. The knee angle is okay, the seat cushion is soft – actually only the handles are missing. Although, it is safer (and more comfortable) to hold onto the driver anyway.

As mentioned, it also enjoys a good level of comfort, but at best would like a slightly less reflective cockpit. The latter is classically round but digital, the speed can be seen at a glance, but you have to take a closer look for speed or gear display.

The XSR 125 is available from 4649 euros including ancillary costs. It is Yamaha’s cheapest A1 bike and is available in red, yellow or black. The accessories also include many accessories for customization (e.g. a bikini panel).

The XSR 125 is just right. It should appeal not only to the young, but above all to B 196 certificate owners, because optically it could easily be a 300. The balanced and easy driving behavior was just as popular on the first trip as the VVA eight-liter engine, which is now Euro 5 compatible and manages a wide balancing act. Reductions in braking and chassis performance are due to the concept (and the price), but do not interfere with everyday use.