Fashion is retro and hype, with in particular the multiplication of events such as Bike Shed or Wheels and Waves, which bring new lovers and enthusiasts of motorcycles, admiring admirers of preparations and models never seen before.. Usual materials are disappearing in favor of new forms, sought-after materials, accessories drawing on history for the form but in the latest technologies for everyday equipment. It is in this line that Yamaha began to work on its Yard Built project and its Heritage series. Some see it as a recent fad but Yamaha dates back to 2010 its first Yard Built proposals of which the XSR 700 is only the most recent proposal, but not the last since many other motorcycles are already in the pipes having passed the stage of cardboard. However, the days when each model included a new frame, a new engine and entirely new parts are over. So we reuse as much as possible, which makes it possible to offer new motorcycles, more accessible at the price level, even aggressive in terms of price. The XSR is in this perspective, by proposing a new model, neo-retro, based on the MT-07 of which it shares the same engine and the frame for the most part but taking inspiration from the XS of 1970 and even from the SRX from 1985. So, an MT-07 with XS sauce and all is said? Test drive on the small winding roads of Sardinia… 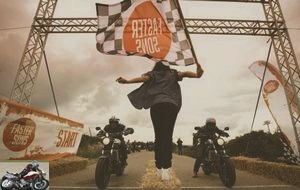 An MT-07 ?! No observer can say it because the XSR is a motorcycle with its own personality in terms of looks. Certainly, the real biker will recognize the engine and the main part of the frame, shortened here. But for the rest … The XSR even claims that it cannot be attached to any category: neither bobber, nor scrambler, nor tracker… 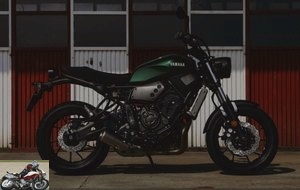 High … It almost looks like a small Trail because the XSR seems so high. It actually peaks at 815mm, or 15mm more than the MT-07. Fortunately its weight remains light with 186 kilos. And then the saddle was notably refined. The oblong, cylindrical front headlight seems to come from another era. And this is the case, since it is the occasion for the designate in chief to release his old bike, from which the lighthouse inspired him. At the rear we find a small round LED headlight reminiscent of the old reflectors but also the Bolt light. The saddle … The saddles seem to be sewn by hand, varying from the two-seater leather saddle to the single-colored model depending on the model but always with the XSR inscription as embossed on the back. 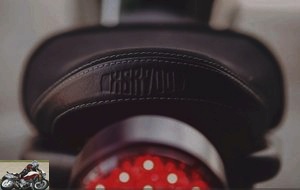 Because Yamaha offers forty accessories that allow you to customize your motorcycle so that it is never quite like the neighbor’s. It is not tuning, it is customization and it is similar to the creations of garages like Blitz or Sands. The tank itself is modular … By this mean that there is a steel tank, covered with aluminum side plates fixed by nuts. It is thus possible by unscrewing 8 screws, to simply change the look of the machine in a few minutes, without having to disconnect the hose and other fixings. Thinner, thicker, with or without reinforcement, in bare brushed aluminum or with rubber … Everything is possible. Even the tires have taken on the seventies look of the old Pirelli Phantoms. Fortunately, the compound is new and provides more grip than the rubber of the time.. 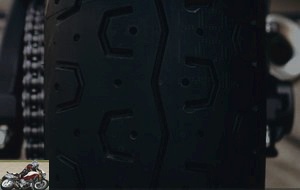 Then comes the attention to detail … All these small parts that bring a touch of nostalgia and finish the machine, from the XSR logo embossed on the tank to the small aluminum plate between the fork tubes or on the top of the headlight , up to the side grid of the tank and the side plate with the three mesh holes. 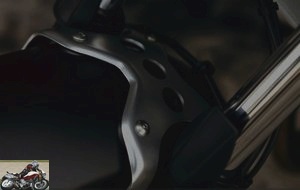 Finally, only the huge prominent radiator swears a bit overall.

We step over the XSR which culminates at the same height as some trails. Fortunately, the bike is light and especially the saddle very thin, even if it weighs four kilos more than the MT-07. Suddenly, even if the feet do not touch the ground for the pilot of 1.70m, one finds its place there naturally. Better, this ease is also found on small cross paths where the differences in level could increase the difficulty caused by the height. The hands move away slightly to fall naturally on the handlebars. The position itself is close to that of a Trail, almost straight and straighter in any case than on the MT-07.

Under the eyes we find a round, fully digital meter, which manages to integrate a meter, but also a gear indicator engaged and the alternate information provided by the on-board computer: totalizer, double trip, partial, clock, average and instantaneous consumption, engine and exterior temperature. Everything is readable and within easy reach without having to leave the road to check speed or engine speed.. 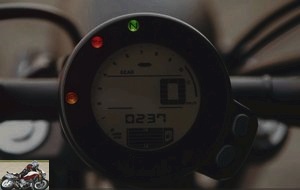 We turn the key behind the meter, on the lighthouse. The pot placed under the engine which is barely extracted distils a low, almost hoarse sound that is quite sympathetic. First, the twin wakes up and invites you to spend the second. 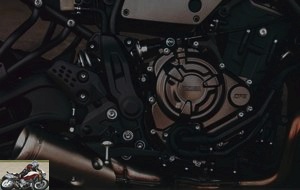 The Twin is strong-willed, nervous, distilling its vibrations and reactions to the throttle. It’s the same engine, up to the secondary transmission, but the XSR seems like a different machine, an illusory impression probably prompted by the significantly different position.. 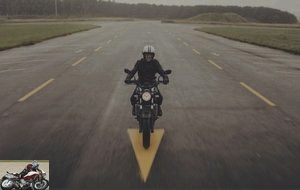 Because these are not the only injection modifications made to pass euro4 standards that can justify this impression. Large lever arm helping, the machine easily weaves its way through traffic. U-turns are easily done in a handkerchief, aided largely by the position, weight and tight turning radius. Only the rear brake seems nonexistent in town, barely effective in slowing down. On the other hand, the front brake offers an excellent feeling and a power to go largely sufficient even in the event of surprise. The abs is here less intrusive and difficult to put into action. One would have thought that the twin would accept everything but it finds its limits on the last report, which you will never pass in town. We could almost believe then to be on a big mono (almost we said). It hits well at 40km / h at 1750 rpm and encourages either to accelerate to exceed 50km / h, or especially to downshift to stay in second or third gear, clearly the most common gears in town. 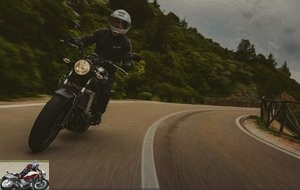 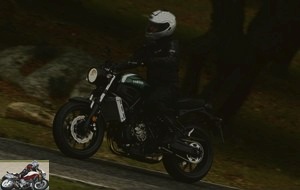 The XSR returns to the small roads with impressive neutrality. It sits just naturally, no more, no less, able to quietly wind up in fifth gear or attack on second and third gear..

Because whoever seeks the gnac will be better on these reports which allow the twin cylinder to pass the bar of 5,000 and especially of 6,000 rpm where it reacts instantly to the handle and makes you want to send a little more. It is also close to its maximum torque of 68Nm reached at 6.800rpm. Because below 4,000, the twin is slower to resume and struggles to express itself for those who want a fast pace. On the other hand, it will be suitable for those who especially want to enjoy the landscape with a quiet stroll and a leisurely pace.. 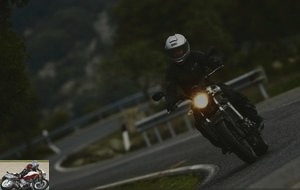 It is so neutral that when the pace picks up, we would appreciate a little more weight on the front in order to have a more incisive front end even if the precision remains at all times..

The saddle is comfortable. It welcomes its driver on board without roughness and allows to move easily in the sequences of virolos. It remains after a small folding seat for the passenger. On the road, comfort is ideal while the tape is perfect. If the pavement deteriorates, the shock absorber offers a fairly sharp rebound. However, after two hundred kilometers of uninterrupted virolos, no beginning of fatigue appears thus finally offering a very acceptable comfort.. 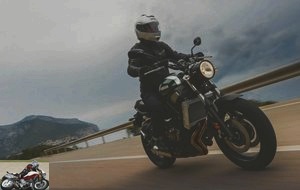 The rear brake is hardly a retarder, even soft in sensations under the pedal. The first kilometers are even questioned as to its usefulness until arriving on small departmental roads. It then suffices a light pressure when entering a turn to position yourself and have just the efficiency you expect, without having to touch the front brake..

The double front 282mm petal disc offers on the contrary an excellent feeling and above all an instantaneous power while being progressive with all the necessary bite.. 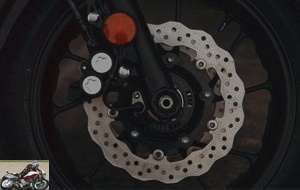 Yamaha announces a possible range of 300 km, thanks to low consumption supported by the 14-liter tank. However, the first kilometers handle in the corner announced rather a consumption close to 5.7 liters before at the end of the day, the consumption does not stabilize according to the drivers but on the same route between 4.7 and 4.8 liters per hundred according to the on-board computer. The autonomy is then 250 kilometers. 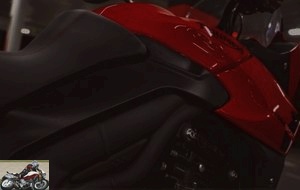 There is sometimes a little room under the saddle. Nothing like that here. On the other hand, there is a very small tool kit placed under the saddle and retained by a rubber and on the frame, from locations containing a few keys and the screwdriver, thus offering a kit spread out in two places. 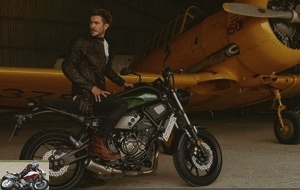 The XSR is an excellent machine, dynamic, light and easy to handle, even for small riders and especially for A2 licenses. With significant customization possibilities, everyone can have their own bike, leaving the usual line of industrial models by approaching a preparation (or even a real preparation with JVB) and able to also serve as a basis for a real customization simply and not. not ostentatiously but unique. But above all, with a frame and a proven engine, it is the possibility of achieving the dream of customization but for the price of a quality production motorcycle (7,699 euros with ABS is well below a less versatile Ducati Scrambler), capable of doing more than picking up the baguette on Sunday morning. Ultimately, the intrinsic characteristics of the machine take less importance in this hypster trend, but Yamaha here guarantees a connected AND reliable machine that will appeal to a whole new generation of drivers who will also appreciate its playing side and its versatility. And for the more chauvinists, the XSR is assembled in the factories of Yamaha / MBK Industrie in Saint-Quentin … one more reason to crack ?